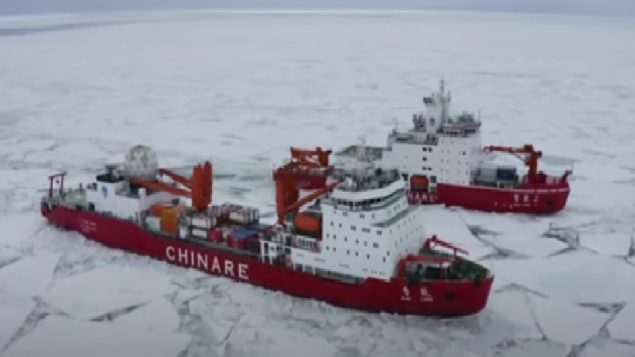 Currently under review by the federal government, the $207.4 million dollar offer raises concerns not only  over China’s increasing control over the precious metal and other strategic resources but also concerns of sovereignty and of potential security in the Arctic.

Black square indicates approximate location of TMAC gold mine in Nunavut. about half way through the Arctic NW Passage. ( google)

Chinese companies have been acquiring other gold producers around the world, and the state owned Shandong Gold Group is part of a national effort to stockpile gold as a hedge against economic volatility.

China has also been engaged in an effort to control rare earth minerals and already owns copper and zinc assets in Canada’s Nunavut territory. Zinc is an important element in the making of galvanized steel as well as use in computers, mobile phones and other electronic equipment, and in batteries.

In an email to RCI, former Canadian diplomat to Hong Kong and the U.N, Colin Robertson noted that Canada should be asking of this latest potential purchase:

Robertson then suggested, “I am not sure it would pass these tests, especially the last one”.

While gold is not currently considered a strategic resource mineral requiring regulation, some experts are saying it should be added to the list

Quoted in the Globe and Mail, Canada’s former director of the Canadian Security Intelligence service, Richard Fadden, noted that China was quietly acquiring assets just below the threshold for regulatory intervention. “There was a worry that the Chinese seemed to be very knowledgeable about regulatory thresholds and were coming just underneath them and, as is well known, Chinese corporations abroad are required to comply with Chinese government directives. If you had enough of these, either beneath regulatory thresholds or small investments, they would eventually be consolidated and there would not be very much anyone could do about it”.

Beyond strategic resources-military and sovereignty concerns

China has been proclaiming itself to be a ‘near Arctic country” with implications as to rights in the polar region. Such a claim was made in the Chinese supported Global Times news outlet in December 2019 when it said in a headline that the U.S was ‘trying to obstruct Chinese rights in the Arctic”

Along with that statement, there are concerns about military and sovereignty issues.

Rob Huebert, senior research fellow with the Centre for Military and Strategic Studies at the University of Calgary, has noted the potential military implications of a presence in the Arctic suggesting that the new Arctic capable icebreaker Xuelong and others could be used for map submarine routes. He also suggested that it would be easy for China to hide the fact they are creating Arctic capable submarines. 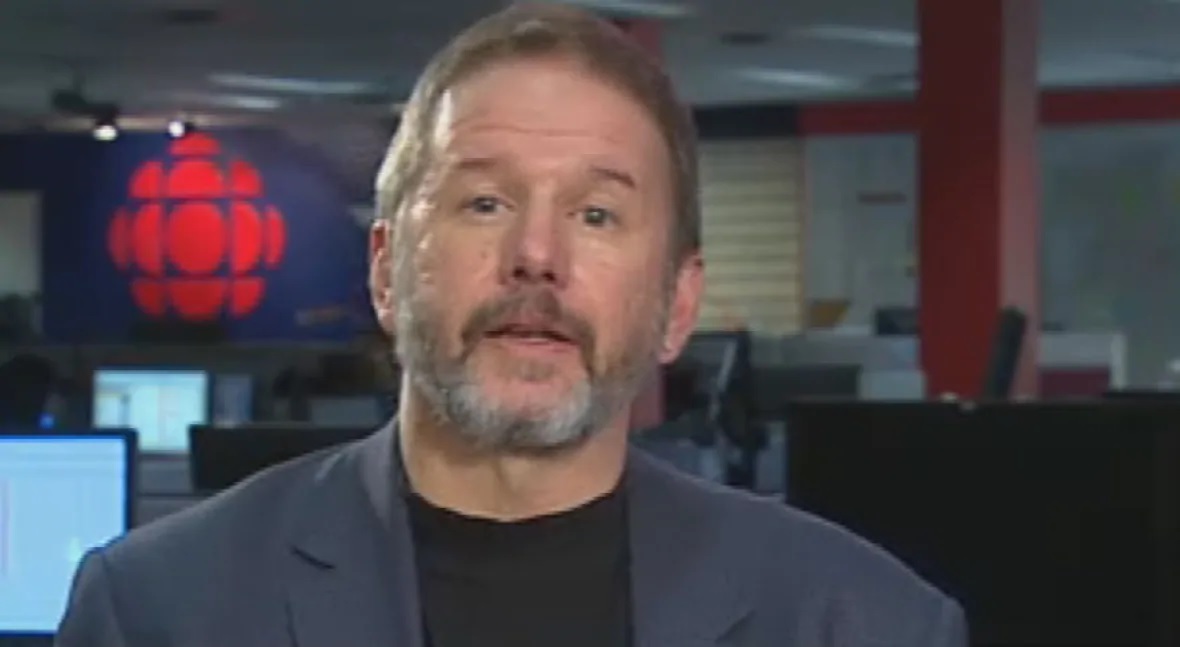 Rob Huebert, associate director of the Centre for Military and Strategic Studies at the University of Calgary says in the short term the deal may look good for Canada, but long term it could prove problematic. (CBC)

In an email to RCI he noted that the intended purchase was carefully selected as a project that would face limited opposition in that gold “is a non strategic resource in a region that is suffering from both the impacts of the COVID pandemic and a set of federal government policies that have discouraged resource projects and would provide much needed employment in the region”. Huebert says while in the short term in looks like a positive for Canada, the longer term is more problematic

Huebert writes, “The Chinese are currently also embarking on their Silk Road initiative by which they hope to expand Chinese control over a world-wide network of maritime trading locations. History has shown that this is how maritime powers such the UK and US have been able to establish themselves as world powers. In the long term, Canadian officials will need to watch if the Gold Mine leads to new infrastructure that leads to a port that will then be serviced by Chinese commercial traffic. This is where it then become complicated for Canada. How would you say no then? If the mine and new infrastructure have come to provide for prosperity for the region, what Canadian Government would be willing to put on restrictions?  And what would the requirements of Chinese vessels coming to service the region and to carry out production be? What would Canada then need to do to maintain Canadian Arctic Sovereignty over the NWP?  These are over the horizon issues that need to be thought of now”.

Margaret McCuaig-Johnston is a senior fellow at the University of Ottawa, a long time advisor to government on science and technology, and member of the China Canada Joint Committee on S&T.

In an email to RCI she wrote “ China has indicated in documents such as its Arctic Policy (Jan 2018) that it sees resource exploration and exploitation throughout the Arctic (not just the Cdn Arctic) as its right under international law.  (Keep in mind that China is not an Arctic nation.)  It has given priority to deals like this one in order to establish its geopolitical presence in the Arctic”.

The sovereignty issue was also emphasised in an additional comment , “This growing interest by China in the Arctic poses a challenge for Canada in protecting its jurisdiction over the Northwest Passage.  To date, Chinese ships going through the Passage have asked permission.  However, we’ve seen elsewhere such as the South China Sea and Hong Kong that China ignores international law when it is in its interest to do so.  Indeed, sending ships through without asking permission would reinforce China’s insistence on open navigation in other straits with jurisdictional claims such as Hormuz and Malacca.  The Canadian Government will need to be prepared for the day that China starts to send its ships through without permission”. 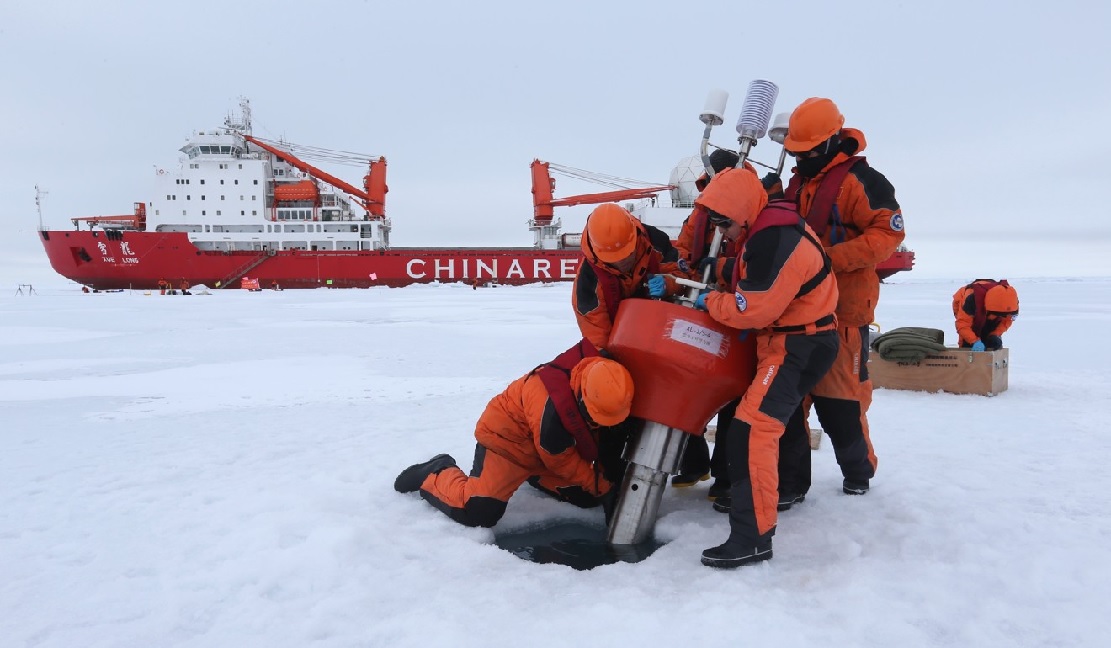 Members of a Chinese research team set up an ocean-profiling float at a short-term data acquisition location near China’s icebreaker Xuelong, or “Snow Dragon”, in the Arctic Ocean in August 2016. China has declared itself a “near Arctic country”  Photo: Xinhua

The Washington-based Jamestown Foundation policy think tank has indicated that China has clear plans to incorporate Arctic ambitions into its naval strategy. Chinese ships and icebreakers could be used to this end to survey submarine routes and critical acoustic studies needed for submarine operation and perhaps perform other military services while transporting ore and materiel to the Arctic site.

Citing  statements not intended for foreign consumption, the Foundation notes that Chinese naval policy now includes “expansion into the two poles”.  while another document cites the need for Chinese submarines to operate in all oceans including the Arctic.

The Foundation also quotes from another 2018 document from China’s  National Defence University stating, “As the world becomes hotter, the Arctic passages will increasingly become important areas for the operations of China’s maritime forces. Once [Chinese] forces normalize their presence in this region, they will not only be able to effectively pin down great powers like the U.S. and Russia; they will greatly reduce pressure from primary opponents in our other strategic directions”.

Protecting Chinese interests in the Arctic could mean demanding access to mineral resources but also to fish and other marine stocks. How an additional military presence might affect such activities cannot be known.

Many experts are advising against approval of the deal which is among the first to be examined since the federal government announced increased scrutiny for foreign acquisitions as the economic downturn from COVID-19 has driven down the value of Canadian companies.

The review under the Canada Investment Act will examine if the deal represents a net benefit to Canada, This would be in terms of revenue, and affect on indigenous communities, and jobs, along with a further possible investigation if there is a finding that the deal may represent potential harm to national security.