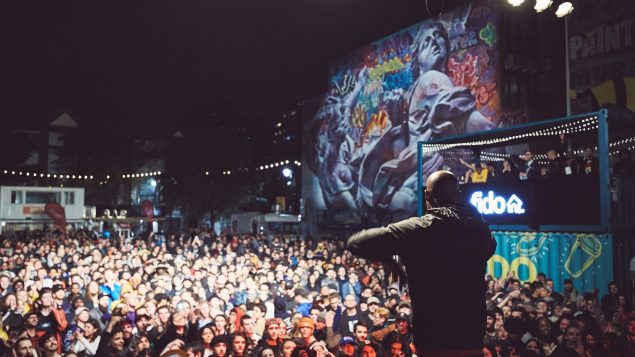 Despite the rain, the audience came in great numbers to hear the American rapper Freddie Gibbs at Montreal MURAL Festival on June, 15, 2019, with a mural of Spanish artists Pichiavo in the background. To avoid crowds or gatherings, the 2020 MURAL Estival organized online music presentations. (Photo Credits: Darwin Doleyres)

In a city where festivals are almost as numerous as churchtowers, a summer event that cannot go unnoticed is Montreal MURAL Festival. Usually happening over a dozen days in mid-June with a flurry of visual art, installations and music acts taking over the St-Laurent Bvd, the international street art celebration has reinvented itself this year with an extended edition called MURAL Estival – a bilingual pun on “summertime” in French. Running from June until September, this has been a feast – albeit digital – for the eyes and the ears.

Like previous years, MURAL Estival has been quietly transforming “the Main” – this is the way Montrealers call the St. Laurent Bvd -, but it has also expanded its reach as new artwork has also sprouted on the walls and on the pavement of other neighbourhoods.

In the Entertainment District, a ‘tricot-graffiti’ (yarn bombing) entitled “Tricotés serrés” was painted on the median strip between the road and the bike path, while in Côte-des-Neiges, a mural on the Jewish General Hospital was painted as an homage to the health workers who have been working so hard during the COVID-19 pandemic.

Except for two Ontarian artists, this edition focuses on local artists, and includes more digital events. Two murals have been created in July, respectively “Instinct” by digital visual artist Fvckrender and “Jardin secret” by French muralist Ankhone. Five more murals are in the works and should be ready for passersby to enjoy by the end of August. Check out the festival’s dynamic map showing all the murals created since the first edition in 2013. 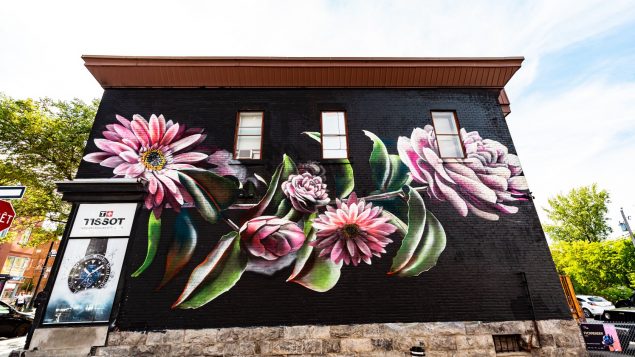 The mural “Instinct” was designed by visual artist Frédéric Duquette, a.k.a. Fvckrender, whose work went from digital to physical for his participation at MURAL Estival. The work was painted by Jeremy Shantz, a polyvalent artist from British Columbia now living in Montreal. (Photo Credits: JF Galipeau)

The 2020 Mural Estival edition has kept a low profile in June and July, but with the gradual lifting of the shutdown and the closure of the St-Laurent Bvd to traffic for 10 days starting August 13, it has regained its territory. For instance, Montreal native Francorama (aka Franco Égalité) has designed and painted “Together apart with street art”, an immersive terrasse that has been providing a safe space to sit and have a drink while respecting physical distancing measures.

MURAL Festival started just like that in 2013: “the Main” was closed to cars during the summer season, which literally opened new avenues for artistic expression. Hip hop, rap and electronic music were quickly added to the programming, which gradually included more francophone musicians as the hip hop scene was maturing in Quebec.

“The festival’s headquarters initially was in a parking lot on St. Laurent, between Sherbrooke and Prince-Arthur. We rented it to produce murals around, and we set up a tent in the center with a DJ kit, and we were lucky enough to have Kaytranada as he was just starting his career.”Pierre-Alain Benoît, General Director, MURAL festival

“Last year, the francophone scene exploded, and we diversified our music presentations with more Quebec DJS and bands like Alaclair Ensemble, Dead Obies or Milk & Bone. The two crowds – anglophone and francophone – are getting more mixed nowadays,” Benoît said.

Of course, the usual music presentations produced by MURAL, where thousands of Montrealers and tourists used to spend the night in the street, are not happening this year. Event organizers had to find new ways to produce their cultural happenings and stay alive despite the shutdown, and that’s when social media became instrumental.

Luckily, MURAL could take advantage of its international reputation. “About 65% of our Instagram followers are watching from abroad,” says Benoît. “In the physical world we already had ‘art battles” with visual artists painting live during a music presentation, but this was not easy to do online,” he added.

“The concept that has been most popular among our international viewers is a visual animation performed by artists on the live images of a music show, like an online VJ session broadcast with a new app called Tagtool.” Pierre-Alain Benoît 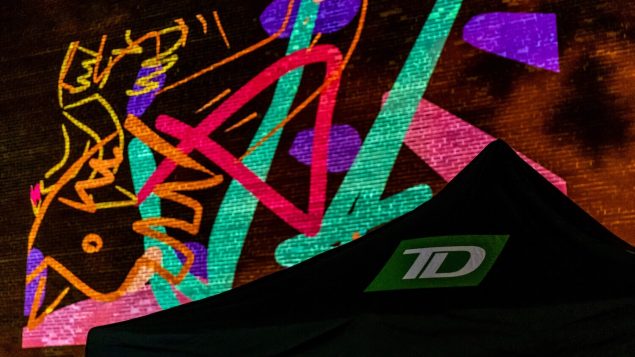 In 2019, the MURAL Festival organized “Tagtool Party”, a workshop where people were invited to express their creativity using an app that allowed them to paint with light or make animated graffiti with an iPad. (Photo Credits: JF Galipeau)

An Instagram functionality allowing two different video feeds to be broadcast at the same time on screen also came in handy for MURAL. During the weekly Split Sessions broadcast each Thursday at 6:00pm, viewers can enjoy free live music shows/artistic happenings on MURAL Estival’s Instagram.

For instance, on August 6, actress and singer Claudia Bouvette was singing in English and French on the bottom part of the screen while on the top half, pop artist Antoine Tava was painting a pair of initially white Stan Smith tennis shoes.

Another great session was this past Thursday, August 20, when the festive band Clay and Friends shared their Instagram presentation with Miss Cloudy, an expert in the art of paper folding. Watching her turn unidimensional sheets of paper into a 3D artwork is a unique way to discover the creative process of a designer that has collaborated with cultural institutions such as the Montreal Museum of Fine Arts, the Montreal Symphony Orchestra, or les Grands Ballets Canadiens.

Meanwhile, Mike Clay and his friends were bringing their joie de vivre to fans watching from Canada and Europe, where the band performed innumerous shows last year after releasing the album La Musica Popular de Verdun.

During last year’s tour, Clay and Friends often opened for Quebec new star Les Louanges. Although you’d expect to hear a band, behind the plural name – meaning The Praises in French – is one young man who was baptized as Vincent Roberge.

This is the continuation of an extremely successful period for Roberge. Following the 2018 release of his first album La nuit est une panthère, he immediately snatched three Felix Awards – the most important in Quebec’s music industry – and was also praised in English Canada, winning the 2020 JUNO Award for the Francophone Album of the Year last June.

Unlike Clay and Friends, Les Louanges is not singing in an indoor venue this Saturday, but rather on the rooftop of the PHI Centre, in Old Montreal. This art gallery, known for its involvement in contemporary art and virtual reality, was founded in 2012, like the MURAL Festival. Both cultural institutions have been collaborating on various projects throughout the years, and this August 22nd rooftop show is designed to be an event marking a resurgence of activity in troubled times.

Sonication features live shows recorded on the rooftop of the historic building and broadcast in real time on screens throughout the PHI Centre, and then shown as a web series each Wednesday on PHI’s Facebook page.

Apart from Les Louanges, Desjardins said she also selected the Montreal band Random Recipe, who played at the PHI Centre in the first years of its existence and went on touring the world. “This is the kind of artists that are fit for both audiences, the one that frequents the PHI Centre and the MURAL festival-goers,” she said.

Although the PHI Centre’s music stage and top notch studio were designed by sound engineers and acousticians, the place is mostly known for its art gallery, says Renelle Desjardins, who sees this collaboration with MURAL Estival as a way to boost its international reputation.

At the crossroads of art and technology

This shutdown has forced event programmers out of their comfort zone, and in a way, this is for the better. The audience gets to discover new artists, such as Montreal DJ and producer Hologramme (aka Clément Leduc) whose minimalistic electronic productions evoke cinematic images. He will be playing live on August 27’s MURAL Estival’s Split Sessions, along with visual artist Josiane Lanthier.