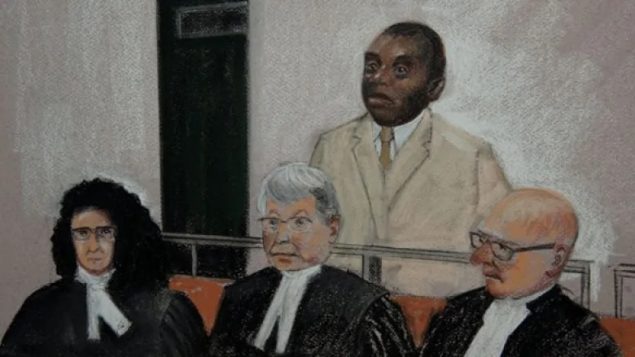 Désiré Munyaneza is shown in a sketch from a federal court appearance in 2013. A Rwandan immigrant living in Toronto, Munyaneza was convicted of war crimes during the 1994 genocide in Rwanda. He is just one of two people ever charged under Canada's Crimes Against Humanity and War Crimes Program. Amnesty International Canada says more must be done to bring suspected war criminals to justice in Canada. (THE CANADIAN PRESS/Mike Mclaughlin)

The law enshrines universal jurisdiction for genocide, crimes against humanity and war crimes, meaning these offences are considered criminal acts in Canada even when they are committed abroad.

But only two people have been prosecuted under the legislation, according to the report.

Both were linked to the 1994 genocide in Rwanda. 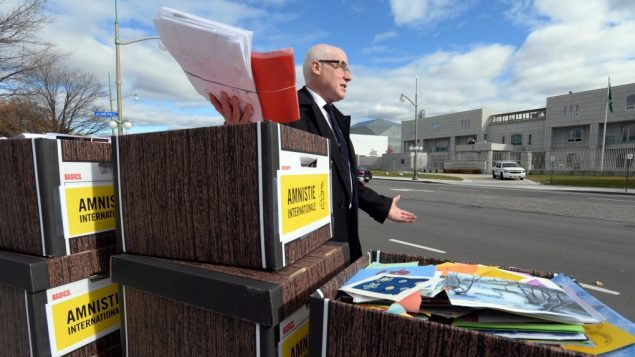 Alex Neve, Secretary General of Amnesty International Canada, holds up some of the 31,000 letters as they call on Saudi Arabia to free Raif Badawi as protesters take part in a rally outside the Embassy of Saudi Arabia in Ottawa on November 2, 2015. (THE CANADIAN PRESS/Sean Kilpatrick)

The report says the $15.6-million budget for the war-crimes program has remained static over the years, but the costs of conducting investigations “have risen significantly.”

“More often than not, Canada washes its hands of the responsibility to adequately prosecute alleged war criminals, failing to take any action or opting to deport them without any guarantees they will be investigated for their crimes or be protected from serious human rights violations themselves,” says Alex Neve, secretary general of Amnesty International Canada.

“Longstanding failure to sufficiently resource efforts to bring persons suspected of responsibility for crimes under international law and human rights violators to justice in Canada through universal jurisdiction means that Canada risks impunity for those accused of the worst possible crimes in the world. 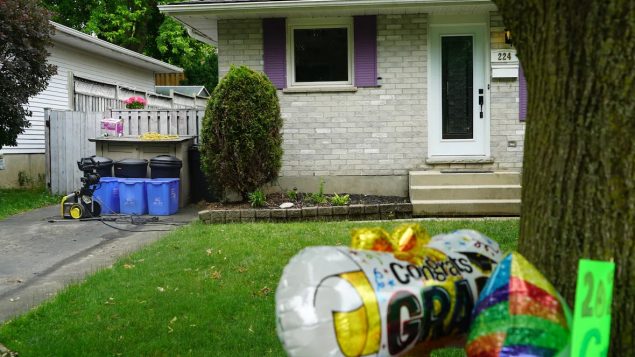 Neighbours said Bill Horace was found sprawled in front of this house in June when first responders arrived after he was fatally shot by four masked men. (Colin Butler/CBC News)

“Canada must do everything to ensure that such individuals face justice, rather than evade justice, in Canada.”

The Amnesty report cites the case of Bill Horace as an example of Canada’s poor record since it passed the legislation.

Horace had been widely accused of committing mass murder, rape and torture in Liberia during the 1990s. 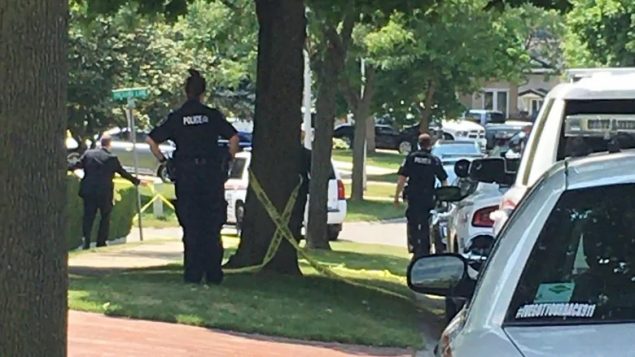 “Despite a mountain of evidence against him, Canadian officials never charged Horace, allowing him to live freely in this country since he first arrived in 2002, Amnesty Canada says in its report.

He was shot dead in London, Ontario in June. 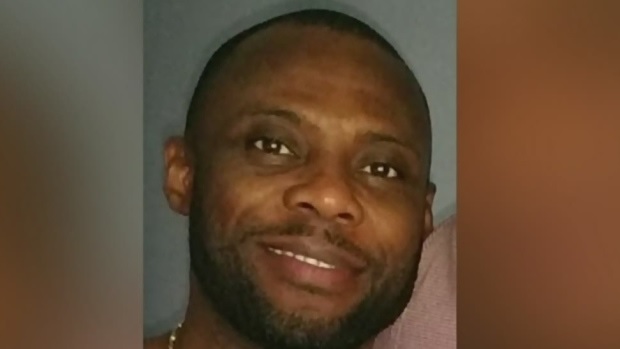 This photograph was published in Front Page Africa, a daily newspaper based in Monrovia, linking Bill Horace to war crimes in a bloody civil war that raged in Liberia from 1989 to 1996. (Front Page Africa)

The Canadian Press reports that today’s report was co-ordinated by Sebastien Jodoin, Canada Research Chair in Human Rights and the Environment at McGill University, and developed with the input of lawyers, legal scholars, and law students.