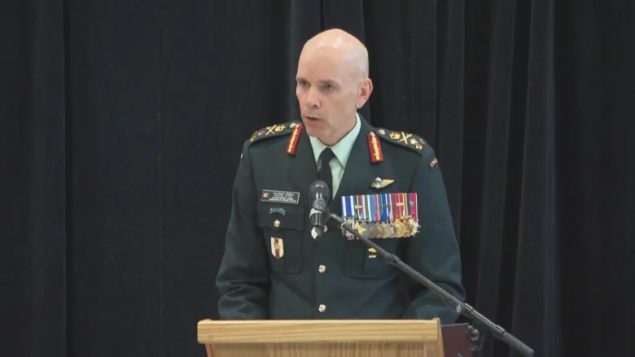 Lt.-Gen Wayne Eyre, the army's commander, says he will give individual army units across the country "explicit direction" on how to deal with soldiers suspected of hateful conduct and extremism. (CBC News)

Canada’s army commander is taking aim at far-right infiltration of the country’s military.

Lt.-Gen. Wayne Eyre says he plans to issue a special order that will give individual army units across the country “explicit direction” on how to deal with soldiers suspected of hateful conduct and extremism.

He also says he will reinforce the message personally by convening a meeting of all commanding officers and regimental sergeant majors — 450 mid-level leaders — to discuss the problem. 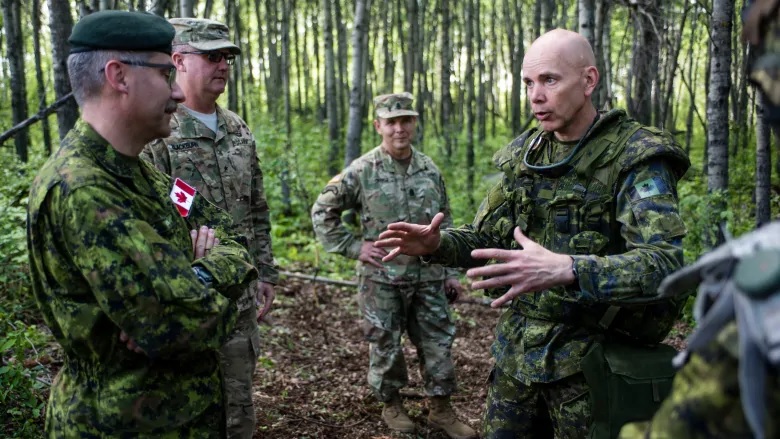 Lt.-Gen. Wayne Eyre, who was a brigadier general when this photo was taken, speaks with Lt.-Gen. Paul Wynnyk during a training exercise in 2016. “We expect our individuals, whether they be full-timers or part-timers, to embrace the values of our organization,” Eyre has said. (DND Combat Camera/Master Corporal Malcolm Byers)

Eyre, who assumed the post last month, made the comments in an interview with CBC News’ military expert Murray Brewster.

Eyre told Brewster the upcoming order will “lay out my expectations for actions that need to be taken, the proactive actions, the decisiveness that we have to deal with these cases.

“There is absolutely no place in the Canadian Army for those who hold hateful beliefs and express these beliefs through hateful behaviour. If you have those types of beliefs — get out. We don’t want you. You bring discredit and dishonour upon our organization.”

Eyre’s directive follows a CBC News investigation of a Canadian Ranger unit uncovered how Erik Myggland, a British Columbia reservist who openly supported two far-right groups, was allowed to continue serving even after he had been identified by military counterintelligence and interviewed as a potential threat. 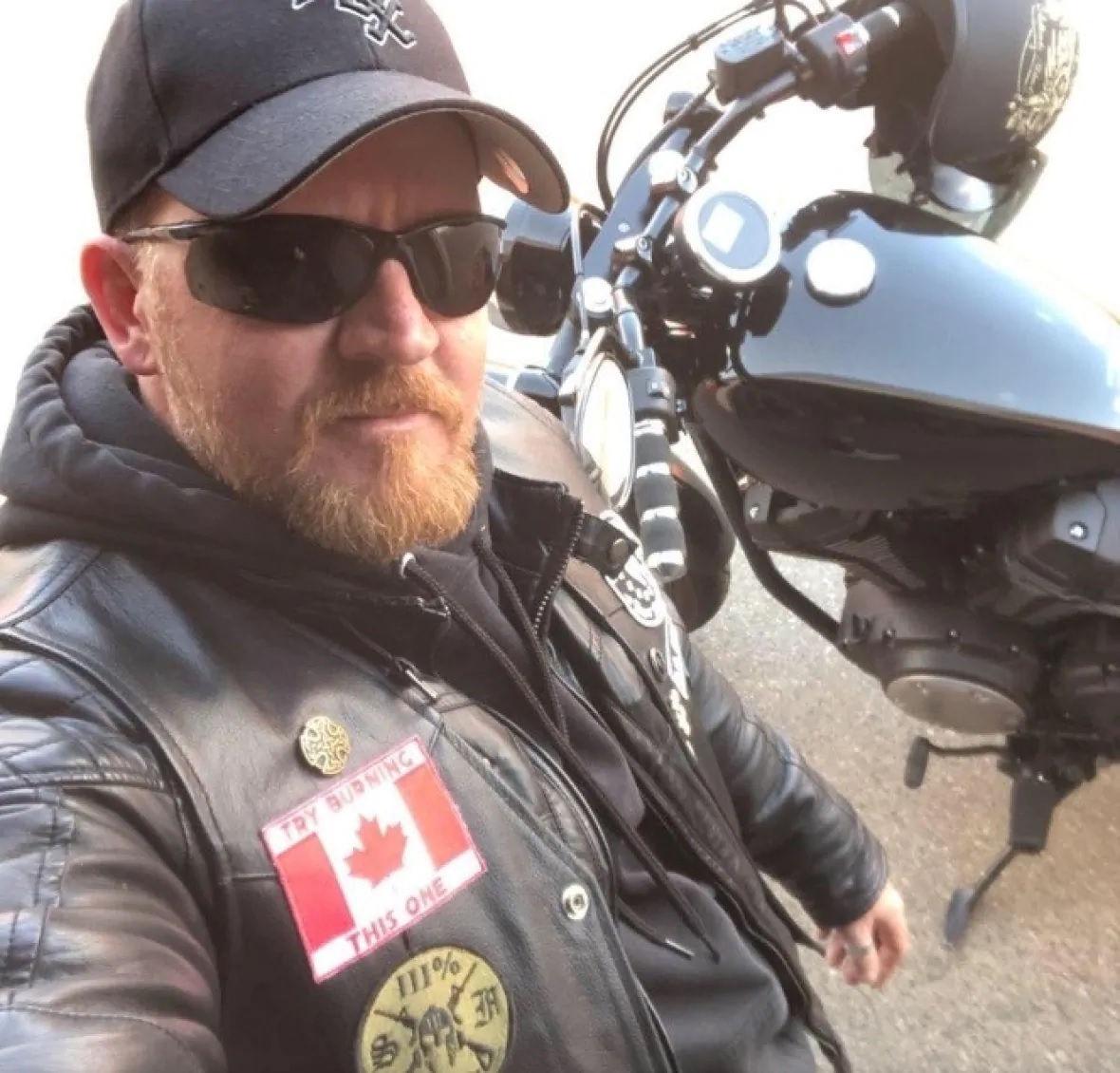 A Facebook photo of Erik Myggland on Aug. 24, 2019 wearing a Three Percenter patch–originally a U.S.-based movement built around gun ownership rights and survivalist training.ining. The group claims not to be racist or to be associated with white supremacist organizations. (Facebook/CBC News)

Eyre said last week Myggland should be formally out of the service “within weeks” after the service struggled for a year to release him.

Eyre’s directive also comes as prosecutors in the U.S. pursue firearms charges against former Canadian army reservist Patrik Mathews, who is accused of recruiting for a white-supremacist organization in the States.

Jaime Kirzner-Roberts, the director of The Friends of Simon Wiesenthal Center’s campaign against anti-Semitism, told Brewster she would like to know if the navy and the air force plan to issue to similar directives.

“This is the first time that we have seen some real positive momentum with respect to addressing the issue of extremist and white supremacist activity in the military,” she said. 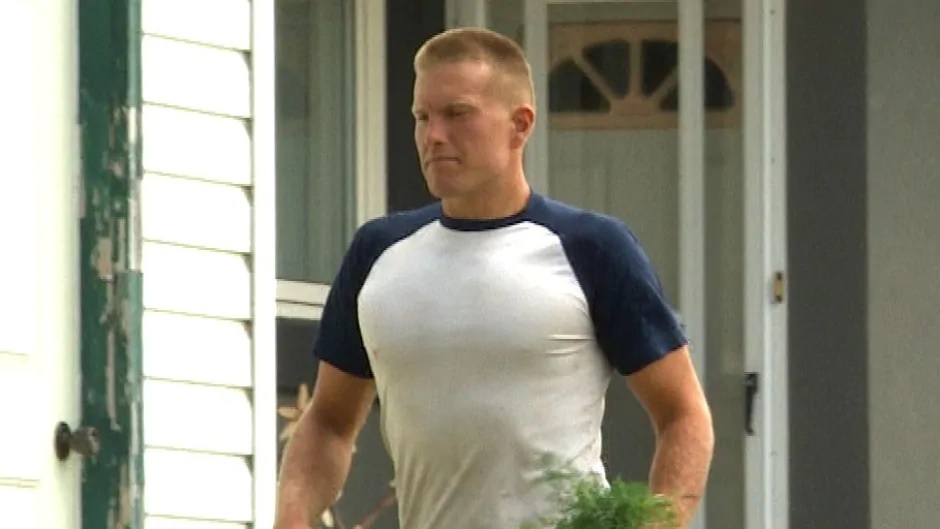 Former army reservist Patrik Mathews, an alleged recruiter for the neo-Nazi group The Base, is shown in front of his home in Beausejour, Man., in August, 2019. (Gary Solilak/CBC)

“We’re heartened to see this momentum, this process of momentum beginning with respect to the Army, and we are hopeful that this momentum will continue in the Navy and in the Air Force and other and other places within our Armed Forces.”

Defence Minister Harjit Sajjan has assured the organization that he is formulating a plan to systematically address hateful conduct and racism.

In July, the Canadian Armed Forces said it was implementing a new system to help monitor and track any suspected incidents of hateful conduct within its ranks, calling on a network of researchers to help military investigators.