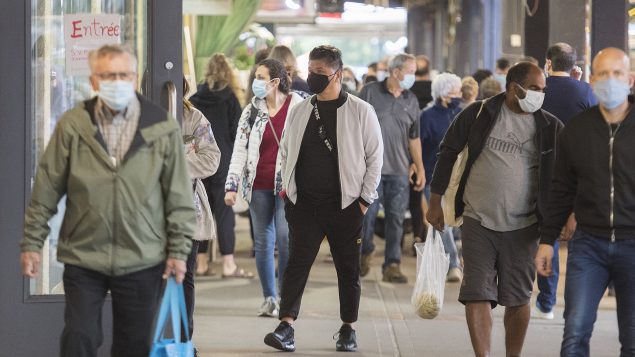 People wear face masks as they walk through a market Sunday in Montreal. As survey published today found that about 57 per cent of respondents said that they had eased their adherence to one or more of COVID-19 public health safety measures over the last month. (THE CANADIAN PRESS/Graham Hughes)

Over half of Canadians letting up on COVID safety measures: poll

Despite recent stepped-up warnings from the prime minister and the country’s chief medical officer about not letting up in the fight to contain COVID-19, a new public opinion poll suggests that almost a quarter of Canadians believe warnings from public officials and medical experts are overblown.

The Léger and the Association for Canadian Studies survey published today also found that about 57 per cent of respondents said that they had eased their adherence to one or more of public health safety measures over the last month.

The survey found that proper physical distancing was the most likely precaution to be relaxed (37%), followed by wearing a mask outside the home (33%) and not gathering in large groups (31%). 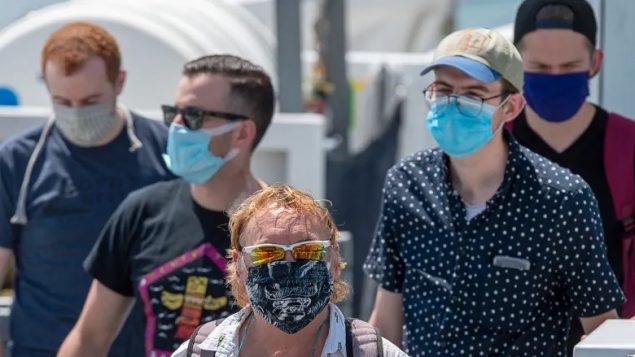 Health officials recommend that Canadians wear a mask and social distance in public, but not everyone agrees. (Andrew Vaughan/The Canadian Press)

“There is a link. If you believe we’re exaggerating the disease, you’re more likely to have relaxed on your strict observance of the rules in place,” says Léger executive vice-president Christian Bourque

The survey found younger respondents were more likely than those over 55 to believe statements were being exaggerated.

Respondents aged 18 to 34 were the most likely to have relaxed on how closely they followed measures, with nearly three-quarters of them saying they had done so in the past month.

Regionally, respondents in Alberta were more likely to believe the threat was embellished, followed by Atlantic Canada and Quebec, with Ontario at the bottom.

The survey also found an uptick (45%) in the percentage of respondents who believed the worst of the crisis is yet to come — the highest level it has been since April 13.

Nearly two-thirds of respondents believed the country is heading back to some form of lockdown, similar to what happened in March and April.

“We’re now at this pivotal moment where people feel we need to go back to how we used to be, where basically Canadians were exemplary in terms of following the safety measures put in place,” Bourque said. 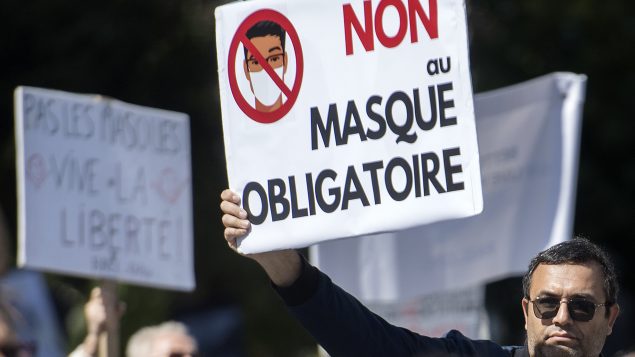 A new poll suggusts that resistance is growing to public-health safety measures to combat COVID. On Saturday, thousands demonstrated in Montreal against new provincial mandatory indoor mask rules that bring fines if they are ignored. (THE CANADIAN PRESS/Graham Hughes)

On the weekend, thousands demonstrated in Montreal against the toughening of provincial mandatory mask laws and Ontario Premier Doug  Ford warned on Monday that parts of Ontario could see another lockdown if the province cannot get a handle on increasing rates of the virus.

A poll last month by the non-profit Angus Reid Institute suggested that about 18 per cent of the Canadian public didn’t like the way health officials and political leaders have handled the pandemic and has expanded social interactions and ignored advice on physical distancing, hand washing and mask wearing.

The Léger online poll was conducted Sept. 11 to 13 and surveyed 1,539 adult Canadians.

It cannot be assigned a margin of error because Internet-based polls are not considered random samples.

With files from The Canadian Press (Jordan Press)