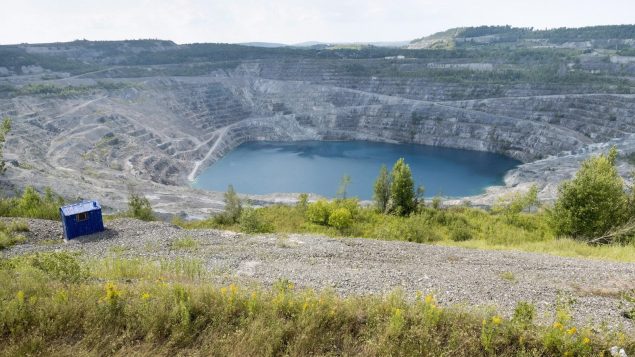 The open pit of the now closed Jeffrey mine is seen Wednesday, August 10, 2016 in Asbestos, Quebec. (Paul Chiasson/The Canadian Press)

The Quebec town of Asbestos set to change name next month

The citizens of Asbestos, Québec, will vote on the new name of the town in October.

According to an announcement made by Asbestos Mayor Hugues Grimard at a city council meeting on Monday night, the four options for a new name are Apalone, Jeffrey, Phénix and Trois-Lacs.

Asbestos was a mineral that was widely used for insulating buildings, and the town’s Jeffrey mine, which closed in 2012, was once one of the largest sources of the mineral.

However mining and using asbestos is banned in many places due to the fact that inhaling asbestos fibers can be deadly by causing many types of cancer.

Due to the negative perception of the mineral, the town of Asbestos decided to go through a process to change the name of their town in Nov. 2019.

“We have lost businesses that don’t want to establish themselves here because of the name,” Asbestos Mayor Hugues Grimard told CBC News in November.

After starting the name change process, which is set to cost the town about $100,000, citizens will finally be able to have their say on what the new name of the town is going to be when they vote next month.

Grimard said that the COVID-19 pandemic altered the planned timeline, but with strict health measures in place, the town is inviting the population to make their voices be heard.

“We are at the last stage of the consultative process with the population and can’t wait to hear from them,” Grimard said. “I am very happy with the approach we have adopted for this whole process and especially the involvement of our population. We invite our citizens to vote in big numbers.”

According to the press release from the town, any citizen aged 14 and up has the ability vote from Oct. 14 to 18.

With files from CBC News and Isaac Olson