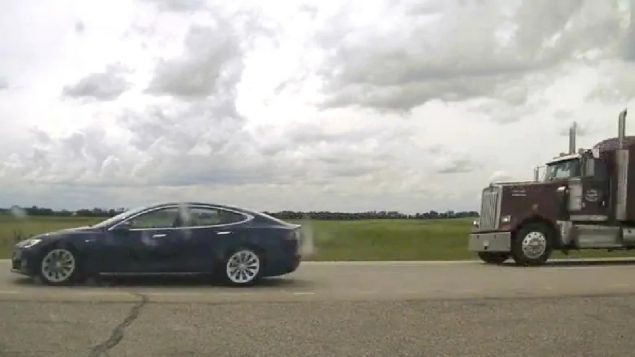 Photo of the 'driverless' Tesla as it sped past police. The 20-year-old B.C. driver of this Tesla Model S has been charged with speeding and dangerous driving, a criminal offence. The incident occurred on July 9 on Highway 2 near Ponoka, about 100 kilometres south of Edmonton. (Alberta RCMP)

Asleep at the (semi-autonomous) wheel at 150km/h

A 20-year-old driver has been charged with speeding and the criminal offence of dangerous driving following an incident in July.

Police in Alberta say it’s the first they’ve ever seen.

The Royal Canadian Mounted Police say they received a report of a speeding car on the highway near Ponoka about a 100km south of Edmonton and 200km north of Calgary,

The Tesla Model S then sped past a police vehicle waiting down the highway in the median where police said the driver and passenger appeared to be in their fully reclined seats sleeping.

Tesla’s are not fully autonomous but have a ‘level 2’ autopilot meaning they can drive autonomously but do require the driver to be alert with hands on the wheel and ready to act.

Not really autonomous, the Model S has ‘auto steer’ and ‘traffic aware’ functions in its cruise control, both of which appeared to have been activated.

When a police car began following behind the Tesla model S, they registered it at 140 km/h but when they began flashing its lights, the car sped up to 150 km/h presumably because other vehicles pulled out of the way and the car ‘sensed’ a clear road ahead. Allowed speed is 110 km/h on divided highways in the province.

It was only when the police put the siren on that the occupants rose up and took control to pull over.

The British Columbia driver was initially charged with speeding, but after consultation with legal officials, the charge of dangerous driving has been added.

The autopilot functions in the Tesla require input from the driver’s hands on the wheel. If it senses no hands on the wheel, an alarm goes off after 15 seconds and gets louder the longer no hands or wheel movement is detected. With no input the vehicle will automatically slow down and pull over.

However, there are many videos online with instructions on how to override the safety features.

There have been no accidents in Canada with so-called ‘self-driving’ vehicles, but there have been a few in the U.S, and at least three deaths.

In January near Burlington in southern Ontario, the provincial police charged a Tesla driver with careless driving after he was caught on ‘autopilot’ driving at 135km/h while using both hands to floss his teeth.

Last year in Richmond, British Columbia, people were taken aback to see a Tesla slowly navigating its way through a crowded parking lot with no driver and at one point driving in the wrong lane. As part of Tesla’s ‘enhanced Autopilot’ package, the cars have a ‘smart summon’ feature which can tell the car to come to your location. There have been a few cases of near collisions in U.S parking lots.

Legal experts say such incidents are only going to become more common as ‘autonomous’ or semi-autonomous vehicles become more popular. Because the technology is new, they say there is a legal grey zone in many situations about who would be responsible for accidents, and that insurance may not cover a vehicle owner if no-one is behind the wheel.