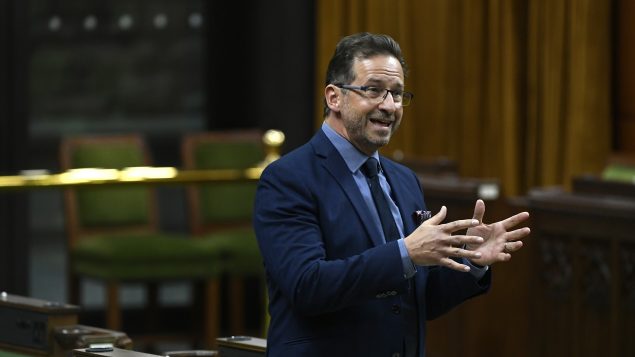 Bloc Quebecois Leader Yves-Francois Blanchet rises during a meeting of the Special Committee on the COVID-19 Pandemic in the House of Commons on Parliament Hill in Ottawa, on Tuesday, June 9, 2020. Blanchet has been diagnosed with COVID-19, his party said Friday, Sept. 18, 2020. (Justin Tang/THE CANADIAN PRESS)

Bloc Quebecois leader Yves-Francois Blanchet has been diagnosed with COVID-19, the federal party which works to achieve Quebec’s separation from Canada has confirmed.

The 55-year-old leader of the third largest party in the House of Commons is doing “perfectly well” and will remain in isolation at his residence in Shawinigan, Quebec, until Sept. 26 in accordance with instructions from the Quebec Public Health Department, the party said in a statement.

Blanchet’s wife, Nancy Deziel, announced in a tweet on Tuesday that she is in self-isolation after testing positive for the coronavirus.

The entire Bloc Quebecois caucus, including Blanchet, has been in self-isolation since a staff member tested positive on Monday.

Blanchet is the first federal leader to test positive for the coronavirus.

Prime Minister Justin Trudeau placed himself in self-isolation after his wife, Sophie Gregoire Trudeau, tested positive for COVID-19 in mid-March.

At the time, Trudeau, who had no symptoms, did not get tested for the virus.