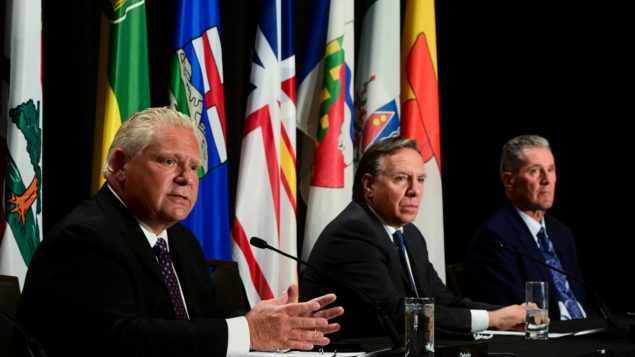 Premiers seek $28B in additional health transfers from Ottawa

Four of Canada’s conservative-leaning premiers are calling on the federal government to increase health funding to the provinces by $28 billion as provincial budgets are getting a double whammy hit of rising healthcare costs and dwindling revenues due to the COVID-19 pandemic.

The boost in health funding to the provinces, which under the Canadian constitution have the primary responsibility of delivering healthcare, would bring annual transfers from the federal government to $70 billion.

Speaking at a joint press conference in Ottawa on Friday, Ontario Premier Doug Ford, Quebec Premier Francois Legault, Manitoba Premier Brian Pallister, and Alberta Premier Jason Kenney said they want the federal government to increase its share of health care funding from the current 22 per cent to 35 per cent.

“It’s time for the federal government to do its fair share,” Legault said.

“Nothing right now is more important to Canadians than health care because without health care we have nothing. If we don’t have our health, we don’t have an economy, and my friends, we’re here to ask the federal government, to step up to the plate,” Ford said. “As demand is increasing, the support from the federal government has been going down.”

Pallister said that the pandemic has exacerbated the problems facing the provinces when it comes to delivering healthcare to Canadians.

“Right now millions of Canadians are waiting for an appointment, for a test, for consequential treatment, for surgery. Those delays are painful. A lump that isn’t diagnosed is not fun,” Pallister said.

Alberta’s Kenney said the boost in federal funding was about “fiscal fairness,” not politics.

“Canada has to be there for Alberta and for other provinces that are facing the greatest economic and fiscal challenge since the Depression,” Kenney said.

The federal government is providing $19 billion to the provinces to help ease the financial burden of the pandemic; about $10 billion of that sum is for health-related expenses.