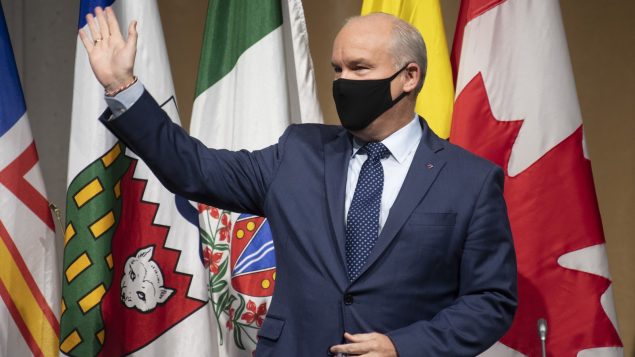 Conservative Leader Erin O'Toole waves to members of the National Caucus as he is applauded at the start of the meeting in Ottawa, Wednesday, September 9, 2020. (The Canadian Press/Adrian Wyld)

“This evening, Erin O’Toole received a positive test result for COVID-19,” the Conservative party said in a statement.

“He is very relieved that his wife and children have tested negative. O’Toole remains in self-isolation and is feeling well.”

According to the Conservative party O’Toole is “feeling well” despite the positive test.

O’Toole had been in isolation since Sept. 16 after a staff member that he had been travelling with tested positive for the virus.

He and his family then got tested on Thursday in Gatineau, a city in Western Québec.

In response to O’Toole’s positive test, Québec Premier Fraçois Legault tweeted that he would get tested as a precautionary, and self isolate at home. O’Toole had met with Legault last week to discuss the priorities of Quebecers.

Bloc Québecois leader Yves François Blanchet and his wife, Nancy Déziel, also tested positive for COVID-19 last week, and will remain in isolation in their home.