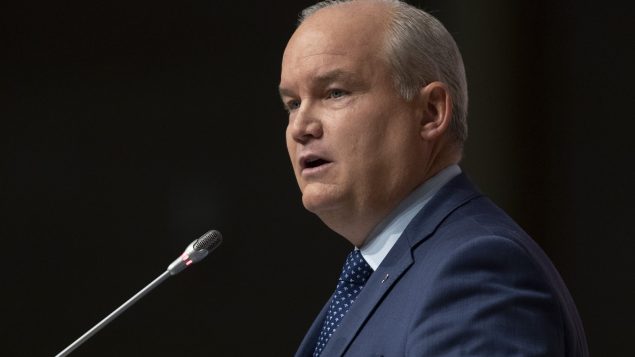 Conservative Leader and Leader of the Opposition Erin O'Toole speaks to members of the National Caucus in Ottawa, Wednesday September 9, 2020. O’Toole and his family are being tested for COVID-19. (The Canadian Press/Adrian Wyld)

Conservative Leader Erin O’Toole and his family are being tested for COVID-19 after a staff member that had been travelling with O’Toole tested positive for the virus.

A statement from the Conservative Party said that while O’Toole has not shown any symptoms, he and his family are being tested out of an abundance of caution.

Other staff that were traveling with O’Toole are also being tested and will be isolating as well.

The statement added that O’Toole’s office is contacting everyone he has recently met with.

“My family and I are feeling well, but we take COVID-19 very seriously. Today was going to be Jack’s first day back at school, but instead we will be getting tested and self-isolating per public health guidelines. The health and safety of my family and all Canadians is my top priority.”Erin O’Toole, leader of Canada's Conservative Party

O’Toole had just met with Québec Premier Fraçois Legault on Monday for his first in person meeting with a premier since winning the Conservative leadership race.

In a Twitter thread on Wednesday, Legault said that he contacted public health authorities and because O’Toole did not show any symptoms, there is a low risk of exposure. Legault added that public health did not recommend isolation or screening and to only monitor for symptoms.