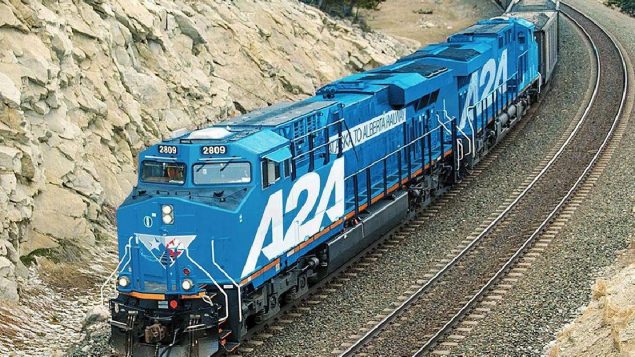 A huge rail project between the Alaska Railroad Company (ARRC) and the Canadian A2A, Alaska to Alberta Railway will receive a Presidential permit for the cross border line. Officials say if all goes well and they succeed in building their proposed project, they hope to run up to 10 trains daily between the two points. Credit A2A Railway

$22-B International railway- Alberta to Alaska, gets approval from Trump

It’s a project costing an estimated $22 Billion . The railway would stretch 2,570 kilometres from Alberta’s oil sands region to an existing junction in Delta Alaska where it connects to ports near Anchorage.

U.S President Donald Trump tweeted on Friday that he would give approval to the project that would see the line pass through Alberta,and on through Yukon to Alaska.  The U.S permit would allow the creation of a cross-border line.

The ambitious proposal would link Alberta’s oil sands to ports in Alaska, ( not shown is a proposed spur line before Delta Junction which would add the port of Valdez as an additional gateway to and from world markets.. From Fort McMurray, rail connections would be made to the rest of N America. ( A2A)

Designed mostly for cargo like oil- probably the main commodity, the line could also carry commodities like potash, ore, and container goods, with an added potential for passenger traffic.

Being called ‘A2A’, the line and U.S approval has been enthusiastically welcomed by Alberta Premier Jason Kenney. where it is seen as an alternative to controversial pipelines with the advantage of being able to ship other products to world markets in addition to oil. Also unlike pipelines, rail is a two-way route allowing imports into landlocked Alberta and would connect with other lines further south in Alberta, Canada, and the continental U.S.

Quoted by KUAC FM 89.9, A2A company vice chair Mead Treadwell said,  “The port capacity and sometimes the rail capacity at other places in Canada are just so choked that there’s a potential market for a new port and a new method to get to Asian markets,”

The U.S Presidential approval is but an early step in the process which must go through both U.S and Canadian environment reviews and approvals which in Canada would involve federal, provincial and territorial governments. In addition ‘rights-of-way’ would have to be negotiated with some landowners and various Indigenous groups. Plans are to include Indigenous groups as stakeholders in the line.

The  concept bears similarity to the American project of WWII when the U.S built the AlCan highway route which connected Dawson Creek in northern B.C to Delta Junction Alaska. The 2,700 kilometre road , initially proposed years earlier for economic benefits  was built through difficult terrain in order to be able to transport military supplies for the defence of Alaska in the case of attack from Japan. Begun in 1942 it was completed that same year spurred on by reports of Japanese attacks on the Aleutian Islands. At the time a very rough road, it is now completely paved and popular tourist route.