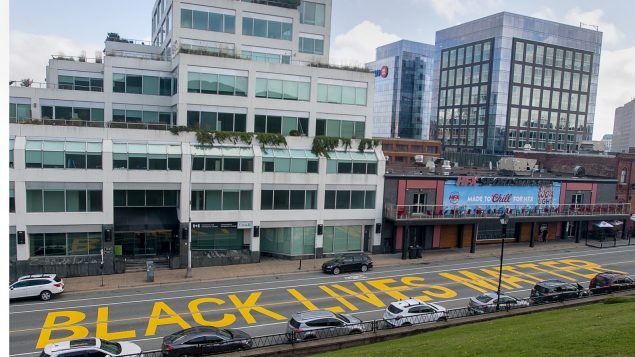 A Black Lives Matter mural, one of two painted by the city over the weekend, is seen in downtown Halifax on Tuesday, Sept. 29, 2020. Premier Stephen McNeil issued an apology to Black and Indigenous Nova Scotians for systemic racism in the province's justice system earlier in the day. (The Canadian Press/Andrew Vaughan)

Nova Scotia Premier Stephen McNeil apologized for the systemic racism in the justice system, including policing and the courts.

In a press release Tuesday, the premier acknowledged those institutions have not been just for many and apologized for the harm, trauma, and pain many Nova Scotians had to endure over generations.

“Our system of justice has failed members of our Black and Indigenous communities. This system is supposed to keep all Nova Scotians safe, but because of the colour of your skin, many of you live in fear. Today, I say: enough,” McNeil said in a statement. “I see you, I hear you, I believe you and I am sorry. On behalf of my ministers, my caucus, our government, we are sorry racist institutions have failed you, your families and your ancestors.”

“I can’t take away your pain or bring back the opportunities and lives lost. But I am showing up today to try to work with all of you to find a new approach to public safety,” he added.

The #BlackLivesMatter movement has brought to the forefront the systemic failures of our current reliance on policing and law enforcement and the mistreatment of our Black and Indigenous communities and the most vulnerable and marginalized. It’s time for fundamental change.

McNeil also committed to a restorative process to transform the approach to public safety within the province, and announced a design team to begin the process.

The design team is co-facilitated by Jacob MacIsaac and Jennifer Llewellyn and its members represent academic, government, and those who work in and come from marginalized communities.

MacIsaac said that each team has expressed a desire to make a difference and an insistence that this will not be another “review.”

“We must pay attention to the intersecting needs and ways people have been marginalized so we can bring about change,” said MacIsaac. “This is about mobilizing and creating the conditions and connections needed for action and change, and we stand on the shoulders of all the work of the past that has showed so clearly the problems and failings and the need for fundamental change.”

The design team will decide what is required to support the fundamental changes that are needed across the system and structures to ensure justice and safety for all Nova Scotians. According to the press release, the team will be carrying out its work over the next 12 to 18 months.