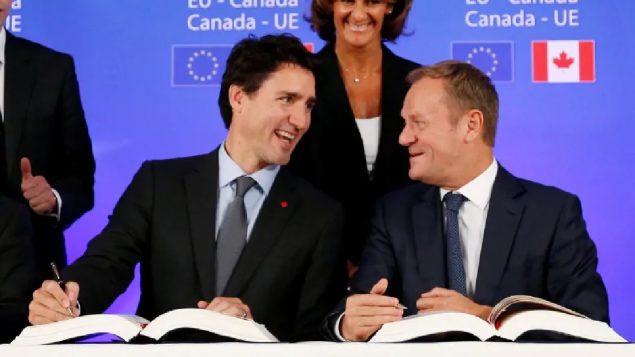 Prime Minister Justin Trudeau and European Council President Donald Tusk signed the Comprehensive Economic and Trade Agreement in Brussels in 2016. Most of its measures were provisionally applied in 2017 as the 28 member states of the EU.began to ratify the deal. Canada's agriculture sector says it hasn't lived up to expectations and blames the EU (Francois Lenoir/Reuters)

In 2017 the Comprehensive Economic Trade Agreement was negotiated and signed into force with great satisfaction by Canada’s Trudeau government to improve trade between Canada nad the European Union, notably in the agricultural sector.

It was supposed to be advantageous for both Canada and the European Union.  A year later there were already rumblings in Canadian agriculture and by 2019 the Canadian Agri-food Trade Alliance (CAFTA) was saying the deal had not only not increased Canadian exports but in fact had hurt the sector.

The group said since CETA. the agriculture sector had lost about 10 per cent of its exports to Europe while imports from Europe had increased by the same amount meaning about a $3.5 billion trade imbalance.

Now one year later CAFTA wrote a letter to the EU Directorate of Trade staing its concerns about the deal writing “to express our serious concern over the lack of commitment the European Union (EU) is demonstrating to adhere to the spirit of the Comprehensive Economic and Trade Agreement (CETA)”.

The letter goes on to criticise the EU saying  the deal has harmed Canada, ” because of a wide range of technical barriers and trade distorting measures that were to be lowered or eliminated altogether through CETA continue to block access to the EU market for Canadian products. The reluctance from the EU Commission and EU member states to abide by the spirit of the CETA and remove these barriers has been disappointing and surprising given the EU’s own focus on ensuring its trade agreements are put into practice and enforced properly”.

The say the deal was to “increase Canada’s exports by nearly $1.5 billion annually. The pact also included commitments to resolve issues related to technical barriers to trade, sanitary and phytosanitary provisions and other non-tariff barriers”

It goes on to say, “CETA has now been in force for three years and it has failed to deliver on its promises for Canada’s agri-food exporters. This outcomes results from the EU Commission and EU member states continuing to impose a wide range of trade barriers for pork, beef, canola, sugar and grains, or failing to reduce those that were to be lowered or eliminated altogether through CETA

The letter goes on to urge the Prime Minister to raise concerns about what are seen as ongoing barriers and restrictions hurting Canadian agricultural exports concluding with “. In the weeks ahead, we urge you to take up these issues with your counterparts as one of your top foreign policy priorities.