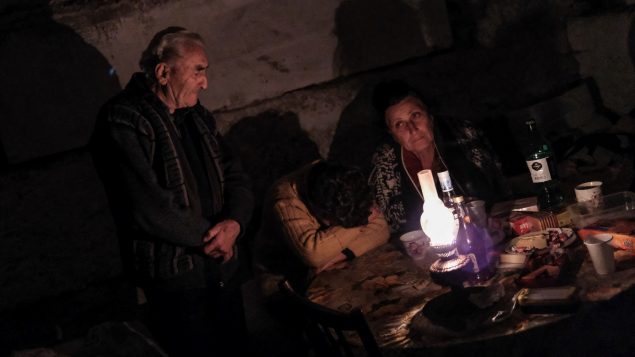 Civilians gather in the basement of a building used as a bomb shelter during a military conflict over the breakaway region of Nagorno-Karabakh in Stepanakert Oct. 5, 2020. (Areg Balayan/ArmGov/PAN Photo/Handout via REUTERS)

Canada, U.K. call for ceasefire between Armenia and Azerbaijan

Canada and the U.K. are calling on Armenia and Azerbaijan to cease fighting in the disputed Nagorno-Karabakh region and return to the negotiating table “without any preconditions.”

As fierce fighting between Azerbaijani and Armenian forces in the breakaway region continued for the tenth day, Foreign Affairs Minister Francois-Philippe Champagne and his British counterpart, Dominic Raab, stressed on Tuesday the “urgent need to end the continuing military action in and around the Nagorno-Karabakh conflict zone.”

After a relatively quiet night and morning, Armenian authorities in Stepanakert, the capital of the self-declared Republic of Artsakh, as the region is known in Armenian, reported renewed heavy shelling by the Azerbaijani military. Journalists on the ground reported the use of cluster bombs.

Azerbaijan, in turn, has accused Armenian forces of shelling the towns of Tartar, Barda and Beylagan, as well as striking the country’s second largest city of Ganja on Sunday.

“We are particularly concerned by reports of the shelling of civilian areas and wish to express our condolences to the families of those who have tragically lost their lives,” the statement by Champagne and Raab said, calling on the parties to respect the 1994 ceasefire agreement between Azerbaijan and Armenian forces in Nagorno-Karabakh and Armenia proper.

‘Unprecedented and dangerous escalation of violence’ 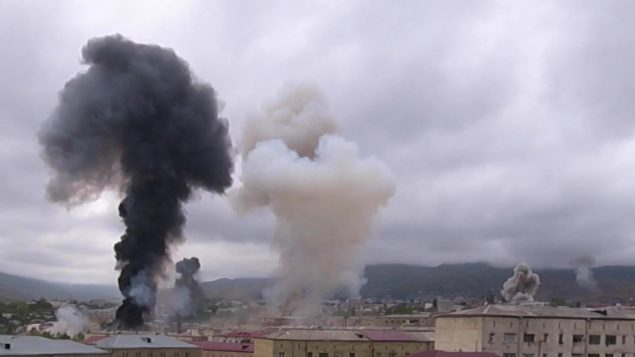 Smoke billows above the buildings during a military conflict over the breakaway region of Nagorno-Karabakh, in Stepanakert Oct. 4, 2020, in this still image taken from video obtained on Oct. 6, 2020. (Bars Media Documentary Film Studio via REUTERS)

Champagne and Raab said Canada and the U.K. firmly support the statement by the Organization for Security and Co-operation in Europe’s (OSCE) Minsk Group co-chairs – the U.S., Russia and France – calling for an immediate ceasefire.

In a joint statement Monday, U.S. Secretary of State Mike Pompeo, Russian Foreign Affairs Minister Sergey Lavrov and Jean-Yves Le Drian, France’s foreign affairs minister, condemned “in the strongest terms the unprecedented and dangerous escalation of violence in and outside of the Nagorno-Karabakh zone.”

“We urge all external parties and friends of both states to redouble their efforts in support of an end to hostilities and to refrain from taking actions that risk exacerbating the crisis,” Champagne and Raab said, in a veiled reference to Turkey, which has unequivocally backed Azerbaijan’s drive to retake the breakaway region by force.

Nagorno-Karabakh broke away from Azerbaijan in December of 1991 – weeks before the Soviet Union crumbled – after its majority Armenian population voted overwhelmingly to declare independence. Nagorno-Karabakh’s minority Azerbaijani community boycotted the referendum and Baku has never recognized its results.

‘Resolution of the Nagorno-Karabakh conflict is overdue’ 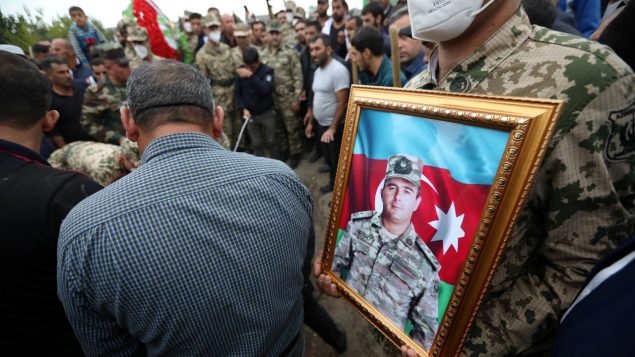 A servicemen holds a portrait of Col.-Lt. Makhman Ganbarov, who was killed during the fighting over the breakaway region of Nagorno-Karabakh, during a funeral in the city of Barda, Azerbaijan Oct. 1, 2020. (Aziz Karimov/REUTERS)

Azerbaijan’s attempt to reclaim the breakaway region by force resulted in a military defeat and Baku was forced to agree to a Russian-brokered ceasefire in 1994. The war in the early 1990s resulted in about 30,000 deaths and nearly a million refugees.

Since then, Nagorno-Karabakh has been self-governed by the local Armenian population with the full economic and military backing from neighbouring Armenia. However, no country, including Armenia, has recognized Nagorno-Karabakh’s independence for now.

After nearly 30 years of on-and-off negotiations supported by the OCSE Minsk Group the Azerbaijani and Armenian sides have failed to reach a mutually satisfactory resolution.

A comprehensive resolution of the Nagorno-Karabakh conflict is overdue and can only be delivered through a negotiated settlement and not through military action, Champagne and Raab said.

“All parties must urgently return to the negotiating table to work toward this aim without preconditions,” the joint statement said.

Prime Minister Justin Trudeau announced Monday that he is sending Champagne to Europe “to discuss with our allies the developments in Eastern Europe and the Caucasus, particularly in Nagorno-Karabakh.”

Canada also suspended exports of sophisticated drone technology to Turkey amid reports that it is being used by the Azerbaijani military against Armenian forces in Nagorno-Karabakh.

Armenia has accused Turkey of using TB2 Bayraktar combat drones, equipped with Canadian optics and laser targeting systems, to pummel Armenian forces from the air, collect intelligence and direct artillery and missile fire at both military positions and civilian infrastructure.

Armenia and France also have accused Turkey of redeploying jihadist mercenaries from Syria to support Azerbaijani forces. Turkey has denied sending people or arms to the conflict. 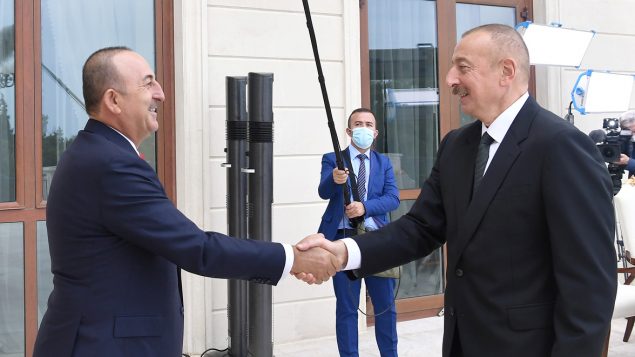 “There’s no explanation for why Canada would block the export of defence materials to a NATO ally,” the statement said.

“Canada sees no objection in exporting weapons to countries that are militarily involved in the crisis in Yemen, where one of the greatest humanitarian tragedies of this century is taking place,” the statement added – a veiled reference to Ottawa’s multibillion exports of light armoured vehicles (LAVs) to Saudi Arabia.

Speaking during a visit to Azerbaijan on Tuesday, Turkish Foreign Affairs Minister Mevlut Cavusoglu said a ceasefire alone would not be sufficient to end the fighting.

“We look at the calls coming from around the world, and it’s ‘immediate ceasefire’. What then? There was a ceasefire until now, but what happened?” Cavusoglu said in comments broadcast on Turkish television.

“There can be a ceasefire, but what will be the result?” he added. “Can you tell Armenia to immediately withdraw from Azeri lands? Can you come up with a solution for it to withdraw? No, it’s the same calls for 30 years.”