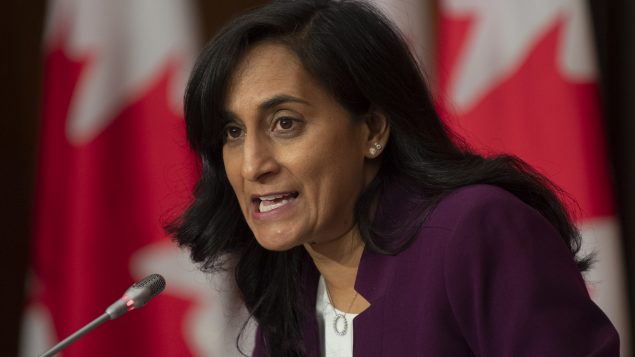 Federal regulators have approved another rapid COVID-19 test for use in Canada and Ottawa has signed a contract for over 20 million antigen test kits using this new technology, officials said Monday.

The Panbio COVID-19 Ag Rapid Test Device, which works by detecting specific proteins associated with the coronavirus, can produce results in less than 20 minutes.

The test was developed by U.S.-based Abbott Laboratories and is the first antigen rapid test authorized by Health Canada.

Dr. Howard Njoo, Canada’s deputy chief public health officer, said antigen tests are inexpensive and easy to administer and can be deployed in workplaces where there is close contact between hundreds of people – like meat-packing plants – or in long-term care facilities, homeless shelters and remote or isolated communities.

“Cases are on the rise and testing and tracing is more important than ever,” Public Services and Procurement Minister Anita Anand said Monday.

Federal Health Minister Patty Hajdu said these antigens tests will have a role to play in avoiding large cluster outbreaks, when results are needed quickly to avoid further spread of the virus.

However, the antigen tests are not designed to supplant the lab-based testing options currently in use across the country, Anand said.

“To be clear, the strategy in terms of our procurements is not to replace the standardized testing model but to enhance the capacity of provinces and territories to keep up with the increasing demand for tests,” Anand said. “Our strategy is one of diversification across various testing types and models” 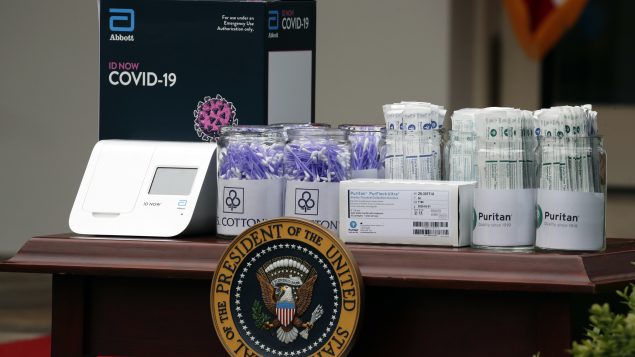 Materials for COVD-19 testing from Abbott Laboratories, U.S. Cotton, and Puritan are displayed as President Donald Trump speaks about the coronavirus during a press briefing in the Rose Garden of the White House, Monday, May 11, 2020, in Washington. (Alex Brandon/AP Photo)

Anand said 8.5 million tests will be distributed across Canada by year’s end. Canada has secured options for 12 million more tests that could be ordered in the future if the government is satisfied with Panbio’s performance.

The federal government has also signed another contract with Abbott Rapid Diagnostics to buy up to 7.9 million of its ID NOW molecular rapid tests that have been used by White House officials to screen staff since April.

“The test they’re talking about today won’t be in the hands of Canadians until the end of the year. They had months to do this and they failed,” she said in question period. “The prime minister has failed to deliver rapid tests. They’re not coming anytime soon.”