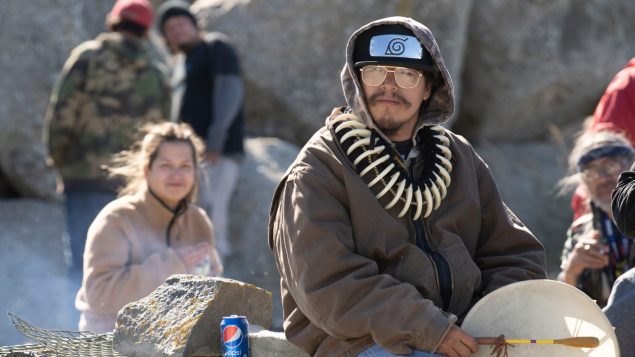 A Sipekne'katik First Nation community member holds a drum as he sits on lobster traps in Saulnierville, N.S. on Sunday, Sept. 20, 2020. On Tuesday, Oct. 13 a mob burned and vandalized vehicles belonging to Indigenous fishermen outside a lobster pound in Southwest Nova Scotia. (Mark O'Neill/THE CANADIAN PRESS)

Indigenous leaders in Canada and in Nova Scotia are condemning Tuesday’s disturbances targeting Mi’kmaw fishermen as racist hate crimes and calling for the federal government to intervene in the ongoing lobster fishery dispute between First Nations and commercial fishermen.

Indigenous leaders are also calling on the federal police force, the Royal Canadian Mounted Police, to step up their response and investigation into two incidents where groups of about 200 people threatened Mi’kmaw fishermen and vandalized their equipment and torched vehicles on Tuesday night.

“Lives are being put at risk,” said in a statement Chief Terrance Paul of the Assembly of Nova Scotia Mi’kmaw Chiefs.

“The inactions of the government and RCMP are only providing for more opportunities for people to be injured, or possibly worse. We demand that something be done immediately to stop the ongoing violence and the harassment of harvesters from Sipekne’katik, and community members, from all 13 of our Mi’kmaw communities.” 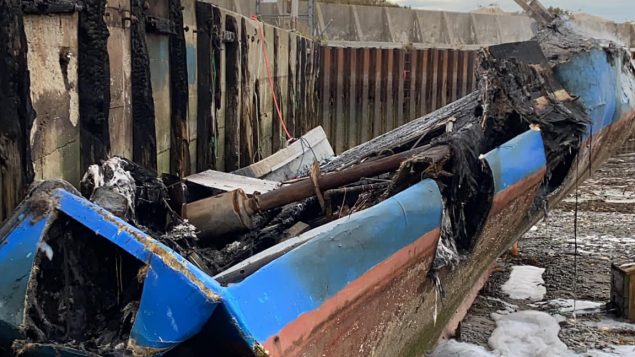 Robert Syliboy’s lobster fishing boat is shown after being destroyed by a fire in this Monday, Oct. 5, 2020 handout photo. A lobster vessel belonging to a Mi’kmaq fisher has been destroyed by a suspicious fire at a wharf in southwestern Nova Scotia, near waters where a self-regulated Indigenous fishery is underway. THE CANADIAN PRESS/HO – Robert Syliboy

Perry Bellegarde, national chief of the Assembly of First Nations, said the conflict over the lobster fishery rights in Nova Scotia has been steadily escalating for more than a month.

“It is time for the Royal Canadian Mounted Police, the federal government, and the provincial government to intervene before someone gets badly injured or, possibly, killed,” Bellegarde said in a statement.

The actions of non-Indigenous fishers are meant to harass and intimidate the First Nations, he said, adding that it “has never been a commercial disagreement.”

“The Supreme Court of Canada made it amply clear in its Marshall decision that Indigenous peoples have a right to fish those waters, and First Nations should not be bullied off the water in this thuggish manner,” Bellegarde said, referring a 21-year-old ruling by Canada’s highest court, which affirmed the Mi’kmaw right to operate a “moderate livelihood fishery.”

“We expect the federal government to ensure the safety of everyone in Canada and to bring to justice to anyone who threatens violence or deprives others of their rights to food and a modest income.”

Continued inaction by the police, and the unwillingness of the federal government to intervene directly in the dispute, only serves to increase the risk of racial violence and damage to the communities involved, Bellegarde added. 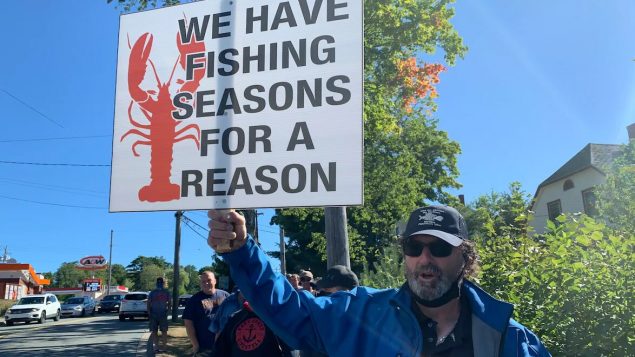 Commercial fishermen have been demanding that the federal government stop the Mi’kmaw from harvesting and selling lobster outside the commercial season. (Paul Withers/CBC)

Commercial fishermen take issue with the Mi’kmaw fishery because it operates outside their fishing season, which doesn’t start until November. They claim harvesting earlier than that is a threat to the fishery’s sustainability.

Colin Sproul, president of the Bay of Fundy Inshore Fishermen’s Association, said commercial fishermen’s concerns about conservation are not being recognized and that what’s been happening in southwest Nova Scotia this week is the result of that lack of recognition — as well as the federal government’s failure to define a moderate livelihood fishery in the years since the Marshall decision.

Sproul told CBC News that he did not condone the actions taken Tuesday night. He said it was not organized by any of the fishing associations in the area.

Officials with the Nova Scotia RCMP said they are investigating reports of “crimes against person and property including threats and mischief” related to the two incidents on Tuesday.

RCMP officials defended the actions of police officers on the ground and rejected claims police did not do enough to stop the disturbances.

“We were there to keep the peace and keep everyone involved as safe as possible in the situation,” RCMP spokesperson Sgt. Andrew Joyce told CBC News.

Federal Fisheries Minister Bernadette Jordan said in a statement that she was “appalled by the reported events” and that she condemned the destruction of property, violence and threats.

“There is no place for this kind of violence or intimidation,” Jordan said.

“Our government is seized with the issue, and we will continue to work with both First Nations and industry leadership to find a path forward.”

With files from Taryn Grant of CBC News