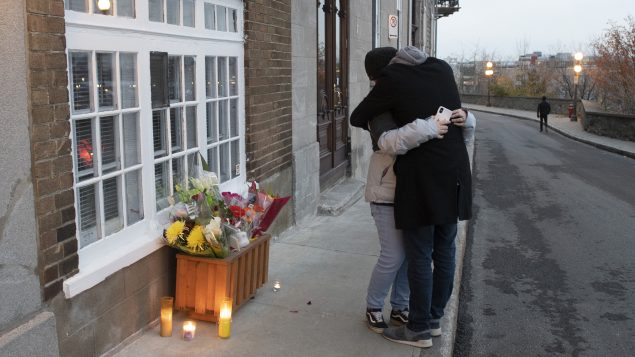 Two people comfort each other after laying flowers at Suzanne Clermont’s house in Quebec City. She was one of two people killed in a sword attack. (Jacques Boissinot/The Canadian Press)

A 24-year old man has been charged with two counts of murder and five of attempted murder after a sword attack in Quebec City on October 31, 2020. A bus will be parked near the scene to provide psychological support to those who may have witnessed the multiple scenes or who are otherwise having trouble coping.

The suspect is said to have been dressed in”medieval” clothing and to have roamed through the historic old city wielding a long, curved, Japanese sword. Police have said he is thought to have acted for personal reasons and to have acted alone.  He was picked up barefoot and suffering from hypothermia. 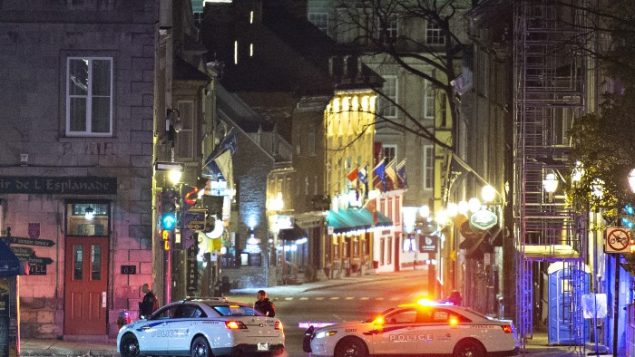 Police cars at one of several crime scenes in the historic part of Quebec City early on November 1, 2020. Two people were killed and five injured when attacked with a sword. (Jacques Boissinot/The Canadian Press)

A hint of previous violent feelings

The suspect, Carl Girouard, is from Terrebonne, north of Montreal. His neighbours say he was a nice man and had, in the past, helped with flood problems. However, four years ago, he is said to have mentioned, in a medical context, that he wanted to commit a violent act.

Among the dead was 61-year-old Suzanne Clermont, known to friends as Madam Smile. She was a hairdresser who was said to have sometimes made and delivered meals to others.

Francois Duschesne, 56, was a director of Communications at Quebec’s museum of fine arts. He was known for his sense of humour and good nature. He had been jogging at the time of the attack.

Those who were hurt will survive their injuries. A judge has forbidden the publication of their names.

The mayor of Quebec City is calling for a public discussion on mental health problems.

With files from Canadian Press and CBC News.