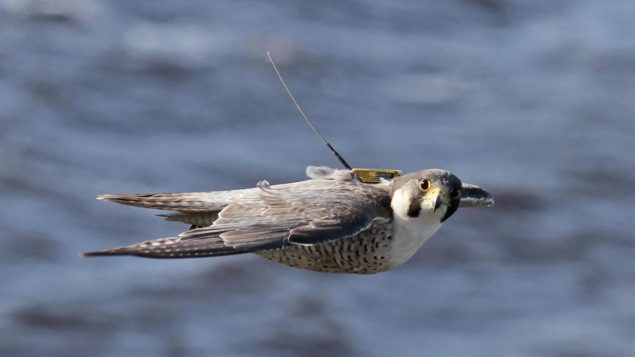 A peregrine falcon with a satellite tracking device. A new study combines a vast number of movement studies over the past three decades of 86 species.in the world's Arctic and sub-Arctic regions in relation to a changing climate (Andrew Dixon-via CBC)

In recent years many studies have noted changes in Arctic climate, said to be one of the fastest warming areas on the planet.

An important new -longterm- collaborative study of wildlife in the world’s circumpolar Arctic and sub-Arctic boreal regions is the first of its kind.

It notes changes in the habits of more than 8,000 animals of  86 species from eagles, bears, wolves, and caribou, to seals and  bowhead whales over the space of three decades. Many of these species migrate annually from several hundred to several thousands of kilometres each season.

Co-author Gil Bohrer of Ohio State University quoted in The Scientist, said  “It’s well demonstrated that with global climate change, the Arctic is experiencing a much faster rate of change than any other ecosystem on Earth, more than twice the global average. We already see parts of the Arctic that are greening and parts of the Arctic that are browning.(…) This is all the baseline of our work, and we know there is a very extreme environmental change in the Arctic.   Everything put together—human activity, climate change, changes to patterns of snow and rain and temperature, and the timing of the seasons—we expect that all of that will affect the ecology of the animals in the Arctic. It’s already been demonstrated that things are happening. We have seen changes in animal distributions, changes in the [seasonal] timing of migration, changes in the food and vegetation”. 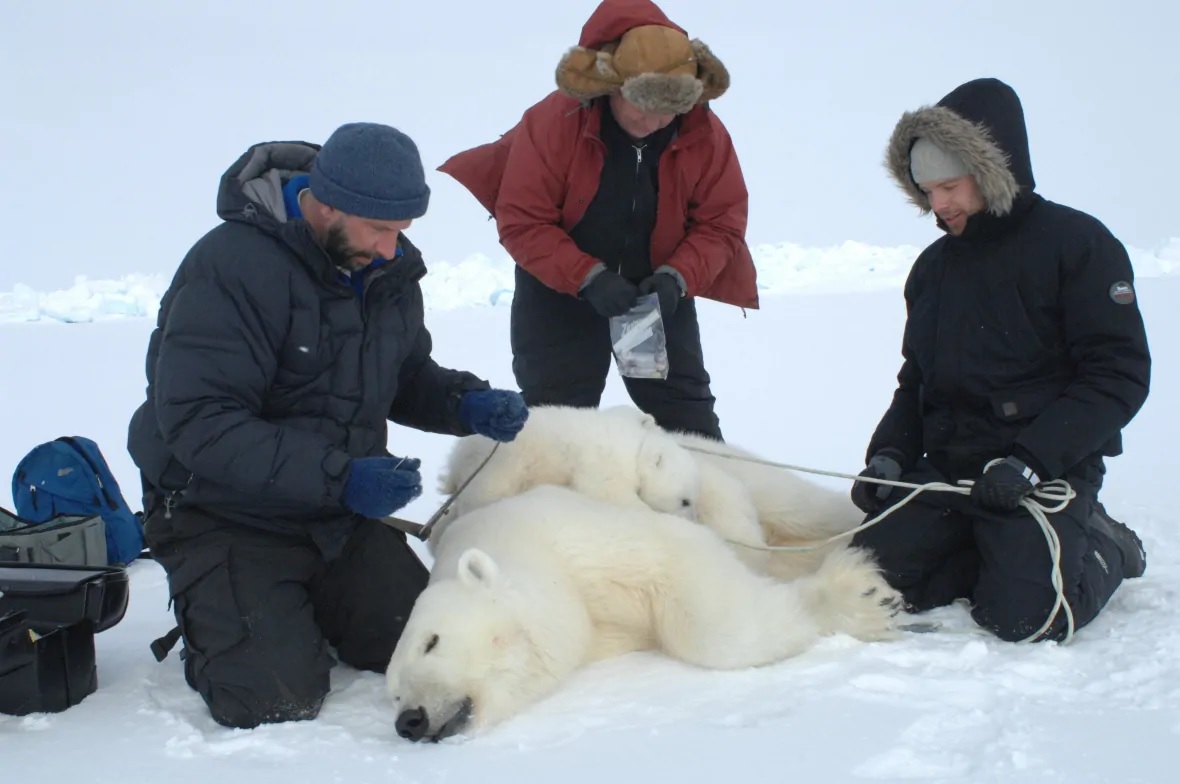 (L-R) Prof. Andrew Derocher, University of Alberta, pilot Mike Woodcock and Nick Pilfold, left to right, measure a polar bear in the Beaufort Sea region in 2011. Between 2007 and 2012, the researchers tracked 58 adult female polar bears and 18 young bears of both genders in the Beaufort Sea. They found increasing lack of sea ice was forcing many bears to make marathon swims of around 50km to find ice (Andrew Derocher)

The study involved researchers from 17 countries combining the work of over 100 universities, government agencies and conservation groups in what is being called the  Arctic Animal Movement Archive

While many individual studies have installed tracking devices on the animals over the years this was an idea to combine all the various research into a ‘big picture’ analysis. By combining all the individual studies researchers are beginning to get a better understanding of the interactions of species as well as individual changes over time.

Bohrer notes as an example, “Two of the three predators were moving less, and two of the three herbivores were moving more when it’s warmer. Since movement takes energy—and we assume in ecology the need to optimize energy—there must be more challenges when higher temperatures drive them to move more. This is an indication that as warming intensifies, you can get into what’s called a trophic mismatch. In this case, it benefits the predator and penalizes the herbivore, which will throw things out of whack”.

Researcher have noted that with warming, there is evidence of earlier migrations to the north, and for example earlier births among northern caribou, not seen in more southerly herds. This may result in the higher mortality being observed in northern caribou herds as nutritious food may not be sprouting at the same time as migrations and calving. 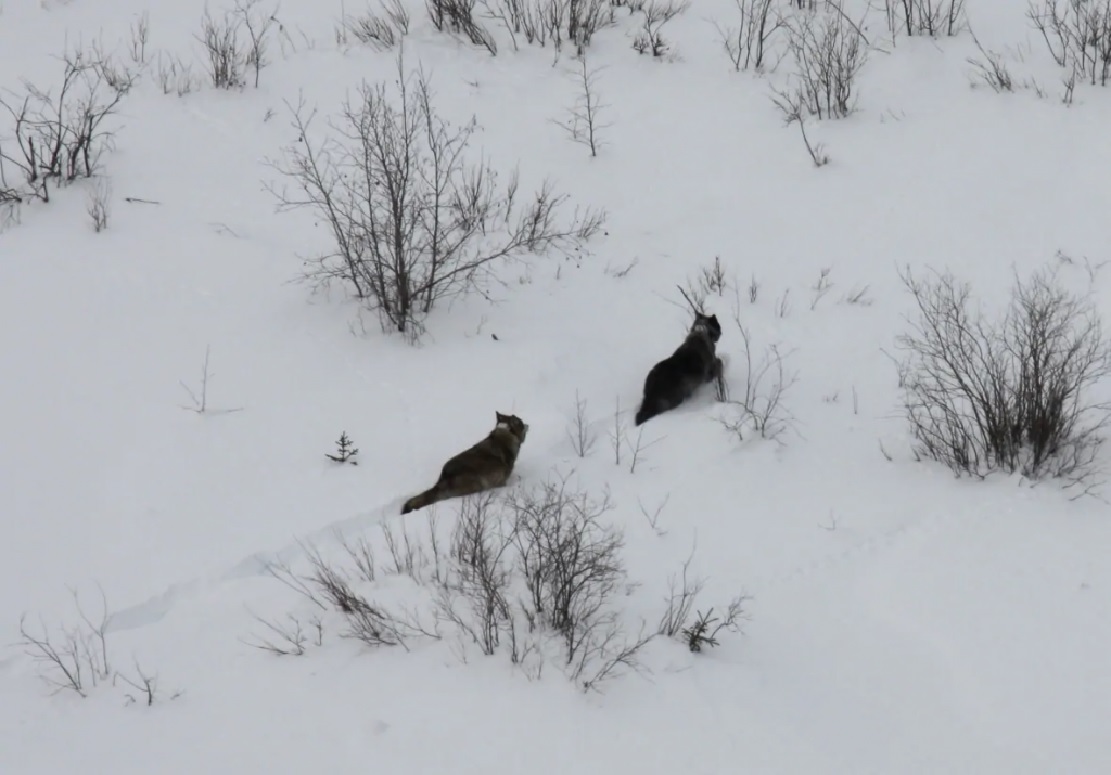 Collared wolves moving through brush onto Great Slave Lake near Fort Resolution. By examining studies over many years, scientists are learning how habits are changing in response to a changing climate (A. Kelly photo/GNWT)

Quoted in Eureka Alert, Scott LaPoint of the non-profit Black Rock Forest Consortium in New York said, “Our approach revealed the importance of assessing data that span generations and decadal climate patterns, that when ignored can dramatically affect our results and consequently management strategies”.

The databank, which continues to grow, is seen as a baseline for further study of changes to the Arctic, subarctic, and wildlife.

Co-lead researcher Sarah Davidson, data curator at the Max Planck Institute of Animal Behavior in Radolfzell, Germany said the date “can be used to improve wildlife management, address critical research questions, and document changes in the Arctic for future generations”.

This could be of great interest to Indigenous peoples in the circumpolar region who rely to large extent on subsistence hunting. It’s also hoped that studying how and where Arctic species may move in future in reaction to various environmental changes could help in conservation measures.