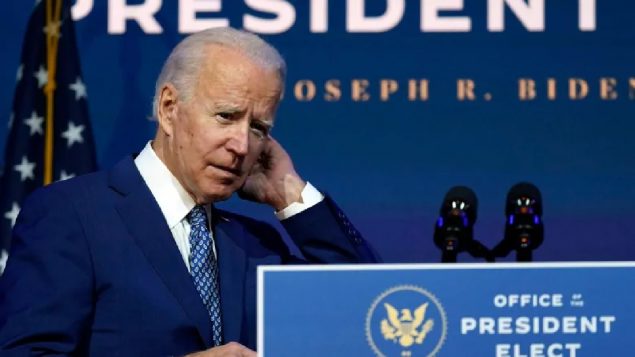 Canada hopes that a more collaborative and more unified approach to China will be possible under a U.S administration led by Joe Biden. ( Carolyn Kaster- AP)

Since December 1, 2018, Canada has been caught in the middle of a legal and diplomatic dispute involving its two major trading partners.

Legally bound by a U.S-Canada extradition treaty, Canada detained Huawei top executive Meng Wanzhou at the request of the U.S where she faces fraud and conspiracy charges as a representative of electronics giant, Huawei.

The extradition request is being fought by Meng’s lawyers in court, and another two-week series of appearances is set to begin today in British Columbia. One aspect to be brought up is the potential ‘interference’ in the legal case by comments from U.S President Donald Trump.

At one point Trump undermined Canada’s position that under western systems legal issues were entirely separate from political influence .  Trump had said that an economic deal with China ( ie a political solution) might resolve the legal issue concerning Meng. The Meng defence team will alos bring up Prime Minister Trudeau’s own request that any U.S- China trade deal  address the question of Meng and the two Canadians imprisonment. 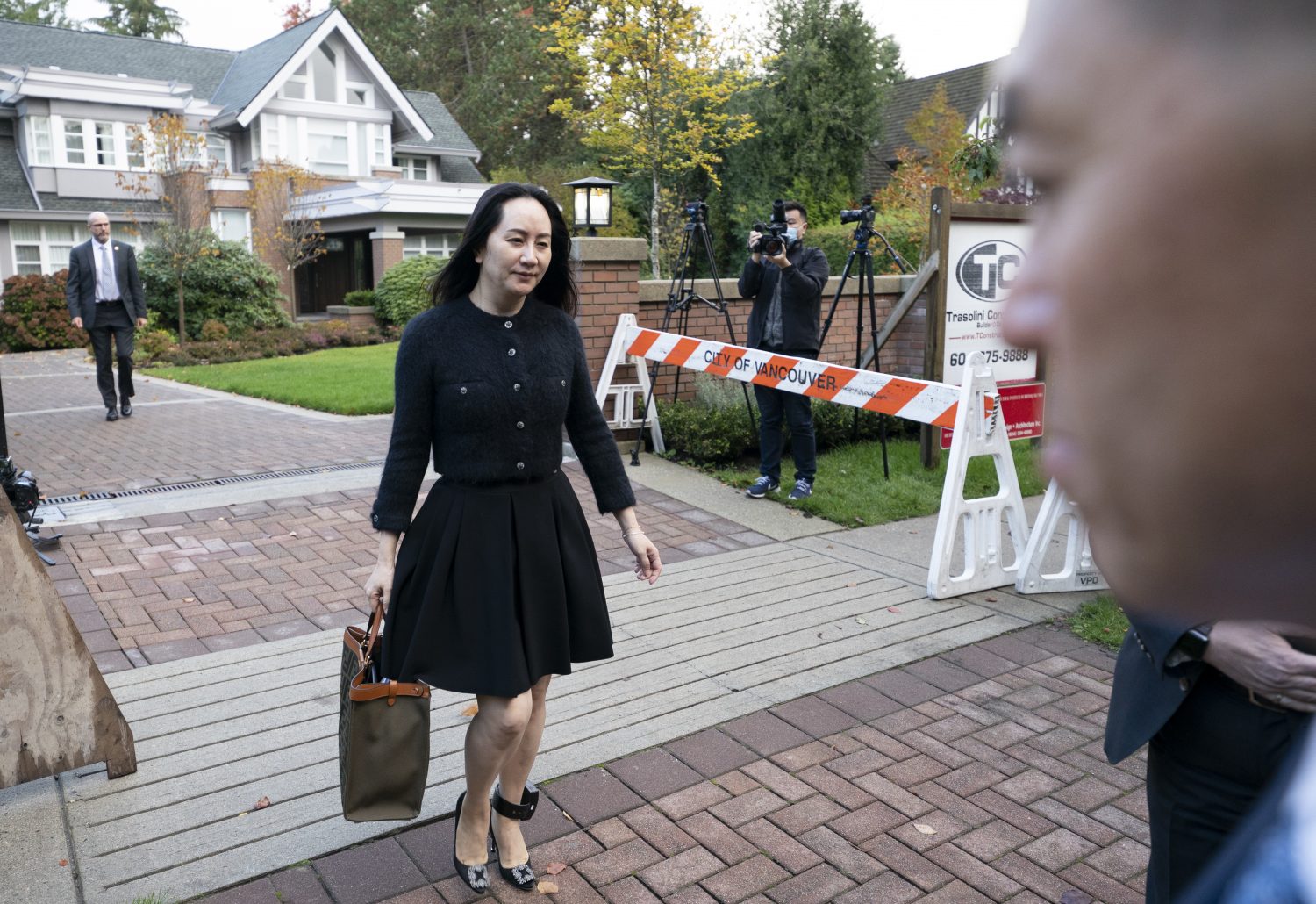 Chief Financial Officer of Huawei, Meng Wanzhou leaves her luxury home in Vancouver, Friday, October 30, 2020. Wanzhou is
back in British Columbia Supreme Court  starting today in an evidentiary hearing on her extradition case to the U.S. on an abuse of process argument in her detention. THE CANADIAN PRESS/Jonathan Hayward

Canada-China diplomatic relations are at “Arctic” levels, starting with the retaliatory arrest of two Canadians in China on alleged spying charges, and imposition of trade barriers on some Canadian agricultural products.  The war of words has continued as Canada granted asylum to two Hong Kong pro-democracy advocates.

Amid stern rebukes from China, at least one of which has been labeled as a veiled threat against Canadians in Hong Kong, Canada’s ambassador to the U.N has not held back. Yesterday he asked the U.N. to investigate China’s treatment of the Muslim Uighur minority as a ‘genocide”. China responded that Canada is more suited to the label of having committed a genocide’.

Under President Trump, the Canada- U.S-China relationship was often unpredictable as was any support for Canada’s position regarding the Canadians imprisoned in China.  Although the recent U.S. election is still contested by Trump, Joe Biden has won well over enough seats to be declared the incoming President.

While many Canadian experts have called on Trudeau to take a tougher stance against China, both Biden and Trump have also said it’s time to get tougher on international bullies.

Should Biden be legally and officially instituted as U.S President as expected, Canada now believes it will get greater support in efforts to resolve the case of the ‘two Michaels’.

Experts say Biden is likely to continue the policy of China as both an economic and strategic rival, but also that it will choose a less confrontational path than the Trump administration. This would be more in line with Prime Minister Trudeau’s approach to China. 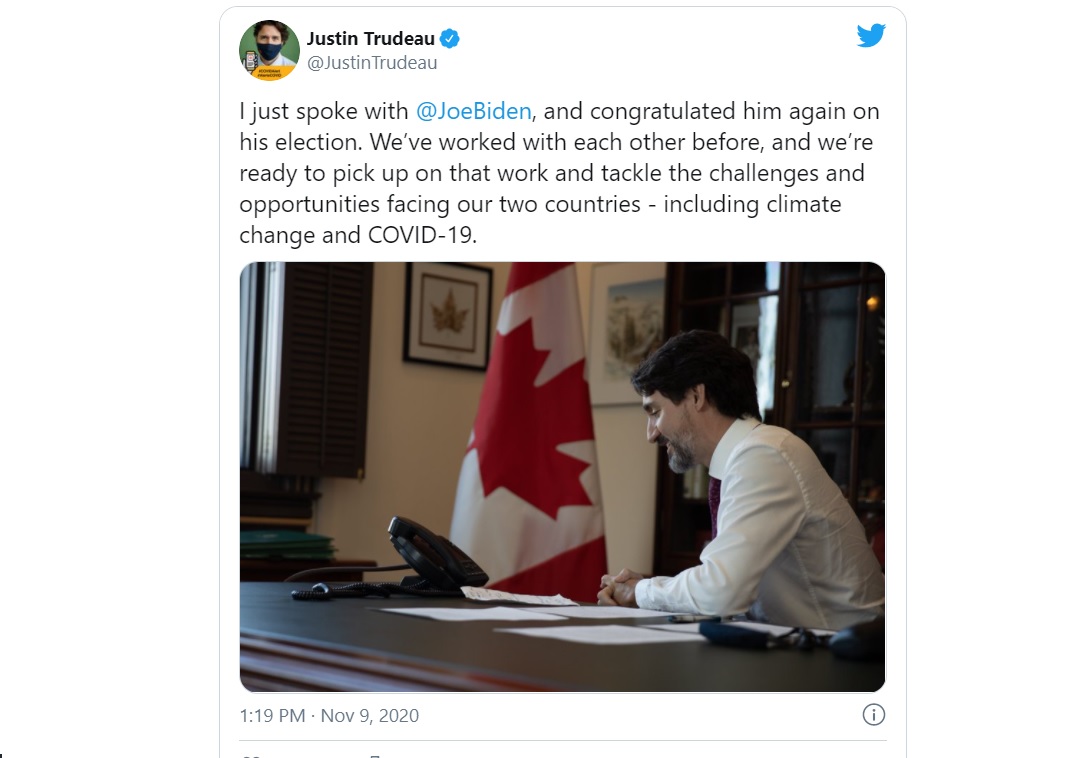 Although not mentioned in his Nov 9 tweet, Trudeau said the two also discussed the two michaels and Meng issue (Twitter)

While the hearings against  Meng’s extradition continue as to the legality of her detention in terms of a possible violation by Canadian authorities of her rights, it is not yet known whether a Biden presidency would continue an aggressive demand for extradition. This of course would have a potentially major effect on the diplomatic issues, detentions, and trilateral trade issues.

Trudeau had phoned Biden to congratulate him on his electoral win, and  said they talked about working together on specific issues  which included the “arbitrary detention’ of the two Canadians, a former diplomat and a businessman.

Experts believe that Biden has a greater sense of working with U.S. allies whereas Trump tended to adopt a more U.S centred approach to international issues.

They suggest that a Biden administration would work more closely with Canada on the ‘two Michaels’ situation in international discussions with China and the issue of Meng.  Although the Meng extradition investigation originally began under the Obama presidency, the Trump administration seem to feel the ‘two Michaels” arrest and the Meng extradition were two separate issues, whereas Canada seems them as inextricably linked.  It is hoped a new U.S administration will more readily understand the Canadian position.