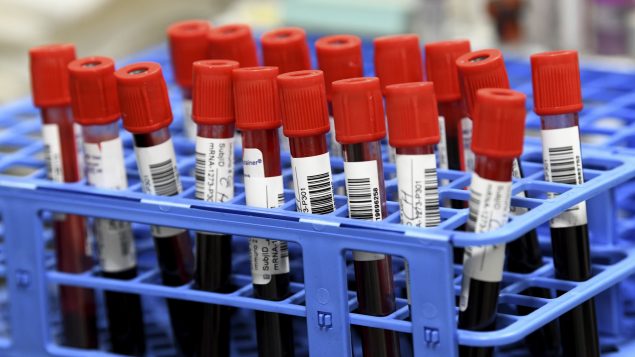 Blood samples from volunteers participating in the National Institutes of Health-funded Moderna COVID-19 vaccine third phase clinical trail wait to be processed in a lab? at the University of Miami Miller School of Medicine in Miami, Fla., on Sept. 2. (AP Photo/Taimy Alvarez)

A second COVID-19 vaccine developed by a company that has a procurement agreement with Canada is showing promising results in early trials.

Moderna announced today that preliminary data from an ongoing study show its vaccine candidate appears to be 94.5 per cent effective.

The news comes a week after one of its competitors, Pfizer Inc., announced its own COVID-19 vaccine appeared similarly effective.

Both companies have signed procurement deals with Canada. 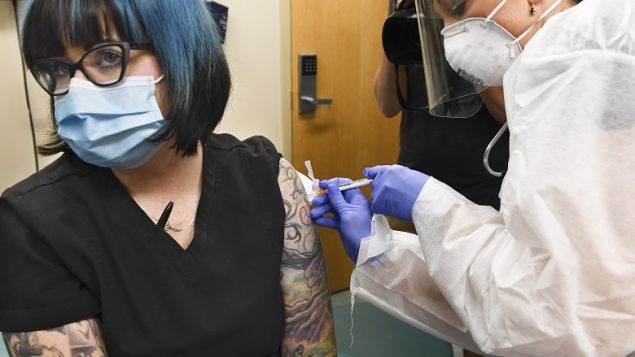 Nurse Kath Olmstead, right, gives volunteer Melissa Harting, of Harpersville, N.Y. an injection as the world’s biggest study of a possible COVID-19 vaccine, developed by the National Institutes of Health and Moderna Inc., got underway on July 27 in Binghamton, N.Y. (AP Photo/Hans Pennink)

Hoge added that having similar results from two different companies “should give us all hope that a vaccine is going to stop this pandemic and hopefully get us back to our lives.”

“It won’t be Moderna alone that solves the problem,” he told The Associated Press.

“It’s going to require many vaccines” to meet the global demand.”

Moderna and Pfizer are two of seven drug companies with whom Ottawa has signed a procurement agreement for doses of their potential COVID-19 vaccine.

They are the first companies to announce early data on large studies.

Their candidates are so-called mRNA vaccines contain a piece of genetic code that trains the immune system to recognize the spiked protein on the surface of the virus.

Because they are not made with the coronavirus itself, there is no chance anyone could catch the virus from the shots.

Companies around the world are currently competing to develop a vaccine.

With files from The Associated Press, CBC,