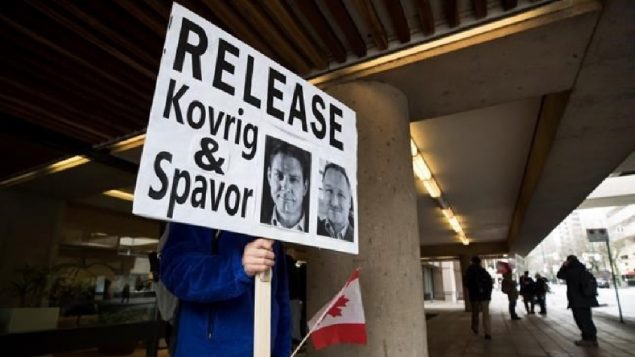 A young man holds a sign bearing photographs of Michael Kovrig and Michael Spavor, who have been detained in China for more than a year, outside B.C. Supreme Court where Huawei chief financial officer Meng Wanzhou was attending a hearing, in Vancouver, on Tuesday January 21, 2020. In his darkest moments, Michael Kovrig draws strength from knowing that his fellow Canadians and people around the world are working to free him and Michael Spavor from their respective Chinese prison cells. THE CANADIAN PRESS/Darryl Dyck

UPDATE- Global Affairs Canada released a statement after this story was filed saying there has been no change in case of the two Michaels and they had not been sent to trial as the Chinese Ministry of Foreign Affairs spokesperson had said in a regular press briefing. The statement said, “contrary to what has been reported in the media this morning, there has been no development in the cases of Michael Kovrig and Michael Spavor.”, adding,  “the confusion was caused by an inaccurate characterization of the process made by the Chinese MFA spokesperson.”

Ironically perhaps the date coincides with the anniversary of the United Nations adoption of the Universal declaration of Human Rights on this day in 1948.

Michael Kovrig a former diplomat, and businessman Michael Spavor, were arrested allegedly on charges related to espionage. They have endured months of interrogations while being detained in prisons under conditions which have been labeled as being extremely harsh. In Vancouver as extradition hearings continue, Meng Wanzhou is under house arrest in one of her two mansions and free to travel the city wearing a GPS monitoring ankle bracelet.

Many China experts have been calling on the federal government to take a tougher stance with China.

After denying consular access to the imprisoned Canadians for months in violation of international treaties, it is now reported by The Canadian Press that China says it has indicted and tried the Canadians.

During a regular press briefing Thursday, the spokeswoman for the Chinese Foreign Ministry, Hua Chunying said the two Canadians had been “arrested, indicted, and tried”.

This was the second mention that the two Michaels, held in prisons in different parts of the country, had been brought to court. The charges have the potential of punishment of a minimum ten years in prison, and potentially up to a life sentence.

The Globe and Mail newspaper today notes that on December 1, the spokeswoman also said that trials had occurred, but a Canadian diplomat later said the Chinese courts responsible for the cases indicated at that time that no such trials had taken place. 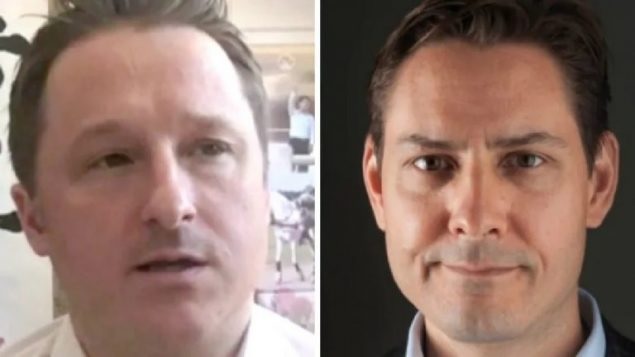 In photos which have now become well-known to Canadians, Michael Spavor, left, and Michael Kovrig were taken into custody in China on December 2018, shortly after Meng was arrested at Vancouver International Airport. They face charges of spying and have possibly gone on trial. (The Associated Press/International Crisis Group/The Canadian Press)

China’s action has at times been called ‘hostage diplomacy’, and in a statement on December 9 Canada’s Foreign Minister, Francois-Philippe Champagne labeled the arrest and detention of the Canadians as ‘arbitrary’, which has again angered China which insists everything was done according to Chinese law.

While the cases of Meng  and the two Canadians are widely viewed as directly linked, at the press briefing the spokeswoman said the two cases were ‘different’ claiming Meng Wanzhou’s detention was a political act, while the Canadians had been threatening China’s security. No details have been released on any evidence against the Canadians. 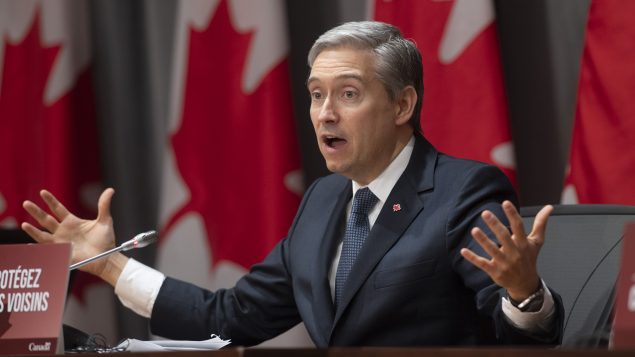 Foreign Affairs Minister Francois-Philippe Champagne gestures as he responds to a question at a news conference in Ottawa, Thursday, Apr. 2, 2020. In a statement today he said the fate of the two Michaels imprisoned in China for two years, remains ‘a top priority” (Adrian Wyld/THE CANADIAN PRESS)

The statement from the Canadian minister’s office Champagne praised the two men for their ‘perseverance’ and said their situation is an “absolute priority for our government”..

The news comes as the  Wall Street Journal reports that the U.S. is working on a deal regarding Menq Wanzhou that if true, might result in her release.

Former Canadian diplomat Colin Robertson in a comment to RCI notes, “For the Chinese Meng is the litmus test of the relationship – they see us as ‘running dogs of American imperialism’ (a phrase used only half in jest by a Chinese  official to me some months ago) .  With Meng released they will likely make some overtures – dropping the canola ban for example and buying more pork or something from us – but I think the Chinese leadership have relegated us to the third, from second. tier as not really worth their time. The current and last  ambassadors have not been of the same level as previous ones”.

Regarding a possible U.S. deal with Meng’s lawyers, he said, “If the two Michaels are not part of the deal the Trudeau Government is left holding the bag and the public will see them as weak and inept”.

Margaret McCuaig-Johnston, is a well known business and political expert on China, In an email to RCI she wrote, “If they have already been put on trial without adequate time to meet with lawyers chosen by themselves, not the court, and without adequate time to prepare a full defence to the charges which are exceptionally vague, that would be an aberration of any rule of law which requires legal counsel and time to prepare. The Canadian Government should have full consular access to them throughout this process but that has not been happening — they’ve had only one short virtual visit earlier this month”.

She then adds, “If this news is true, the only positive outcome could be if it were an attempt to deal with their cases quickly so they can be sent home”.

It is also being suggested that word of the two having been brought to trial, may be due to a translation error.  However, a statement on the website of the Chinese embassy in Ottawa also mentions the men have been prosecuted and put on trial.

The Canadian government has not commented on the story. A story in the respected Globe and Mail newspaper says the government was not aware of the supposed ‘trial’ and is now seeking clarification.