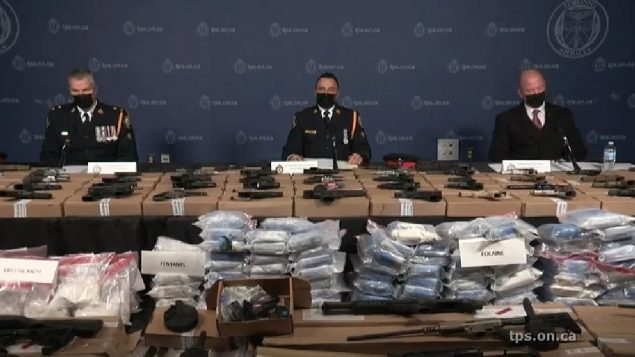 Toronto Police Services display results of a seizure at an address at an apartment on Nov 17. 2020 ( TPS)

A man with no previous criminal history has been charged in one of the biggest single gun and drug arrests in Toronto.

Police say that 22 Division learned of drug trafficking in an otherwise peaceful neighbourhood in the municipality of Etobicoke. They began a watch of the area earlier this year which eventually led to a search warrant of an apartment.

There they found 181 kilos of various illicit drugs with an estimated street value of over $18 million including cocaine, crystal meth, fentanyl, and MDMA.

They also found a huge cache of illegal firearms, 65 in all, including 57 handguns, including a banned Uzi submachine gun, eight long guns, some banned over-capacity magazines, and over 15,000 rounds of ammunition. 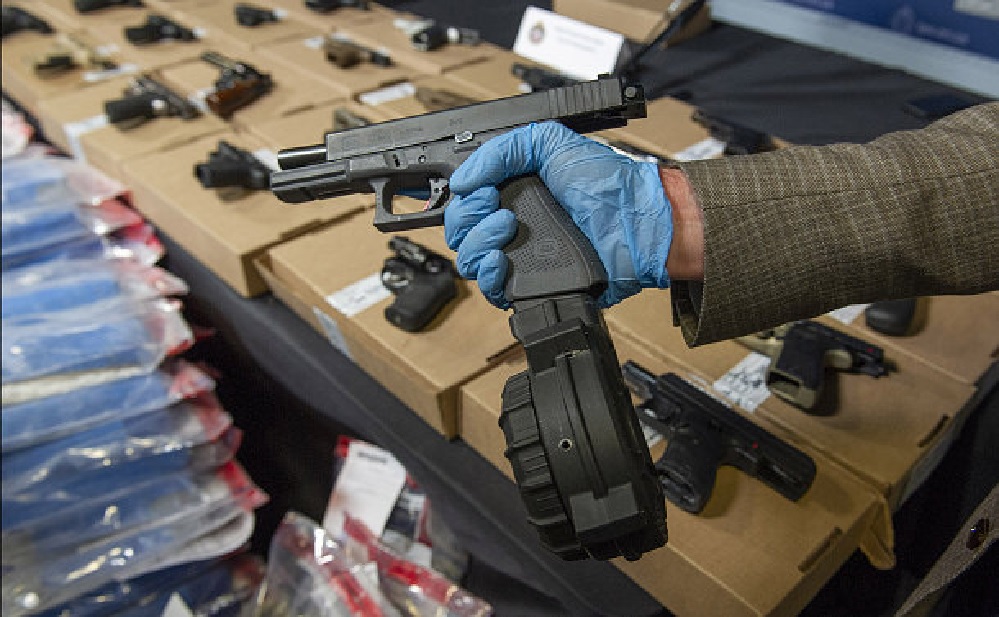 Police show one of the pistols and a banned high capacity 50-rd magazine. A spokesman said the process of tracing the guns in ongoing but that they believe most were smuggled in from the U.S. (TPS)

Supt. Domenic Sinopoli told reporters Wednesday afternoon.  “We allege that these guns were destined for street gang use and as such presented a significant threat to public safety”.

Det. Ray Direnzo, of the 22 Division Major Crime Unit, said the investigation was routine for his team that deals with everything from break and enters to drug and gun investigations.

“You never know what’s on the other side of the door in a search warrant – you know why you’re there but not always what you’re going to find,” said the 31-year veteran. “In this case, it was the motherlode.”

Toronto has many incidents and deaths from brazen gang shootings this year. In one case wild shooting led to the death of a 12 year old boy walking nearby with his mother on their way to go shopping in the Jane-Finch area of the city, an area well-known to police for its violence

The Etobicoke apartment raid on Nov.17 resulted in the arrest of 45-year-old Daniel Dubajic now faces several dozen charges related to the illegal firearms and drugs.

He is scheduled to appear in court Jan. 7