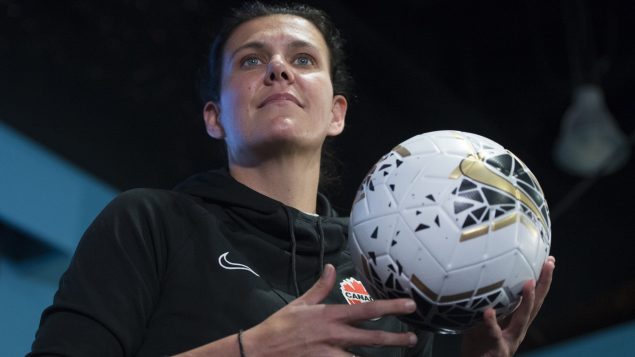 Christine Sinclair is photographed during a media availability in Vancouver on February 11, shortly after setting the all-time record for most international goals by an individual player--female or male. On Monday, she won her second Bobbie Rosenfeld Award as The Canadian Press's female athlete of the year. (THE CANADIAN PRESS/Jonathan Hayward)

For Canadians in general and Canadian sports fans in particular, it must seem like an eternity since the country’s very own soccer icon, Christine Sinclair, scored her historic goal–the one that made her the all-time leader on international soccer’s scoring list.

For the record: Sinclair scored career goal No. 185 in the 23rd minute of Canada’s opening match against St. Kitts and Nevis on Jan. 29 at H-E-B Park in Edinburg, Texas.

The game was part of the CONCACAF Women’s Olympic Qualifying Tournament, a tournament that saw Canada qualify for 2020 Tokyo Olympics–an Olympics yet to be held because of COVID-19.

The goal moved Sinclair past retired American Abby Wambach, a long-time rival, who had held the world record of 184 goals since 2013.

“When we think back to some of the great moments in sport, we can cherish the moment that our Canadian captain Christine Sinclair became the world’s all-time international goal-scoring record holder,” Canada Soccer president Nick Bontis said in a statement earlier this month as Sinclair’s goal was named the 2020 Canada Soccer Moment of the Year.

“To score 185 goals at the international level is an incredible feat and we may never get to see such a thing again in our lifetime. Watching Christine Sinclair lead Canada on the world stage has offered all of us some of the best memories as sports fans and as proud Canadians.”

Sinclair currently has 186 goals and 55 assists in 296 international appearances.

And she now has two Bobbie Rosenfeld Awards as The Canadian Press female athlete of the year.

On Monday, CP announced Sinclair the winner in a vote by sports editors, writers and broadcasters across the country. 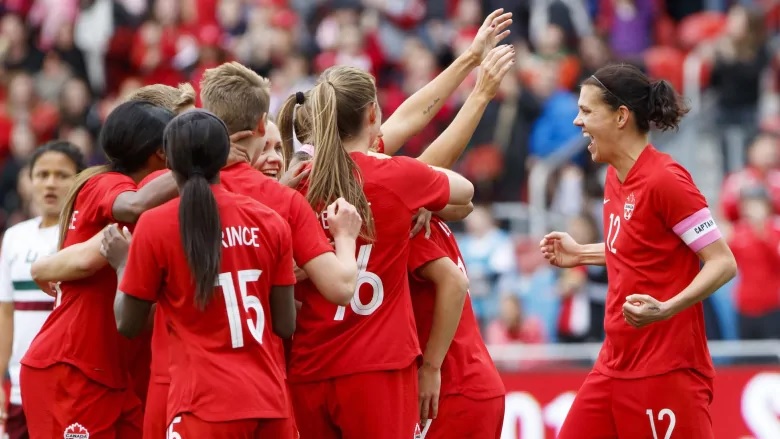 Christine Sinclair, right, is celebratedf by teammates in January after scoring the 185th international goal of her career. (THE CANADIAN PRESS/Cole Burston)

Last year’s winner, tennis star Bianca Andreescu, did not compete in 2020 because of injuries.

Sinclair also won the award in 2012 when she paced Canada to a bronze medal at the London Olympics.

The Canadian women haven’t played a game since March 10 when they drew Brazil 2-2 at a tournament in France.

Canada is currently tied with Brazil at eighth place in the world rankings.

The Tokyo Olympics are scheduled to begin next July–the COVID-19 pandemic permitting.

With files from The Canadian Press (Neil Davidson), CBC News