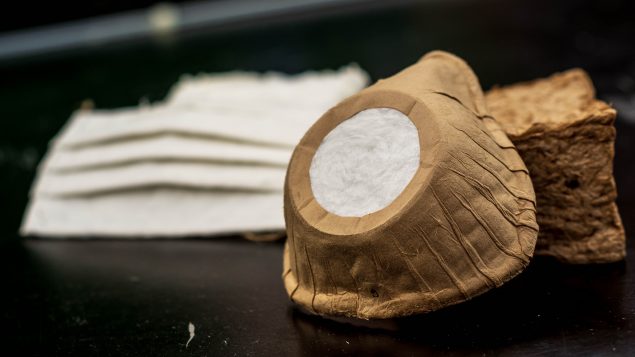 The Can Mask, developed at the BioProducts Institute, matches the performance of disposable polypropylene masks but is much safer for the environment, according to its creators. (Photo by Paul Joseph)

A team of Canadian scientists at the University of British Columbia has developed a biodegradable face mask using natural cellulosic fibres and nano-materials made from wood-based products.

The Can Mask, developed at the BioProducts Institute, matches the performance of disposable polypropylene masks but is much safer for the environment, according to its creators.

“Compared to a surgical mask the breathability is pretty good, probably better, and then, what matters the most, the filtration efficiency is up to a standard of a surgical mask, even a little bit better,” said Orlando Rojas, Professor and Canada Excellence Research Chair, and Scientific Director at the BioProducts Institute.

As part of UBC’s Faculty of Applied Science, the BioProducts Institute develops ways to use renewable resources existing in nature as alternative solutions to fossil fuel derived materials.

“The main principle is to use wood or plant fibres and they are assembled together as in paper… and the fibres are assembled in such a way that you have enough porousity for breathing and yet you can filter out the virus particles,” Rojas said.

The main shell of the mask uses inexpensive paper-type materials that are readily available and in the centre the mask has a specially engineered filter or a membrane that ensures high breathability and filters out tiny particles, Rojas said. 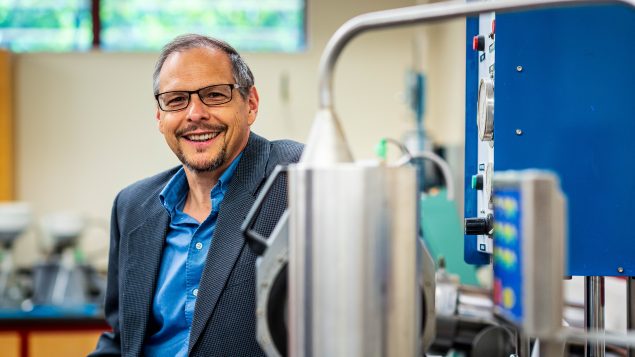 The biodegradable face mask is part of the institute’s effort to mitigate the impact of the dramatic rise in the use of single-use plastics, which according to some estimates has spiked by 40 per cent worldwide since the onset of the COVID-19 pandemic.

Earlier this year, an article in the journal Environmental Science and Technology warned that mismanagement of personal protective equipment (PPE) during the COVID-19 pandemic – with a monthly estimated use of 129 billion face masks and 65 billion gloves globally – is resulting in widespread environmental contamination.

In the meantime, while restaurants and bars have been shut down for sitting customers for much of the first and second wave of the pandemic, there has been an unprecedented increase in food take-out, goods deliveries, and use of plastic grocery bags over reusable fabric totes in order to minimize viral transmission.

“In a PP [polypropeline] mask biodegradability doesn’t exist, a PP mask is used for a very short time – similar to any single use plastics, which are used on average for 12 minutes – but they last for thousands of years,” Rojas said. “On the contrary, the fibre masks are fully biodegradable, and not only biodegradable, they are compostable.” 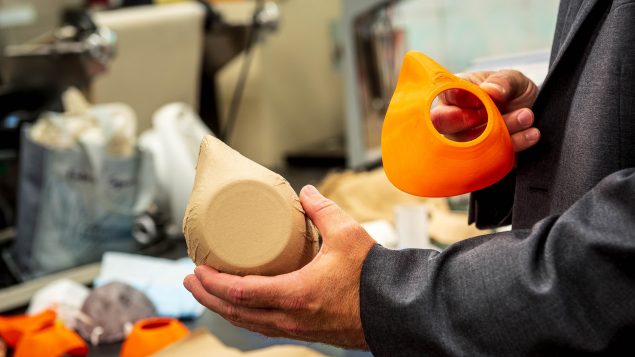 Orlando Rojas oversees early prototyping of facemasks in the facilities of the BioProducts Institute (www.bpi.ubc.ca), UBC. (Photo by Paul Joseph)

In addition, unlike polypropeline masks, these fibre masks don’t create microplastics if they end up in the water column, which is a huge issue with all single use plastics, he added.

Currently hospitals have only two options to deal with used polypropeline masks: to incinirate them or to send them to landfill to avoid them becoming a vector for spreading pathogens, Rojas said.

The fibre masks, on the other hand, can be safely recycled like any other recyclable paper, he said.

“Paper can be put back in water and it goes through a series of processes at high temperature and alcalyne conditions that really will let the fibres to be reused without any concerns about the viruses, because viruses wouldn’t survive those conditions,” Rojas said.

The Can Mask developed by the BioProducts Institute is not the only Canadian biodegradable mask.

FPInnovations Inc., a Quebec-based forestry innovation organization, announced in September that it too has developed a single-use face mask filter out of fully-biodegradable wood products.

And a company in Vietnam claims to have made reusable, biodegradable and antibacterial face masks using coffee beans.

Rojas said they are in talks with a major mask producing company that is interested in commercializing their invention and getting all the regulatory approvals needed for the mask to be used in medical settings.