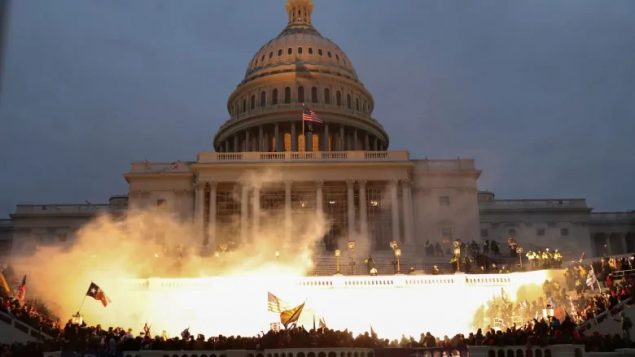 An explosion caused by a police munition is seen while supporters of U.S. President Donald Trump gathered in front of the U.S. Capitol Building in Washington on Wednesday. Canadian politicians reacted to the violence with sadness and shock. (REUTERS/Leah Millis)

Canadian leaders react with sadness and shock to Washington violence

Prime Minister Justin Trudeau and other prominent Canadian politicians have reacted with sadness and shock to the storming of the U.S. Capitol on Wednesday by supporters of President Donald Trump–an attack that left four people dead.

In a social media post on Twitter Wednesday night, Trudeau said Canadians were “deeply disturbed and saddened” by the attack and that “Democracy in the U.S. must be upheld–and it will be.”

“Violence will never succeed in overruling the will of the people,’ Trudeau said in the tweet.

Canadians are deeply disturbed and saddened by the attack on democracy in the United States, our closest ally and neighbour. Violence will never succeed in overruling the will of the people. Democracy in the US must be upheld – and it will be.

Earlier in the evening, Trudeau told a Vancouver radio audience:

“I think the American democratic institutions are strong and hopefully everything will return to normal shortly. We’re going to continue to do what we need to do to make sure that Canadians are well served in our relationship with the United States, regardless of how things unfold,” he said.

Canada is deeply shocked by the situation in Washington DC. The peaceful transition of power is fundamental to democracy – it must continue and it will.

We are following developments closely and our thoughts are with the American people.

Tweeting that he was “deeply saddened,” Conservative leader Erin O’Toole called the attack “an astonishing assault on freedom and democracy.”

The storming of the Capitol Building is an astonishing assault on freedom and democracy. I am deeply saddened to see chaos grip our greatest ally today.

The horror unfolding in Washington is frightening and it was incited by Donald Trump.

He can end it now, but refuses to.

Democracy must not be intimidated.

The violence must end.

The comments by the leaders of Canada’s three three major federal parties were generally echoed by other leaders and provincial premiers.

Tweeting in French, Bloc Quebecois leader Yves-François Blanchet said the situation was provoked by Trump’s actions and those who follow him.

Green Party Leader Annamie Paul said events in Washinton “underscore the importance of respect for the rule of law and the peaceful transfer of power –principles upon which any healthy democracy depends.”

And Quebec Premier François Legault said he believed that the U.S. is a “great country” that “will rebound as it has always done in its history.”

At around 4 a.m. Thursday morning, the Congress certified Joe Biden as the the next president of the United States–the thing Trump and his supporters had feared most–the fear that drove them to attack a building known to Americans as “The Peoples’ House.”

With files from CBC News (Peter Zimonjic), The Canadian Press, The Associated Press