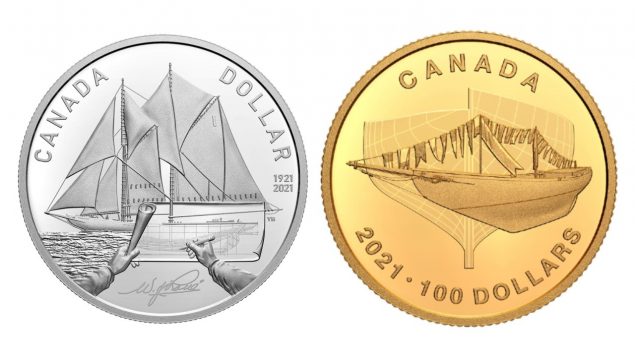 The Royal Canadian Mint is celebrating the centenary of Bluenose with the launch of two commemorative coins dedicated to the legendary Canadian schooner.

The annual $100 Pure Gold Coin and Proof Silver Dollar commemorate the legacy of the original Bluenose, which was launched as a Grand Banks fishing and racing schooner on March 26, 1921 in Lunenburg, Nova Scotia.

Designed by William Roué and built by the Smith and Rhuland Shipyard she took home her first Fishermen’s Trophy in October of 1921 and held on to the prize for the next 17 years, earning the title “Queen of the North Atlantic” and as well as becoming a Canadian icon.

The depiction of Bluenose has adorned the Canadian 10 cents coin since 1937. 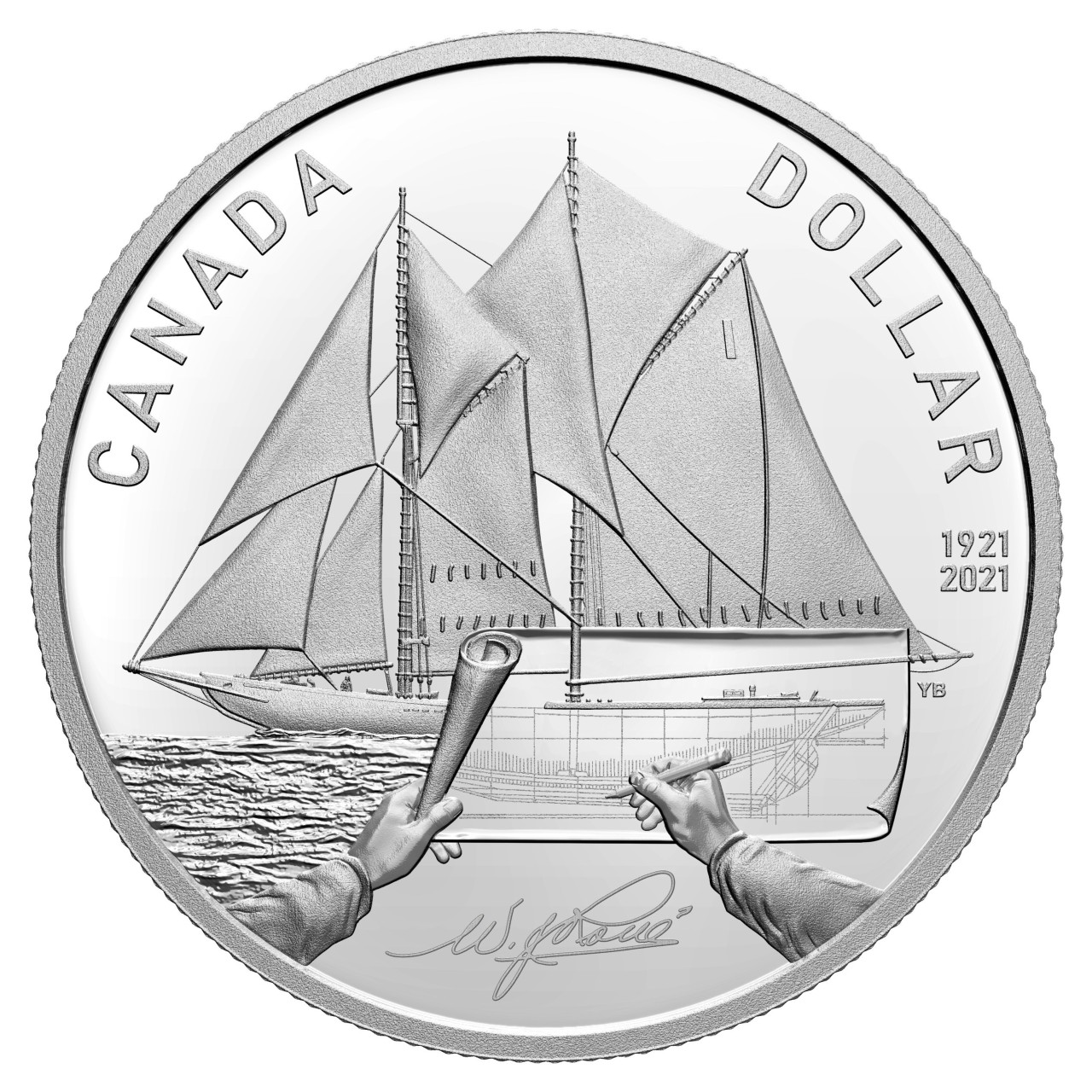 “Bluenose is near and dear to my heart. I am a proud Nova Scotian, but the familial connection to the story makes it that much more special,” Roué said. “The 2021 Proof Dollar helps keep my great-grandfather’s legacy alive and represents an opportunity to re-educate Canadians on the significance of the vessel on our dime.”

Marie Lemay, president and CEO of the Royal Canadian Mint, said the ingenuity behind Bluenose is synonymous with Canadian innovation and know-how, and a matter of national pride that spans generations.

The reverse of the 2021 Proof Silver Dollar features the work of Canadian marine artist Yves Bérubé.

Bérubé’s design illustrates part of the original plans of Roué’s Design No. 17, which would become Bluenose, the legendary schooner under full sail. The architect’s hand can be seen finishing the drawing, as is an engraving of his signature, as it appeared on the original Bluenose sail plan.

The obverse features the effigy of King George V, who was Canada’s monarch in 1921.

“It doesn’t matter which part of Canada you were from, she represented us all—and still does. I can’t imagine a Canada without Bluenose,” Bérubé said in a statement. “For me, Bluenose is more than just a ship. She is a proud, beautiful symbol of history and tradition on the East Coast, where she represents every sailor, fisherman and shipbuilder.” 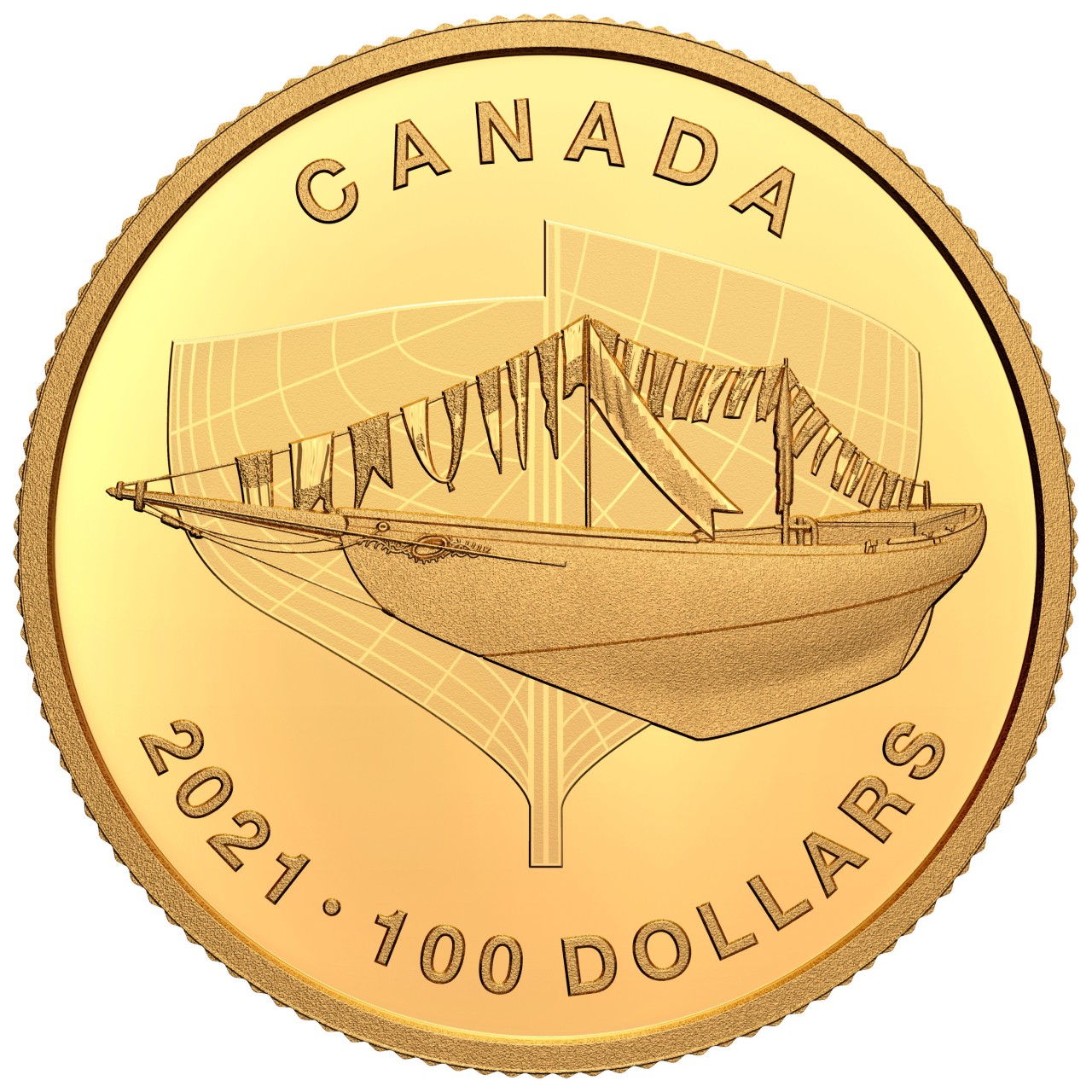 The reverse of the $100 Pure Gold coin is inspired by a historical photograph and Roué’s hull design to show two perspectives of Bluenose.

The newly finished hull, adorned with signal flags on its March 26, 1921 launch, appears to float over a cross-sectional diagram showing both the bow and stern of Bluenose. The obverse features the effigy of Queen Elizabeth II by Susanna Blunt.