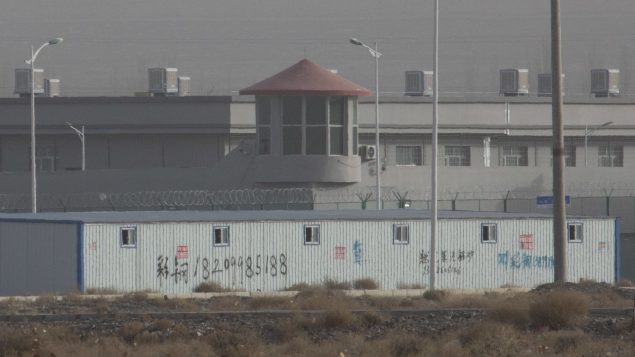 FILE - In this Monday, Dec. 3, 2018, file photo, a guard tower and barbed wire fences are seen around a facility in the Kunshan Industrial Park in Artux in western China's Xinjiang region. (AP Photo/Ng Han Guan, File)

As Beijing lashed out at the outgoing U.S. Secretary of State Mike Pompeo for designating China as a perpetrator of genocide and crimes against humanity in the western province of Xinjiang, Foreign Affairs Minister Marc Garneau said Canada takes those allegations “very seriously.”

In an embarrassing blow to Beijing a day before U.S. president-elect Joe Biden was to take office, Pompeo accused the Chinese Communist authorities of committing “genocide against the predominantly Muslim Uighurs and other ethnic and religious minority groups in Xinjiang.”

“I believe this genocide is ongoing, and that we are witnessing the systematic attempt to destroy Uighurs by the Chinese party-state,” Pompeo said in a statement.

Garneau said the mounting evidence of a systematic campaign of repression in Xinjiang cannot be ignored.

“From the beginning Canada has said that the international community has to work together in order to investigate the egregious human rights abuses taking place in Xinjiang,” Garneau said in an emailed statement to Radio Canada International.

Canada will review the findings released by the U.S. Department of State on the human rights situation in Xinjiang, he added.

China has imprisoned more than 1 million people, including Uighurs and other mostly Muslim ethnic groups, in a vast network of prison-like political indoctrination camps, according to U.S. officials and human rights groups. People have been subjected to torture, sterilization and political indoctrination in addition to forced labor as part of an assimilation campaign in a region whose inhabitants are ethnically and culturally distinct from the Han Chinese majority.

“We continue to call on China to grant unfettered access to Xinjiang for the United Nations and the Office of the High Commissioner for Human Rights,” Garneau said.

“Canada will continue to collaborate with its partners and push for an investigation by an international, independent body so that impartial experts can observe and report on the situation first-hand.”

‘A piece of wastepaper’ 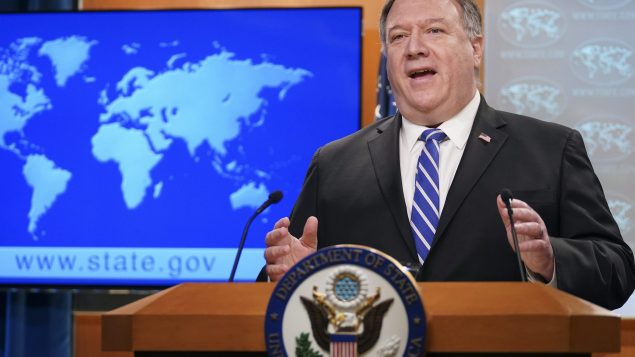 Secretary of State Mike Pompeo speaks during a news conference at the State Department in Washington on Wednesday, May 6, 2020. (Kevin Lamarque/Pool Photo via AP)

But China’s Foreign Ministry dismissed these allegations as “a piece of wastepaper.”

The allegations of abuses against Muslim minority groups in Xinjiang region are “outright sensational pseudo-propositions and a malicious farce concocted by individual anti-China and anti-Communist forces represented by Pompeo,” Foreign Ministry spokesperson Hua Chunying told reporters at a daily briefing.

“In our view, Pompeo’s so-called designation is a piece of wastepaper. This American politician, who is notorious for lying and deceiving, is turning himself into a doomsday clown and joke of the century with his last madness and lies of the century,” Hua said.

Pompeo’s announcement Tuesday doesn’t require any immediate actions, although the U.S. must take the designation into account in formulating policy toward China. China says its policies in Xinjiang aim only to promote economic growth and social stability.

The U.S. has previously spoken out and taken action on Xinjiang, implementing a range of sanctions against senior Chinese Communist Party leaders and state-run enterprises that fund repressive policies in the vast, resource-rich region. Last week, the Trump administration announced it would halt imports of cotton and tomatoes from Xinjiang, with Customs and Border Protection officials saying they would block products from there suspected of being produced with forced labor.

Many of the Chinese officials accused of having taken part in repression are already under U.S. sanctions. The “genocide” designation means new measures will be easier to impose. 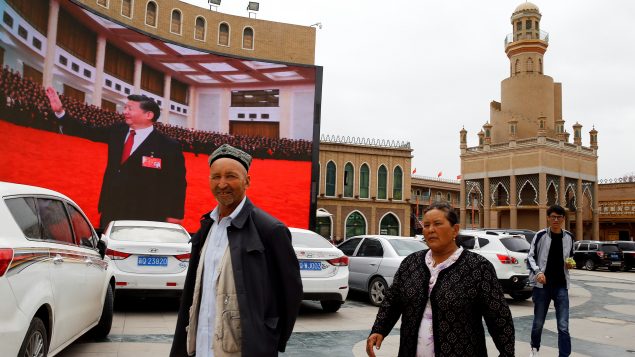 International Trade Minister Mary Ng said the Trudeau government is committed to making sure that Canadian businesses are not unknowingly involved in any supply chains involving forced labour.

In a statement posted on its website, the Chinese embassy in Ottawa accused the federal government of making “blatant accusations” over the human rights situation in Xinjiang and “falsely claiming the practice of ‘forced labor’ and ‘mass arbitrary detention’” to impose trade restrictions on products made in Xinjiang.

“By doing so, the Canadian side has grossly interfered in China’s internal affairs and seriously violated the international laws and the basic norms governing international relations,” the statement said. “The Chinese side expresses its strong dissatisfaction, and firm opposition over this and strongly condemns such actions.”