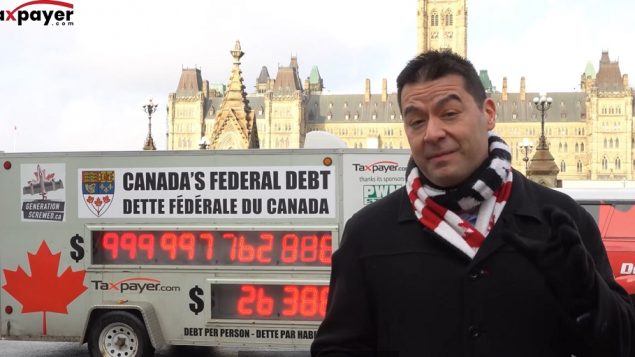 The Canadian Taxpayer Federation national debt clock and director Aaron Wudrick, in front of Parliament in December, showing the debt is about to hit one trillion dollars ( CTF)

The Canadian Taxpayers Federation (CTF) is a non-profit taxpayer advocacy group that keeps its eye on government spending at all levels.  Founded in 1990 and funded by free-will donations, the organization annually hands out pig-shaped ‘awards’ for the most egregious cases of wasting of taxpayer’s money. Called the ‘Teddy Awards’, the trophies are named after a federal appointee who was eventually fired after submitting a substantial number of dubious expense claims including a $700 claim for a lunch for two.

Not long after its formation, the CTF had the ‘national debt clock’ built to highlight the rapidly increasing level of federal government deficit spending.  When a subsequent government balanced the budget in 1998 the clock was put in storage, only to be brought out again in 2009 when the following government went back into deficit spending.

Justin Trudeau and the Liberals came to power in 2015 promising to balance the budget again. Instead, there were major deficits every year.

Emergency funding measures during the pandemic have racked up an estimated $381 billion in deficit spending this year, and in doing so ‘broke’ the CTF Debt Clock, which simply ran out of numbers to record the increasing debt as it hit one trillion dollars. 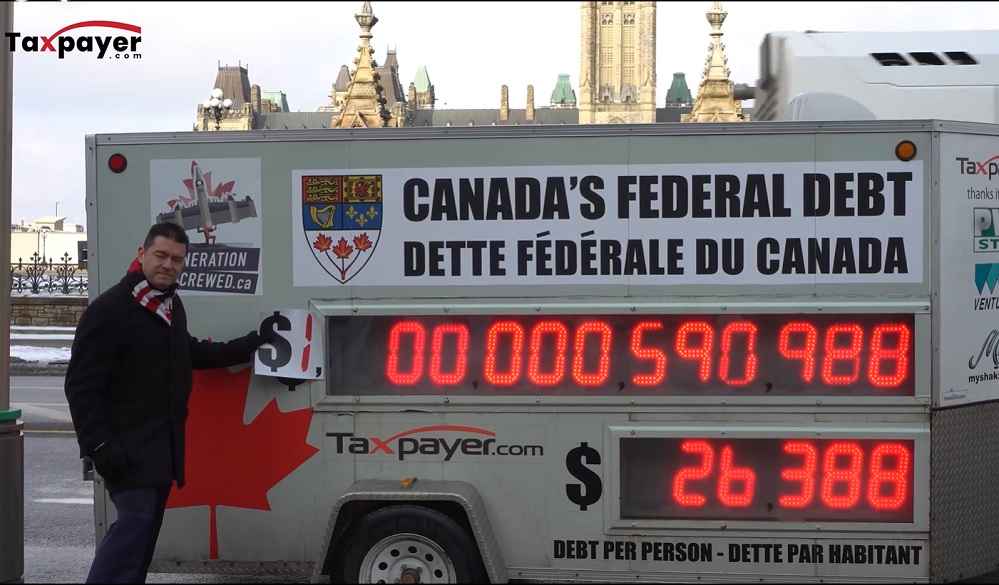 CTF director Aaron Wudrick holds up a paper number 1 as the debt clock rolls past one trillion dollars. “Our National Debt Clock no longer has enough digits to display the size of our federal debt, because nobody ever dreamed the debt would grow this big.” (CTF)

According to the CTF, Canada’s national debt increasing $10,000 per second, $43 million per hour or $1 billion every day.

CTF Federal Director Aaron Wudrick says “This government cannot blame the pandemic for the fact it broke its own promise to balance the budget and racked up more than $100 billion in additional debt during its first four years in office”, adding, “nor can it justify $100 billion more in debt-financed spending in coming years, especially since it doesn’t even know what it’s spending it on.”

The CTF debt clock is not undergoing modifications in order to cope with the new trillion dollar figure.