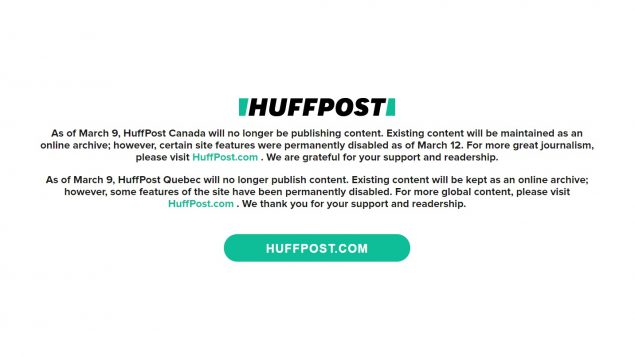 A message displayed on the HuffPost Canada site announces they will no longer be publishing content as of March 9, in this screengrab taken Tuesday, March 9, 2021. HuffPost Canada says in a message on its website that it will no longer be publishing content. It says existing content will be maintained as an online archive, but that certain site features were permanently disabled as of March 12. (THE CANADIAN PRESS/HO - HuffingtonPost.ca)

HuffPost Canada and HuffPost Quebec will not publish content anymore, according to a statement the outlet posted on its website on Tuesday.

“As of March 9, HuffPost Canada will no longer be publishing content. Existing content will be maintained as an online archive; however, certain site features were permanently disabled as of March 12,” the statement said.

In a tweet, the HuffPost Canada Union posted that all the staff are now out of a job.

“Today is a sad day. This morning, we found out that BuzzFeed will be shutting down operations of HuffPost Canada and Quebec next week,” they said in a tweet.

Today is a sad day. This morning, we found out that BuzzFeed will be shutting down operations of HuffPost Canada and Quebec next week.

All of our staff are now out of a job.

HuffPost Canada and HuffPost Quebec officially filed to join CWA Canada, which is Canada’s only all-media union, on Feb. 23. In a follow up tweet, the HuffPost Canada union said that they were told the decision to shut down operations was made before their organizing effort and is not linked to their unionizing.

Buzzfeed originally announced that they had acquired HuffPost in November 2020. According to CBC, Buzzfeed also announced layoffs in the United States.

In a tweet, CWA Canada criticized the decision and said that they were “shocked and appalled.”

The Buzzfeed Canada union released a statement standing in solidarity with the HuffPost Canada union.

“We also strongly condemn the decision to take these websites’ homepages offline barely an hour after employees were told of their impending closure, and without warning,” the Buzzfeed Canada union said.

Today, BuzzFeed announced the closure of HuffPost Canada and HuffPost Québec as well as layoffs at HuffPost US.

We stand in solidarity with our colleagues. This is our statement. https://t.co/wouIiVfFTx pic.twitter.com/q4A0qPBeXA

The Buzzfeed News union also released a statement on Twitter and said it was particularly worrying to see Buzzfeed close the entire HuffPost Canada office less than a month after they unionized.

With files from CBC News, and The Canadian Press