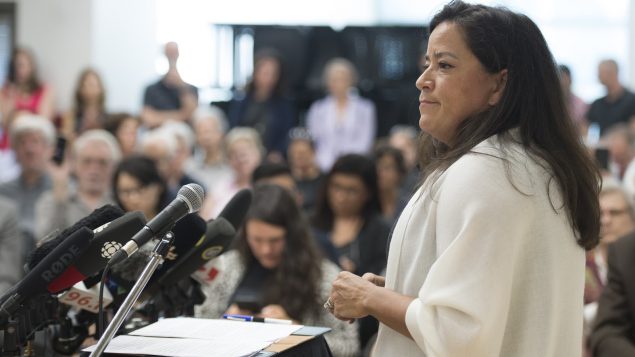 Jody Wilson-Raybould is publishing a political memoir called “Indian” in the Cabinet: Speaking Truth to Power. The book promises to shed new light on the most public moments of her time in government and go beyond the headlines. (THE CANADIAN PRESS/Jonathan Hayward)

Former cabinet minister Jody Wilson-Raybould is publishing a political memoir called “’Indian’ in the Cabinet: Speaking Truth to Power,” which promises to shed new light on the most public moments of her time in government and go beyond the headlines.

In a press release on Wednesday, HarperCollins Canada said that it had acquired the rights to the book and it is scheduled to go on sale on Oct. 12.

The book is the story of why Raybould got into federal politics, her experience as an Indigenous leader sitting around the cabinet table, as well as how she moved forward after the SNC-Lavalin scandal.

I am pleased to join @HarperCollinsCa in announcing the upcoming publication of my political memoir, “‘Indian’ In The Cabinet: Speaking Truth To Power.” 🙏🏽 📖

“Telling stories is integral to our Indigenous ways of sharing and learning. Growing up, I never imagined I would be a Member of Parliament and a Minister in the federal Cabinet,” Raybould said in a statement.

“My experience over the past five years has deepened my understanding of the challenges and opportunities we collectively face in governing this country, and has caused me to further reflect on what it means to be Indigenous in this country today.”

Raybould was a part of Prime Minister Justin Trudeau’s federal cabinet before resigning in 2019 after the controversy surrounding the SNC-Lavalin affair and how a potential criminal case and criminal charges against the company should have been handled.

She is now an independent member of parliament for Vancouver Granville.