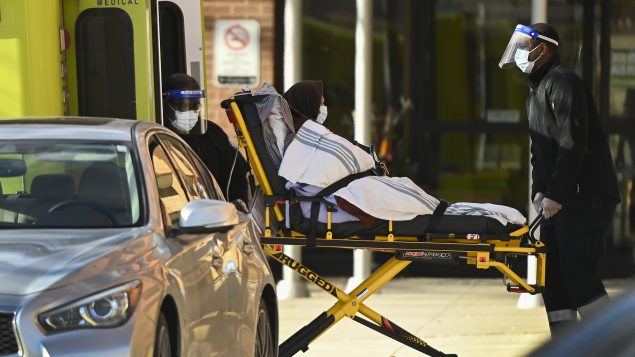 Paramedics take away a person from Revera Westside Long Term Care Home during the COVID-19 pandemic in Toronto on Dec. 7, 2020. A new report released by the Canadian Institute for Health Information found that the proportion of deaths in nursing homes represented 69 per cent of Canada's overall COVID-19 deaths, significantly higher than the international average of 41 per cent. (THE CANADIAN PRESS/Nathan Denette)

A new report finds that Canada had the worst record for COVID-19 deaths in long-term care homes last year compared to other wealthy countries.

The report, which was released Tuesday by the Canadian Institute for Health Information (CIHI), found that the proportion of deaths in nursing homes represented 69 per cent of Canada’s overall COVID-19 deaths–well above the international average of 41 per cent. 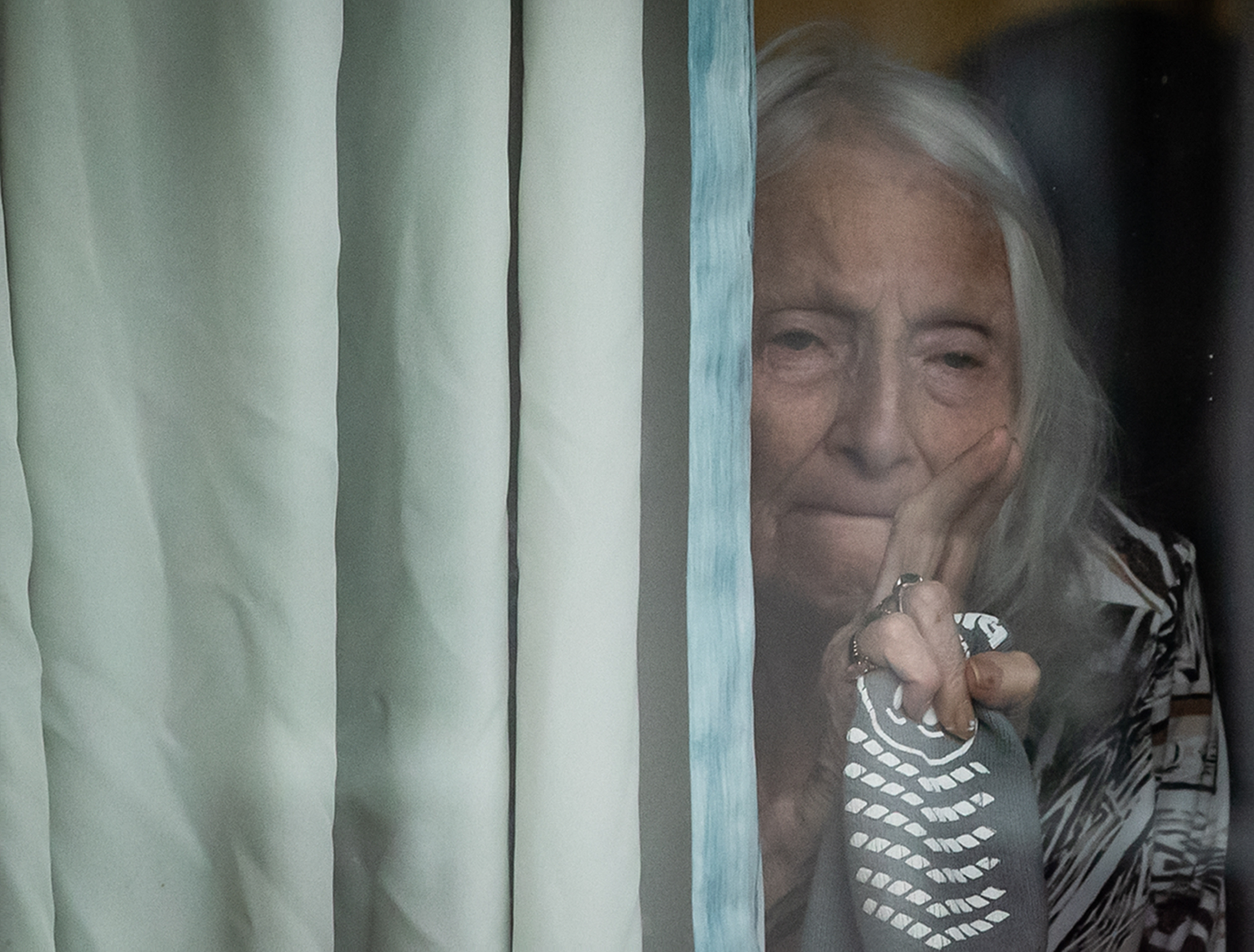 Elizabeth Jeppesen, 94, who tested positive for COVID-19, waves goodbye to her son John Welbers from a window in her room at Tabor Home, a long-term care facility in Abbotsford, B.C., on November 18, 2020. Residents who had no contact with friends or family were more likely to be assessed with depression — 36 per cent compared with 23 per cent for those who were in touch with loved ones during the first wave of the COVID-19 pandemic last year, according to a report released today. (THE CANADIAN PRESS/Darryl Dyck)

“COVID-19 has exacted a heavy price on Canada’s long-term care and retirement homes, resulting in a disproportionate number of outbreaks and deaths,” the report reads.

The study found residents in long-term care homes in several provinces received less medical care for everything from urinary tract infections to heart failure to lung disease during the pandemic’s first wave–between March 1 and Aug. 31–as the proportion of long-term care residents who received a visit from a physician of last year fell 16 per cent compared with that same period in 2019.

The report says that drop was seen in all five provinces where data were available — Ontario, Manitoba, Alberta, British Columbia and Newfoundland and Labrador–even when homes did not have an outbreak.

And it says there was a similar decrease in physician care orders for long-term care residents, suggesting that virtual visits from doctors did not replace in-person ones. 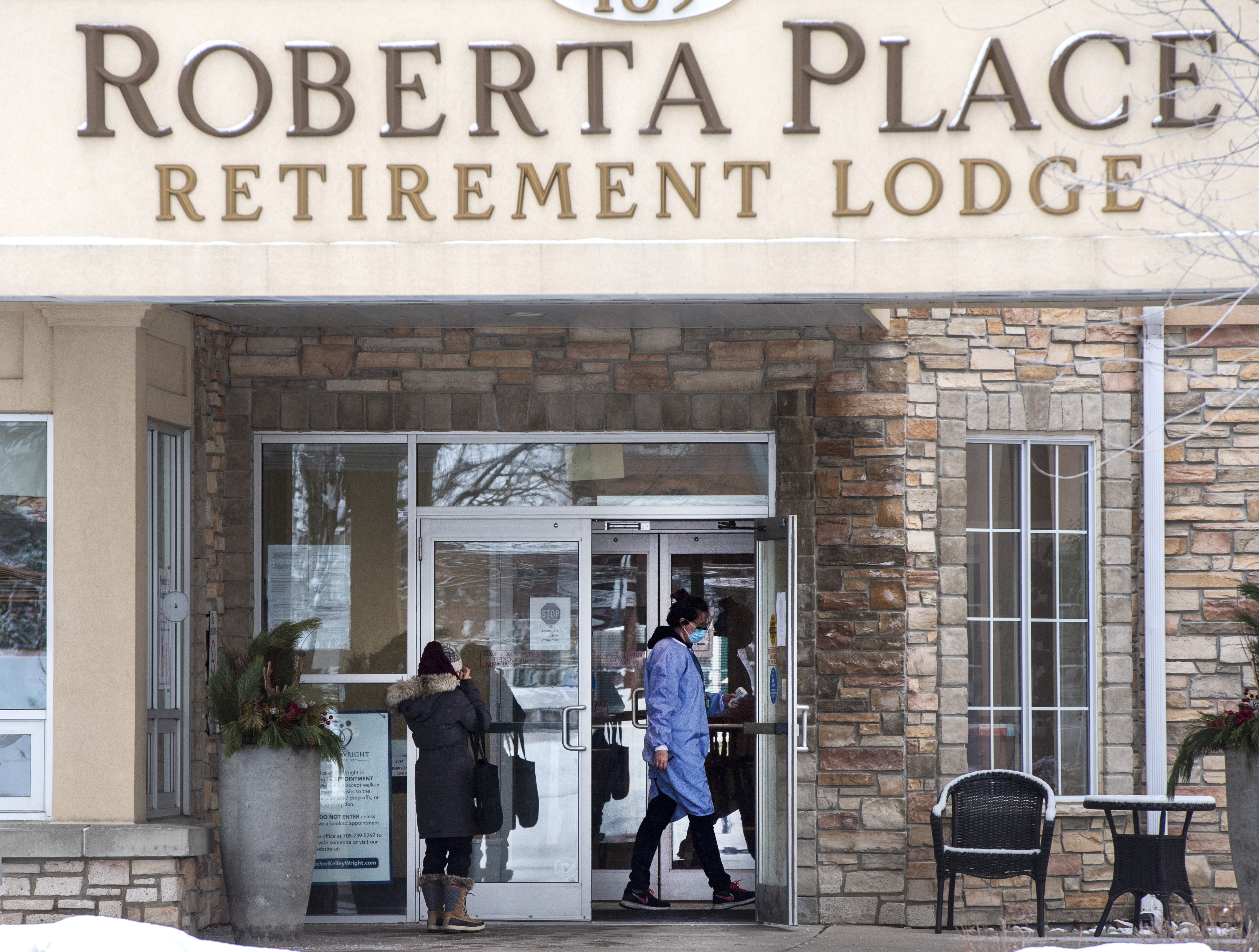 A visitor arrives at the Roberta Place Long Term Care home in Barrie, Ont. on January 18. (THE CANADIAN PRESS/Frank Gunn)

Residents also had less contact with family and friends during the first wave of the COVID-19 pandemic over the same period in 2019.

The study says 11 per cent of assessments during the first wave found the resident had not had any contact with friends or relatives over the previous week, even by phone or video — three times more than the same period in 2019.

Residents who had no contact with friends or family were more likely to be assessed with depression — 36 per cent compared with 23 per cent for those who were in touch with loved ones.

The study found the number of residents transferred to hospital for chronic medical conditions fell 27 per cent between March 1 and Aug. 31, compared with the same period in 2019.

And, according to a CBC News report by Julie Ireton published today, things got worse during the second wave.

The study, Ireton reports, found that the number of COVID-19 infections among nursing home residents increased by 62 per cent in the second wave compared with the first.

“It appears, Ireton writes, “that lessons learned in the first wave didn’t lead to changes in outcomes during the second wave last fall, which was ‘bigger and broader’ in Canada, resulting in ‘a larger number of outbreaks, infections and deaths.'” 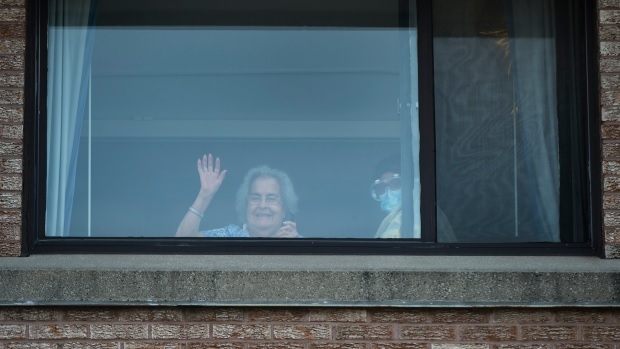 Alicia Tamayo, left, 95, waves to her daughter Betty Fernandez from her window at the Eatonville Care Centre on April 14, 2020. (THE CANADIAN PRESS/Nathan Denette)

Ireton notes that the researchers also looked beyond COVID-19 to all deaths that occurred in long-term care homes.

“Resident deaths — for all causes, not just from COVID-19 infection — increased by 19 per cent in British Columbia, Alberta, Manitoba, Ontario and Newfoundland and Labrador,” the study says. “There were 2,273 more deaths than the average in the five years prior to COVID-19, with the largest increase occurring in April 2020.”