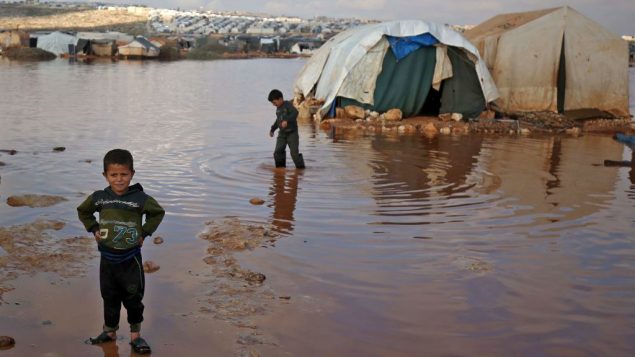 Syrian children play among flooded tents at a camp for displaced Syrians near the town of Kafr Lusin by the border with Turkey, in Syria's rebel-held northwestern province of Idlib on Jan. 19, 2021. (Aaref Watad/AFP via Getty Images)

The new funding will go towards providing nutritional assistance for communities affected by the war, as well as primary health care and sexual and reproductive health and rights services, Gould said during the virtual Brussels Fifth conference for Syria.

The announcement brings Canada’s humanitarian, development and stabilization support to Syria and the region to $3.3 billion since 2016, she added.

“After a decade of suffering, the Syrian people deserve the continued support of the international community. We must not lose focus,” Gould said in a statement. “Canada will support Syrian refugees, host communities and those who have been internally displaced.”

Gould also thanked Lebanon, Jordan and Iraq, as well as Turkey and Egypt, for hosting millions of Syrian refugees.

“Canada is committed to continuing its work with the international community and Syrians to put an end to the conflict through a sustainable political solution,” Gould said.

Canada’s new pledge comes as the United Nations is seeking to raise $10 billion US to address the needs of Syrians who depend on lifesaving humanitarian aid and livelihood support after a decade of war. This includes at least $4.2 billion for the humanitarian response inside Syria and $5.8 billion to support refugees and host communities in the region.

‘Hanging by a thread’ 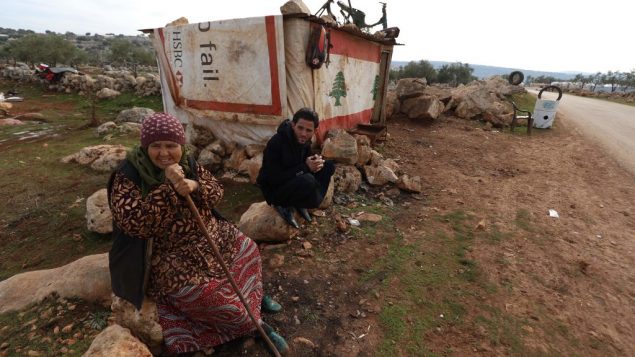 Displaced Syrian who gave his first name as Mahmud sits outside his makeshift tyre repair shop which he covered with a Lebanese flag following Beirut’s massive port blast last August, in the village of Kafr Uruq in the north of Syria’s rebel-held Idlib province on Dec. 28, 2020. (Abdulaziz Ketaz/AFP via Getty Images)

On Monday, the World Food Programme said it needs $600 million US this year to provide urgent food assistance to millions of Syrians who face the worst humanitarian conditions since the start of the conflict.

“Syrians are hanging by a thread and, while the world is transfixed by a global pandemic that is forcing everyone to look inwards, we must not forget the world’s weakest countries,” said Corinne Fleischer, WFP regional director for the Middle East and North Africa.

“We are grateful for the support of our donors over the years. Their contributions have saved lives. But the Syrian people need their support more than ever before.”

According to UN estimates, nearly 24 million people need humanitarian or other forms of assistance in Syria and in neighbouring countries. That is four million more than in 2020, and more than at any other time since the conflict began, UN officials said Monday ahead of the funding conference.

“There is less fighting, but no peace dividend. More people need more help than at any point during the war, and children must return to learning.”

UN High Commissioner for Refugees Filippo Grandi said after a decade of exile, refugees’ hardship has been compounded by the crushing impact of the COVID-19 pandemic.

“Refugees and their hosts must get nothing less than our unfaltering commitment, solidarity and support,” Grandi said. “A failure to do so will be catastrophic for the people and the region.”

Julie Marshall, a spokesperson for the WFP in Canada, said the UN food agency’s partnership with Canada is vital in sustaining and planning programs in Syria and the region.

The ongoing partnership with Canada is vital in sustaining and planning WFP’s programmes in Syria and the region, including school feeding programs that supported 750,000 children each month and provided income for vulnerable women over the last two years, she added.

“This contribution of $5 million for inside Syria and $5 million for the region will help support almost all aspects of WFP’s key programmes, including general food assistance for people in food insecure settings, providing school meals and snacks for children to enhance their learning, malnutrition support to pregnant and lactating mothers,” Marshall said.