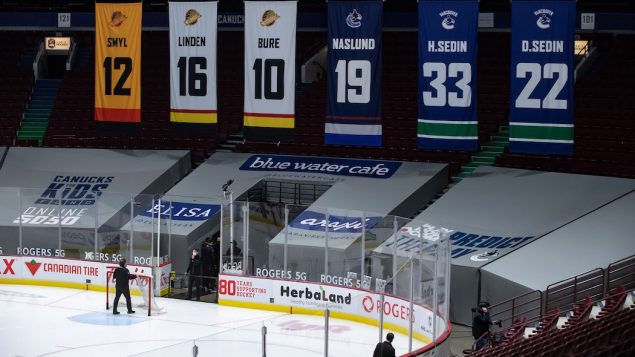 An arena worker removes the net from the ice after the Vancouver Canucks and Calgary Flames NHL hockey game was postponed due to a positive COVID-19 test result, in Vancouver, on Wednesday, March 31, 2021. (The Canadian Press/Darryl Dyck)

The Vancouver Canucks confirmed on Wednesday that 25 individuals have tested positive for the COVID-19 virus and that the source of the infection is confirmed to be a variant.

A full genome sequencing by the British Columbia Centre for Disease Control is going to be required to determine the type of variant.

The statement added that an ongoing investigation by Vancouver Coastal Health and club contact tracing staff attributed the source of the infection to a single individual who obtained it in a community setting. The rapid spread of the infection throughout the team indicated a link between contacts and the primary case.

“The health and safety of players, staff, families and the greater community remains the utmost priority,” Bovard and Douglas said. “The Canucks are grateful for the continued support of local public health officials, the [National Hockey League] and [National Hockey League Players Association] and encourage everyone to help prevent the spread of COVID-19 by following health orders.”

“COVID-19 infections are rising in BC. This is a stark reminder of how quickly the virus can spread and its serious impact, even among healthy, young athletes,” he added.

As of today, 25 individuals have tested positive and the source infection is confirmed a variant – full genome sequencing by BCCDC will be required to determine which specific type.

On March 31, the NHL had announced that two Canuck players and a member of the coaching staff was added to the league’s COVID protocol list and postponed the team’s next four games. 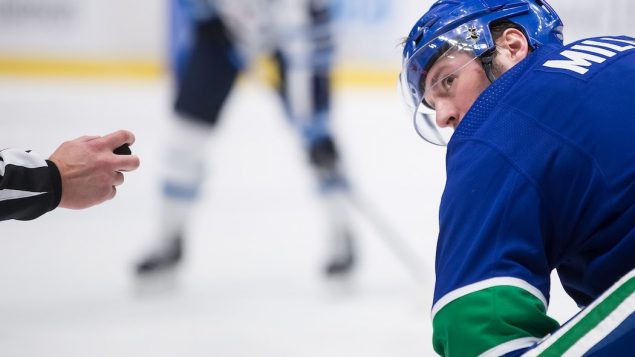 Vancouver Canucks’ J.T. Miller lines up for a faceoff against the Winnipeg Jets during the third period of an NHL hockey game in Vancouver, in March 2021. (The Canadian Press/Darryl Dyck)

The Canucks are scheduled to play against the Calgary Flames tonight, however the team’s website said that tonight’s game as well as Saturday’s game is postponed.

The Canucks still have 19 games left to play this season and they currently sit eight points out of a playoff spot.

This instant is not the first time a Canadian team has been affected by the COVID-19 virus. Just last month, the Montreal Canadiens were forced to postpone four games when two of their players were added to the NHL’s COVID protocol list. It was the first time a game in the all Canadian North division had been postponed because of the virus.

The NHL season was supposed to end on May 8, but the league decided to extend the season to May 11 due to games that were previously postponed.