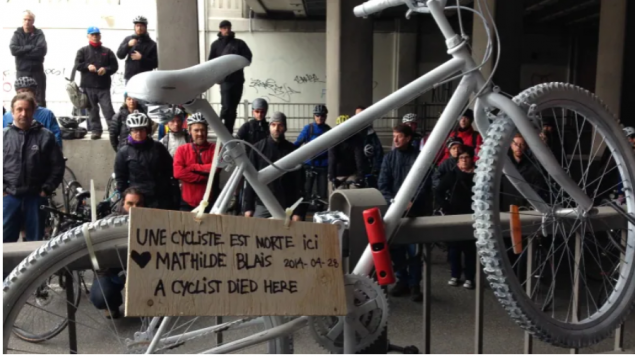 In 2014, a bike painted white was placed at the dangerous underpass where cyclist Mathilde Blais was killed when struck by a crane truck. (Salimah Shivji/CBC)

It has become a practice in Montreal, to mark the spot where cyclists have died in road accidents with bicycles painted white. Now, for the first time, one such “ghost bike” will be removed to the Musée de la civilisation, a museum in Quebec City.

People in the province of Quebec were early and enthusiastic promoters of cycling. As a result of their vigorous lobbying, the provincial government adopted a bicycle policy that included paving the shoulders of provincial roads and creating a network of bicycle paths across the province. It also supported municipalities ‘ efforts to develop bike paths and amended the Highway Safety Code to increase safety for cyclists. Cycling has become ever more popular.

However, accidents happen and, starting with a cyclist’s death in 2013, ghost bikes have been left at a total of 11 sites in the Greater Montreal area. 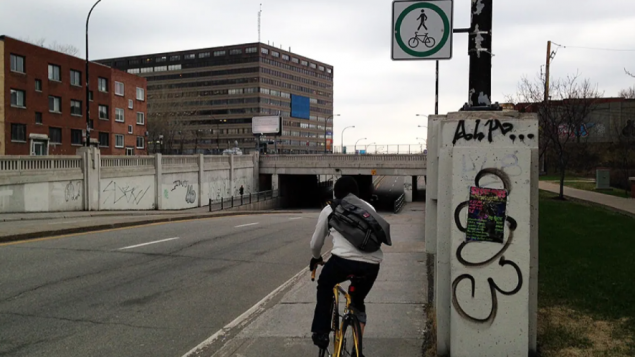 Mathilde Blais used this underpass to get to work but was afraid that it was dangerous. There had been signs telling cyclists to not use the sidewalks. After she died, the signs were removed and later, new infrastructure was put in place to protect cyclists. (Jay Turnbull/CBC)

Dangerous underpass has been modified

In 2014, a ghost bike was placed at a notoriously dangerous underpass in Montreal to mark the death of 33-year-old Mathilde Blais. Pressure mounted to make that roadway safer for cyclists. Now, new infrastructure has been put in place. The ghost bike will be moved and a commemorative plaque will replace it with a stated goal of reminding people “that road and street safety, for the most vulnerable users, must be a priority.”

There will be a ceremony on May 2, 2021 and a measure of how seriously the issue has become is highlighted by who will attend. There will be a government minister and member of Parliament for the riding, the mayor of Montreal, an opposition member of Quebec’s National Assembly, the museum’s CEO and the head of Quebec’s premier cycling association, Velo Quebec.

‘A sober and meaningful marker’

In agreeing to display the ghost bike, the museum’s president and CEO Stéphan La Roche said: “Like all the objects in our collections, this ghost bicycle illustrates the evolution of our society. As part of the grieving process, ghost bicycle(s) are a sober and meaningful marker of both a loved one’s absence and the context of their passing. They are also strong artistic forms of expression that aim to unite and mobilize people. This mobilization succeeded in informing public authorities of a serious urban safety problem and led to its resolution. As such, this white bike marking Mathilde Blais’ death will forever remain a symbol of progress for cyclist safety. Such a deeply meaningful object absolutely had to be preserved in the collective memory and that is exactly what the Musée de la civilization does.”