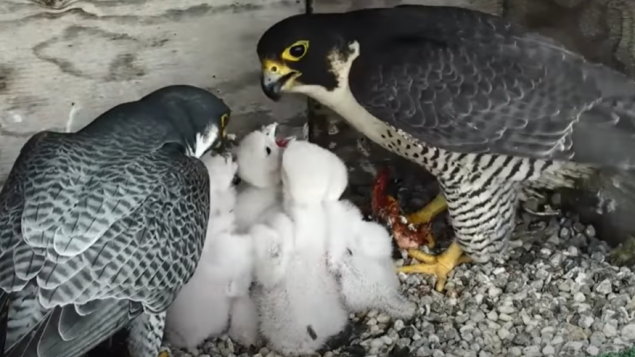 This was the kind of image fans used to see from a camera on a university building in Montreal. (YouTube)

Until 2021, enthusiastic people from around the world watched live images from a peregrine falcon’s nest on a university building in Montreal transmitted over the internet. But this year, the falcon has left the nest and taken over an abandoned raven’s nest on the landmark St. Joseph’s Oratory. Administrators of the oratory have not answered queries as to whether they might consider installing a camera there. Fans will be disappointed that they can no longer see the falcon images online. 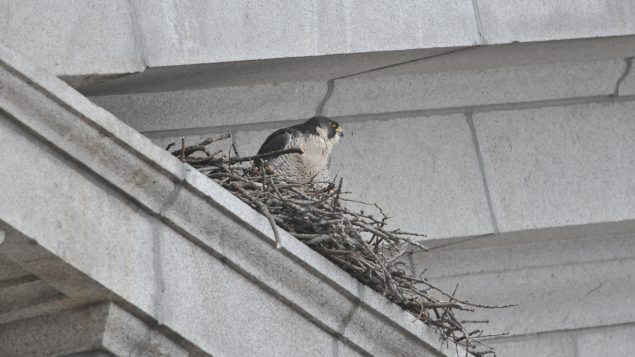 The peregrine falcon that used to nest at the Université de Montréal has now chosen to lay her eggs in an abandoned raven’s nest where there is no live camera to capture images of her and her family. (Eve Bélisle)

In the 1970s, peregrine falcons had disappeared from eastern North America after use of the insecticide DDT weakened their eggshells and populations were decimated. DDT was banned in 1972. In the late 1970s and 1980s, scientists at the MacDonald Raptor Research Centre of McGill University released about 50 peregine falcons on Montreal Island in hopes they would imprint on city habitat. On his own, a young man built a tray to accommodate a nest and placed it on a downtown building and, in 1982, a pair made it their home. Lawyer Jean Masson of the Martineau, Walker law firm took an interest. He got the firm to donate some money and facilitated access to the Place Victoria building. A camera was set up and a large television screen was placed in the lobby so people could watch activity in the nest. 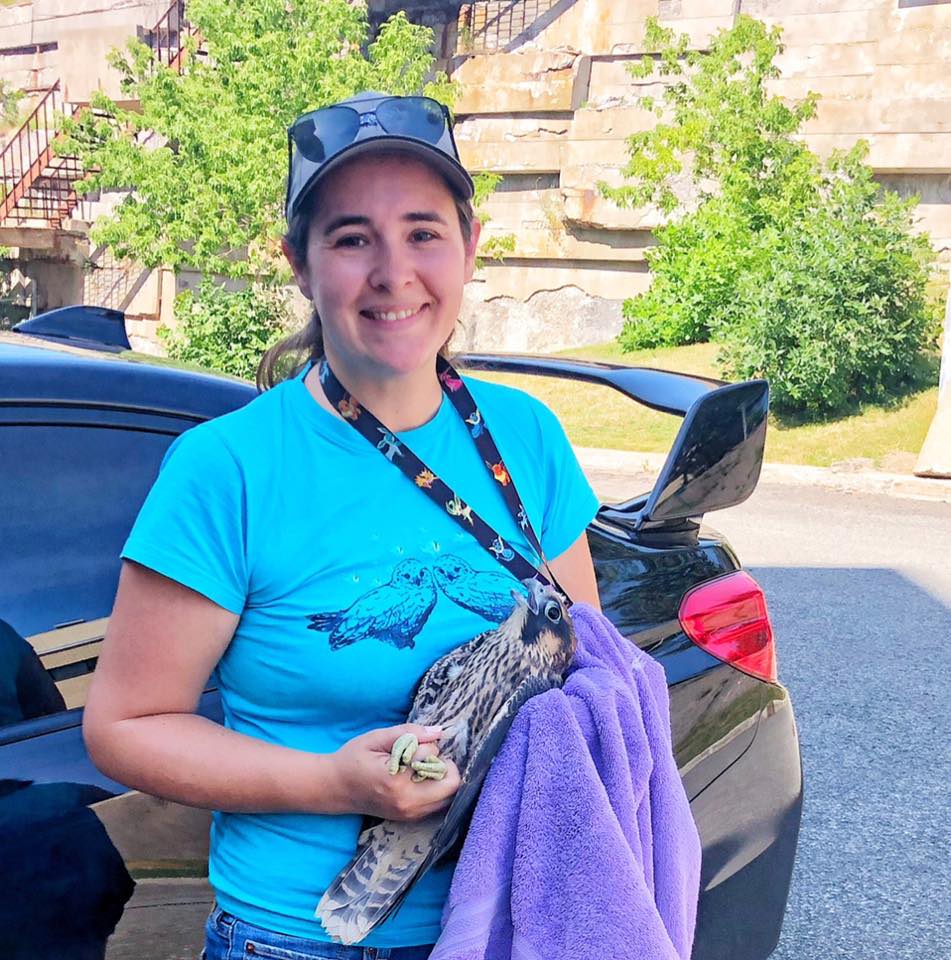 Eve Bélisle and other volunteers became fascinated with peregrine falcons as their return to Montreal increased. (Eve Bélisle)

Eve Bélisle was interested in birds and, as an employee of the Université de Montréal, was fascinated to learn in 2007 that a peregrine falcon was nesting on one of the university buildings. By 2010, she and other volunteers had a camera installed to monitor the birds. In later years, high-definition images were shared on the internet attracting fans from as far away as Australia and Europe. People in France were especially interested given that commentary was provided in French, which is one of Canada’s official languages along with English.

A banded falcon which was named Spirit inhabited the nest year after year until 2017. As Bélisle tells it, there was a “vicious fight” with another female falcon in 2017 which Spirit lost. She abandoned the nest and was later found “almost dead” and taken to a bird rehabilitation centre. After four months, Spirit made a miraculous recovery, was released but disappeared. 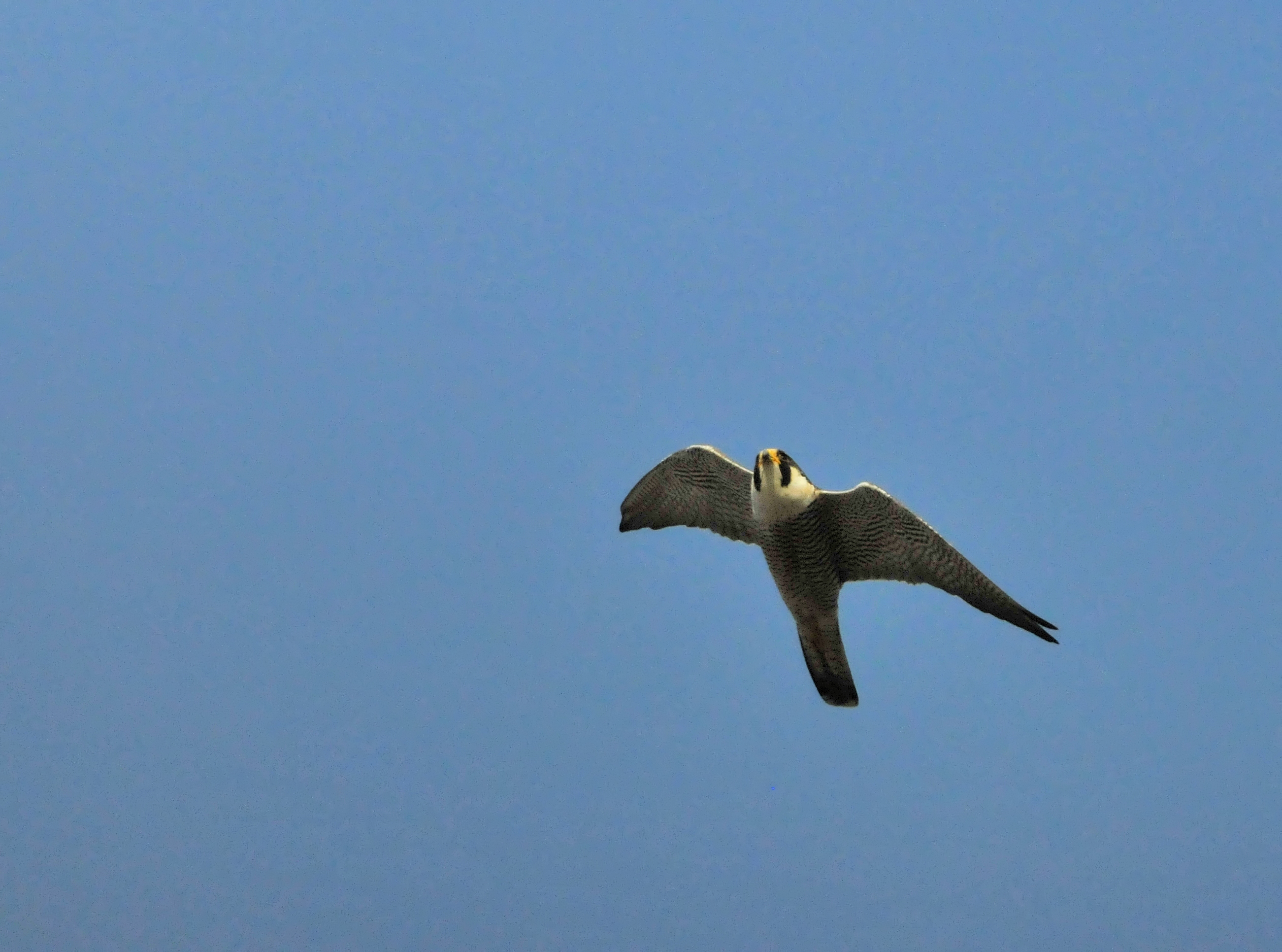 From its home on one of Montreal’s many bridges, this peregrine falcon may dive for prey at a speed of 350 km/hour. (Eve Bélisle)

A dozen pairs of peregrine falcons now nest in Montreal. The city provides them with the food they primarily eat which is other birds. The city has many pigeons and is on a bird migration route surrounded by water, providing plenty of prey and opportunity to catch it. Peregrine falcons have set up nests on several bridges around the island of Montreal and on some tall buildings and churches. These falcons are the fastest creatures on Earth. To catch their prey they may dive at a speed of 350 km/hour.

Bélisle regrets the loss of the falcons at her university’s building and the ability for fans to see them. She says the live images helped raise awareness about the peregrine falcons and birds in general. It also helped raise funds for the bird rehabilitation centre which only operates on donations.

However, peregrine falcons often alternate nesting sites, possibly in order to let microbes vacate the nests. So, she hopes they will return next year and that the camera can resume transmitting images to eager fans around the world.