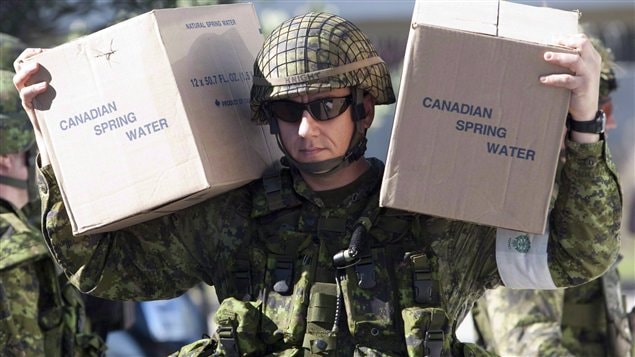 A platoon of Canadian soldiers are about to take part in the United Nations peacekeeping operation in Haiti, alongside their Brazilian colleagues.

Thirty-four Canadian soldiers from the Royal 22e Regiment, based in Valcartier, Que, have been embedded with Brazil’s 44th Motorized Infantry battalion since April.

While Canadian soldiers are used to operating alongside their NATO allies, the deployment alongside Brazilian troops, which make up the largest contingent of UN peacekeepers in Haiti, is rather unusual.

The Canadian Press reports the United Nations only signed off within the last week on the request to add Canada to the UN contingent.

Also surprising is the fact that the deployment of Canadian peacekeepers to Haiti, which starts on June 21 and will last until December, had been kept very hush-hush.

The fact the government did not promote the peacekeeping deployment – arguably a good news story amid a blizzard of bad news for the Conservative government of Prime Minister Stephen Harper – has left some defence observers scratching their heads.

“I find it surprising Canada wouldn’t be more forthright ahead of time about this positive development,” Walter Dorn, an expert on peacekeeping at the Royal Military College told the Canadian Press. “It helps Haiti. It helps the United Nations, the United States and Brazil.”

The platoon of Canadian soldiers will complement Canada’s military contribution to the UN peacekeeping force in Haiti, known under its French acronym MINUSTAH. There are five Canadian military staff officers already deployed to Haiti and about 90 police officers serving with the UN in Haiti.

There are 6,443 international troops in Haiti and an additional 2,661 police officers conducting training under the United Nations flag.