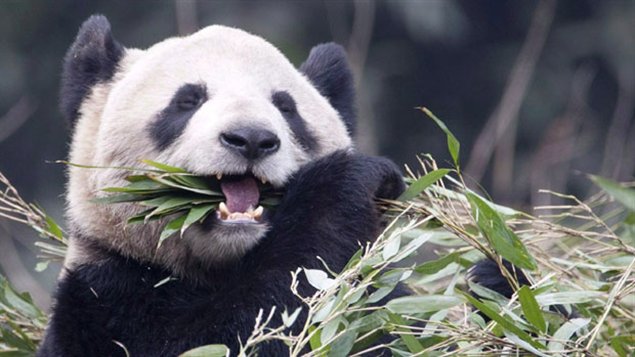 The biogas plant will use 3,000 tonnes of manure, the equivalent of what 15 pandas produce annually.
Photo Credit: Adrian Wyld/The Canadian Press

Rhinos, pandas and many other animals from the Toronto Zoo will soon be contributing in their own special way to Ontario’s power supply. A new biogas plant to be built on zoo grounds in 2014 will combine 3,000 tonnes of manure and 14,000 tonnes of grocery waste to produce electricity, heat and fertilizer.

The waste mixture will be placed in an anaerobic digestion chamber where millions of bacteria will slowly break it down.

“This works basically like a concrete stomach”, says Daniel Bida, executive director of ZooShare, a non-profit renewable energy co-operative responsible for the project. “We take waste and we make energy out of it, and what’s left over in the end is a high-quality fertilizer product.”

The 500 kW plant will generate enough electricity for 250 homes per year. ZooShare Biogas Co-operative has recently signed a 20-year contract with the Ontario Power Authority.

Furthermore, emission reductions from the plant will be the equivalent of removing 2,100 cars off the road each year, says Bida.

From poo to power to profits

The plant, which will cost $ 5.4 million to build, will be completely financed through the sale of community bonds. ZooShare currently has over 120 co-operative members who have invested $460,000 so far. The bonds pay a 7% annual return.

Bida sees the project is something positive for the Toronto Zoo.

“They are already one of the leading conservation organizations in the world… We’re really excited to be working with them on this project,” he says.

ZooShare now has plans to expand the biogas plant concept to other zoos across North America.

Daniel Bida, executive director of ZooShare, talks to Gilda Salomone about the new biogas plant that will be built at the Toronto Zoo.