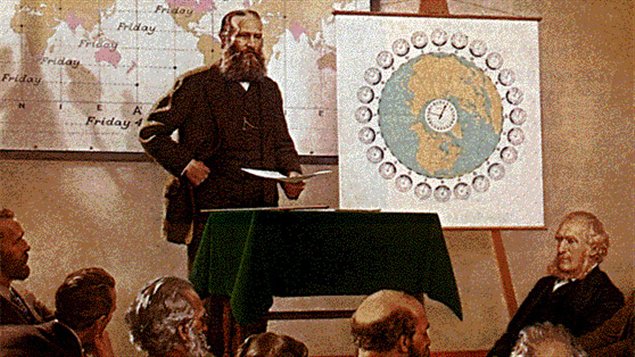 At a Toronto meeting in 1879, Sandford Fleming proposes international Greenwich time, dividing the world into 24- one hour zones. starting at the Greenwich meridian.

Anniversary of the adoption of Standard time zones.

At midnight November 18, 1883 the idea of the world’s standard time began in the province of Nova Scotia and the eastern seaboard of the US. This became known as the Atlantic time zone.

Scottish born Sir Sanford Fleming, who was Canada’s foremost railway construction engineer, as well as a scientist and inventor, had developed and proposed a way to end the chaos and confusion of operating railways with the incredible variety of local “solar” times throughout North America which clashed with railway times.

Trains would sometimes collide due to conflicts in timing as they left from communities having their own version of what the time was.

In the 1870’s as Chief Engineer of the Canadian Pacific Railway, and surveying a route across Canada, he became aware of the challenges of scheduling long distances trains. this combined with a missed  train in 1876 due a mix up over AM and PM times led to his invention of standard time.

He  proposed an international clock of 24 hours based on the Greenwich Meridian, and divided the world into various times zones.

North America would be divided into four zones.

With the concept working with railways in Canada and the United States, other world nations will endorse the Canadian engineer’s idea at his  International Prime Meridian Conference in Washington in 1884.  Originally proposed as Standard Meridian Time, it is known today as Greenwich Mean Time (GMT), or Coordinated Universal Time (UTC).

It came into effect in 1885, and the concept remains relatively unchanged to this day, although Canada now has five and a half zones,

NEWFOUNDLAND time is one half-hour ahead of ATLANTIC time- (Labrador, Nova Scotia,New Brunswick, PEI) , followed by EASTERN- (Ontario Quebec, and half of Nunavut), CENTRAL- (Manitoba,Saskatchewan, central Nunavut), MOUNTAIN-(Alberta, western Nunavut, NWT) and PACIFIC- (BC and Yukon)