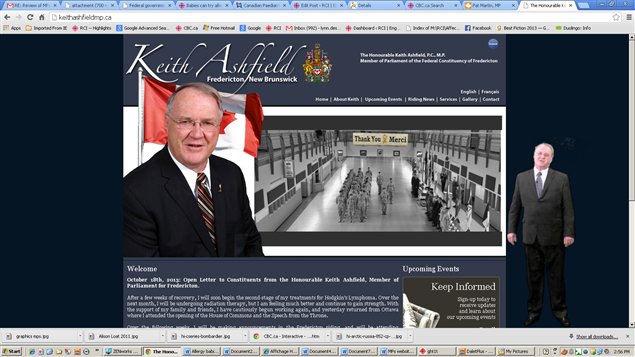 The website for MP Keith Ashfield was one of the few given top marks by Samara.
Photo Credit: keithashfieldmp.ca

Most politicians’ websites fail to engage:charity

Most Canadian members of Parliament fail to use their websites to get citizens to engage with politics or share their views, says the charitable think tank Samara. The group is dedicated to improving political participation in Canada.

“We know there has been a real declining interest in politics among Canadians,” says Alison Loat, Samara’s executive director. “Increasingly, Canadians feel as though their elected leaders don’t represent them and don’t speak for them.”

People around the world fight for democracy, she points out, and Canadians take it for granted. Loat says part of the responsibility belongs to citizens who need to get involved, but the other belongs to politicians who could easily use their websites to improve citizen engagement.

Websites for MPs are funded by taxpayers’ dollars and Samara will be sending them all a checklist of easy things to improve the sites. Among them, Samara suggests simple things like making sure to publish the operating hours of their constituency offices. Loat says MPs should do a better job of explaining what they do in Parliament and how that is relevant locally.

“Canada is a huge country and so Ottawa, the capital, can feel very far away,” says Loat. “So I think it really behooves the MP to do a bit of that translating between Ottawa and …the local regions.”

They could share links to their national parties, she suggests, offer a newsletter and space for comments, and they could profile their teams so constituents know who they are speaking with if they should call.