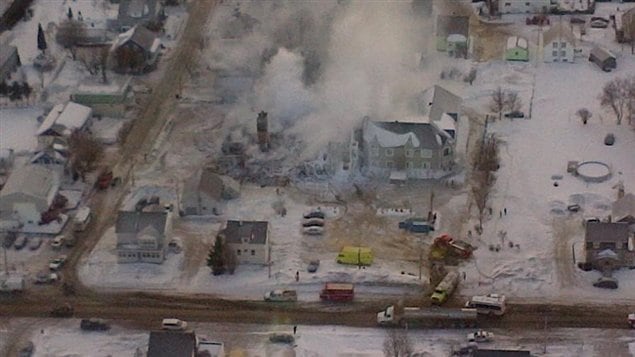 An aerial police photo shows the burned remnants of a seniors' residence that was only partly equipped with a water sprinkler system. It's feared many, if not most residents, perished in the January 23, 2014 fire.
Photo Credit: Sûreté du Québec

Seniors’ residence fire – Are seniors put at risk because of sprinkler costs?

The Queen has sent condolences and many politicians are expressing their sympathies after a fire that killed numerous people in a seniors’ residence, but seniors’ advocacy activist Susan Eng says governments continue to allow owners of residences to save money, rather than impose basic safety measures such a water sprinkler system.

“How many more people have to die?” says Eng, the Vice President, Advocacy, of CARP, a not for profit organization in Canada. “To some extent, somebody made a calculation…the cost of a sprinkler system, the cost of night staff, the cost of people who have two years to go…That’s where we’re going with this…We have to change that calculation.”

The fire broke out shortly after midnight on Thursday morning (January 23) in a seniors’ residence in the municipality of L’Isle-Verte in the Canadian province of Quebec. About 52 seniors, only five of whom were fully autonomous, are believed to have been in the building which burned down in the portion that did not have a sprinkler system.

Authorities are now retrieving the bodies from the ruins of the residence. It appears only a few survived.

RCI’s Wojtek Gwiazda spoke to CARP’s Susan Eng about the kind of regulations that exist in Canada for seniors’ residences and the kind of decisions that are made by those who run them.