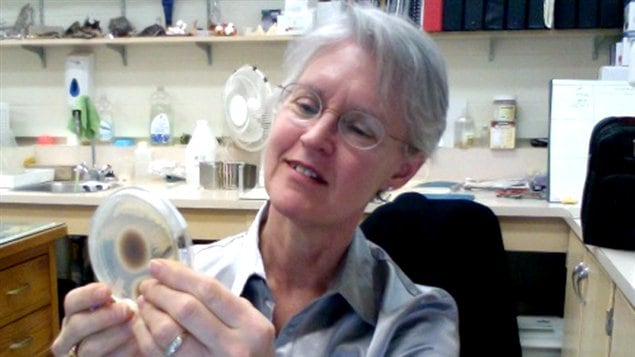 Newly developed Canadian research could soon help physicians combat dangerous fungal infections.  It also can identify the likely path of resistance mutations a fungus will develop in response to a drug and so aid in development of new drugs to fight it.

The research was published in the journal Eukaryotic Cell, (see link below) and was funded by the Natural Sciences and Engineering Research Council of Canada.

Professor Susan Kaminskyj is a biology professor at the University of Saskatchewan and leader of the research team.
Listen

It may seem strange, but there aren’t many drugs available to fight fungal infections.

In the past several decades only about 24 antifungals in four major types have been developed.

Professor Kaminskyj explained that the latest class of antifungal drugs was released in 2005 and resistant strains of fungi showed up in less than a year.

One reason is that the drugs used to fight the skin fungi are too toxic to be used internally.

It is systemic and internal infections, which puts people most at risk, and most often people with compromised immune systems, such as HIV patients, or the elderly or those who have had surgery.

She notes that systemic fungal infections are incurable >70% of the time even with aggressive drug therapy.

Fungi, like bacteria, can mutate fairly quickly to become resistant to the drugs. “So resistance is inevitable” says professor Kaminskyj

The new research has led to the ability to identify the mutations of a fungus in reaction to a drug and follow the mutations as resistance builds. Additional parallel research also identified  a previously unknown gene involved in Aspergillus cell wall synthesis.  The ability to block or hinder cell-wall development is an important aspect in fighting fungal growth.

This could help pharmaceutical companies to work with the lab developed mutations and so develop drugs which would be ready to use in the event of a resistance to an existing treatment.