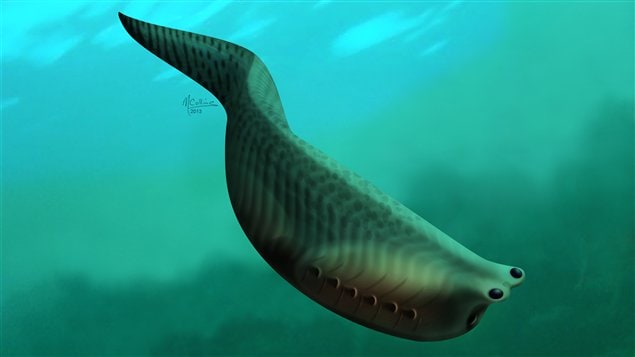 Artist's rendition of what the primitive fish, Metaspriggina would have looked like.
Photo Credit: Drawing by: Marianne Collins© Conway Morris and Caron

Newly-found fossil remains of a tiny tropical fish give a new perspective on the evolution of early vertebrates and eventually, dinosaurs, mammals and other creatures that have a backbone and jaw.  The Metaspriggina dates back 505 million years ago, that’s 250 million years before the dinosaurs.

These fossils were found in the Canadian Rocky Mountains in Kootenay National Park in western Canada. “It’s a very significant animal that really tells us about our roots and the deep origins of the vertebrate back in time,” says Jean-Bernard Caron, a paleontologist with the Royal Ontario Museum and leader of the team that found the fossils.

A ‘mother lode’ of fossils

A rich “mother lode” of fossils was found in 2012 near Marble Canyon in an area that was covered by a sea in Cambrian times. “Many of these animals were soft-bodied, in fact the majority of them, and they were trapped by mud flow events at the time that will have travelled very quickly at the bottom of the ocean, covering and smothering all these animals pretty much in place, where they lived. So the fine mud sediment will have had probably a role in preserving the animals,” says Caron.

Fish had no bones

Metaspriggina was only as big as a thumb. It had a small, flat head with large eyes. Although it had no bones it had a skull possibly of cartilage and small structures which were precursors to vertebrae. It also had a rod of flexible tissue called a notochord. The mouth was below and behind the eyes and led to a large cavity lined with seven pairs of gill bars which would have filtered food and helped the fish breathe.  It’s believed the first of them would have evolved into jaws.

Caron and his team will return to the dig for 10 weeks this summer. They want to try to find out how old their fish was, whether it was a juvenile and whether it had fins.  For now they have found no fossils of fins.

Working at the site is a challenge. It is 2,000 metres above sea level, the weather can change so fast that Caron says you can experience four seasons in one day. And there is the issue of wildlife, although Caron says Parks Canada staff have been very helpful in telling them when and where it is safe to go.