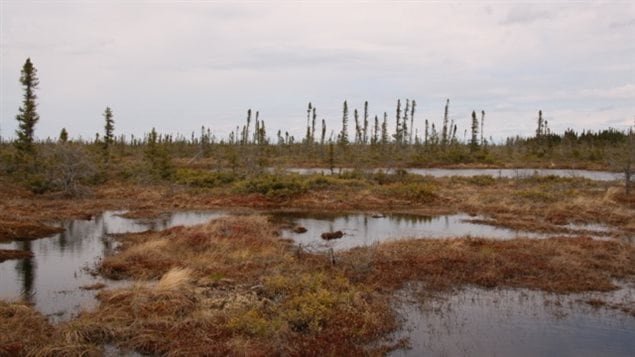 Wetlands in northern Canada store water and much of the world’s carbon, but will change profoundly in warmer temperatures, studies show.
Photo Credit: B. Branfireun

An innovative experiment indicates climate change will dramatically change the plants that dominate Canada’s vast northern wetlands, and that may cause a massive release of carbon dioxide, possibly increasing the effects of climate change. Scientists have predicted this before, but researchers from Western University in Ontario have used a different method and come to the same conclusion.

They collected about one metric ton of peatland. “A peatland is a kind of wetland that accumulates a lot of carbon as organic matter,” says Prof. Brian Branfireun, one of the scientists involved in the study. “So there’s a thick soil layer sometimes two, three, four meters thick of accumulated organic matter that has been stored there since the last glaciation, so anywhere from 6-10,000 years ago.”

The soil samples were collected into 5-gallon pails to each constitute a “mini-wetland.” They were brought back to Western University’s special facility called the Biotron Experimental Climate Change Research Centre in London, Ontario. They were then individually subjected to varying increases in temperature, carbon dioxide and moisture to mimic future climate conditions.

What the scientists found was that sphagnum, or “peat” moss which usually dominates the landscape suffered a precipitous decline as temperatures increased, and sedges, a plant that resembles grass, took over. The loss of carbon-storing moss was a worrisome change for Branfireun and the rest of the team.

“Our concern is that we may, in fact, see a weaker carbon storage potential in the north or possible even a switch to a carbon source to the atmosphere,” says Branfireun. “Increased decomposition, which we also observed, could result in a release of more carbon dioxide from this vast store of carbon that we have in the northern soils. And that’s really concerning to us because that could lead to an amplification of climate change by increasing the amount of carbon dioxide in the atmosphere…the climate change we’re seeing now could further accelerate.”

The scientists next want to go back to the wetlands to test their findings on site. To simulate climate change, they plan to set up structures above the ground to control carbon dioxide and insert heating rods into the ground to simulate higher temperatures.

The study is part of the doctoral research program of Catherine Dieleman, a PhD candidate and lead author of the study. She was supervised by Branfireun and Prof. Zoe Lindo. It was released in the journal Global Change Biology.