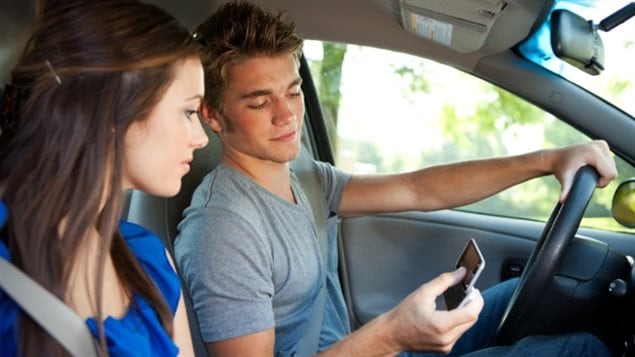 A new survey shows that almost half of Grade 12 students in Ontario have texted while driving.
Photo Credit: CBC

Everybody, please note. “Texting While Driving” is not the name of an up-and-coming rock group.

Rather, it is a phenomenon that–to say the least–appears to be very widespread in Canada among young people.

According to the 2013 Ontario Student Drug Use and Health Survey, a biannual study conducted for the Centre for Addiction and Mental Health in Toronto, more than one-third of all licensed drivers in Grades 10-to-12 in Ontario admit to having texted while driving.

That percentage increases to 46 per cent of licensed students in Grade 12.

A bit of perspective may be needed here.

A Harvard Center for Risk analysis found that texting in cars and trucks causes over 3,000 deaths and 330,000 injuries a year in the United States.

The U.S. National Highway Traffic Safety Administration has found that driving a vehicle while texting is six times more dangerous than driving while intoxicated

The federal agency reports that sending or receiving a text takes a driver’s eyes from the road for an average of 4.6 seconds, the equivalent — when traveling at 55 mph — of driving the length of an entire football field while blindfolded.

Fortunately, the problem has not escaped the politicians, at least in Ontario.

After the results of the survey were released this week, Premier Kathleen Wynne said her recently re-elected government will bring back legislation that would toughen penalties and add demerit points for distracted driving.

The premier pointed out there are now more deaths as a result of texting while driving than drunk driving.

The previous bill — which would impose three demerit points in addition to increasing the maximum fine for distracted driving to $1,000–died when the June 12th election was called.

For some perspective on the survey, RCI’s Terry Haig spoke by phone with Dr. Robert Mann at his office in Toronto. He is a senior scientist at the Centre for Addiction and Mental Health in Toronto.