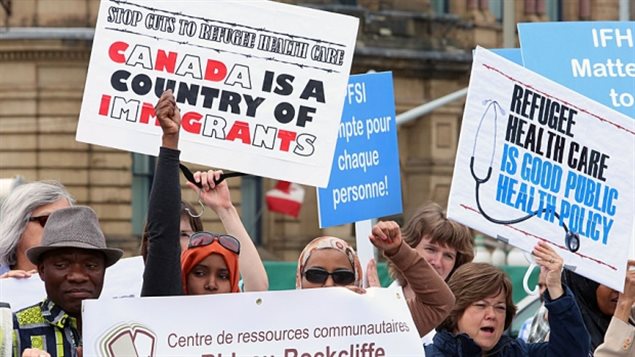 Federal cuts to refugee health care have provoked protests across the country. The cuts target 'bogus' claimants, but Immigration and Refugee Board figures show legitimate refugees are getting caught in the net.
Photo Credit: CBC

Many refugees branded as “bogus” are accepted

In justifying its controversial cut in health care benefits for some refugee claimants, the current Canadian government has frequently called them “bogus refugees” when, in fact, many of them have been later approved by the Immigration and Refugee Board.

The government ended health benefits for asylum seekers from what it deemed to be “safe countries” in 2012 and it reduced benefits for other claimants. Doctors and refugee advocates have protested the cuts, and a court recently called them “cruel and unusual treatment” which “shocks the conscience and outrages Canadian standards of decency.”

While the government calls refugee claimants from itslist of “safe countries” bogus, in fact, figures from the Immigration and Refugee Board show it has approved many of them from listed countries like the U.S., Belgium, Germany, France, Sweden, Mexico, Hungary and others.

‘Attempt to obfuscate and confuse’

“The fact that some of these claimants from the so-called safe countries are ultimately accepted clearly contradicts the statements that the refugees from those countries are ‘bogus,'” said Lorne Waldman, a lawyer who challenged the cuts to refugee health care in court. “To label claimants as ‘bogus’ is completely misleading and there is no basis to do so. It is just an attempt to obfuscate and confuse.”

Alexis Pavlich, spokeswoman for Immigration Minister Chris Alexander, said refugee reforms that include restricting health care means more protection for those in need and faster removal of those who don’t.