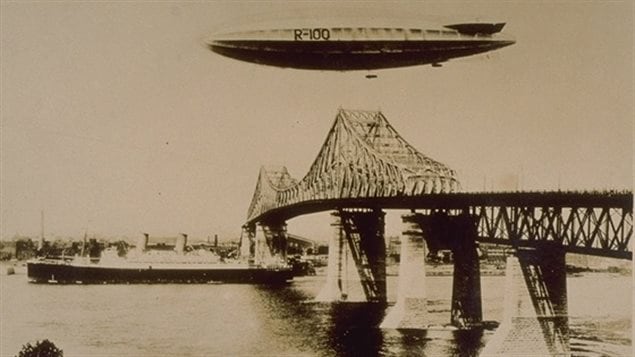 The day the R-100 came floating over Canadian skies

It was probably akin to having the space shuttle drop in the city.

Aug 1930: The British R-100 over the Canadian Bank of Commerce building in Toronto. At the time it was the tallest building in the British Empire. (CIty of Toronto Archives Fonds 16, Ser 71,# 7921) CLICK to ENLARGE.

For Canadians in eastern Canada and especially Montreal, on August 1, 1930, the sight of the enormous British Airship R-100 floating slowly past before mooring to the special mast near Montreal, was simply amazing.

The airship had made a transatlantic crossing in an astounding time of under 79 hours.  With a crew of 32 and carrying 6 passengers, it was the first passenger carrying flight from England to Canada.

The R-100 stayed at St Hubert, south of Montreal for 10 days during which time some one million people visited the area to view the giant ship.

When the sister ship R-101 crashed in France in October 1930, the R-100 was grounded and then sold for scrap the following year.