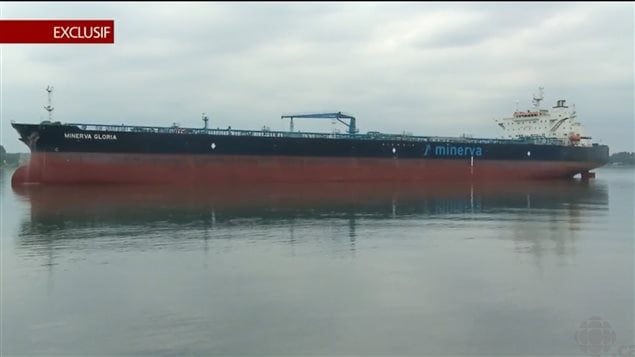 The Minverva Gloria, the largest oil tanker to sail up the St Lawrence. It will be taking some 150-thousand tons of heavy Alberta crude to a refinery in the US
Photo Credit: Radio-Canada

Supertankers in the St Lawrence

Large oil tankers traversing the often tricky currents and narrow and shallow sections of the St Lawrence are not new.

The large ships arrive far up the river to a giant tank-farm transfer operation near the city of Sorel-Tracy, Quebec. Here they offload light crude from abroad destined for the Canadian market.

This week the “Minerva Gloria”, the largest oil tanker ever seen on the river arrived to load up on some 150-thousand tons of heavy crude which has been arriving by rail from western Canada’s oil sands in Alberta.

With a proposed pipeline to bring western heavy crude to the St Lawrence storage and loading operation, Suncor Ltd, says 20-30 such supertankers could be arriving each season.

Residents are concerned about spills from grounding, or a collision with these extra wide ships and the traffic in the narrow St Lawrence channel.

A specialist in maritime transport, Professor Emmanuel Guy of the University of Rimouski, says the current inspection and verification system for ships and transport is of high standards, but notes that that is for current conditions, but if conditions change the situation needs re-examination. He says (translated from French, “ The risk is proportional to the level of the activity. If there are changes and increases in amounts, it’s important to adjust at the time, and not react later”.

Suncor says only double-hulled ships will be used, adding that transporting its diluted heavy crude presents no increased risk over that of current transport of “conventional” crude.