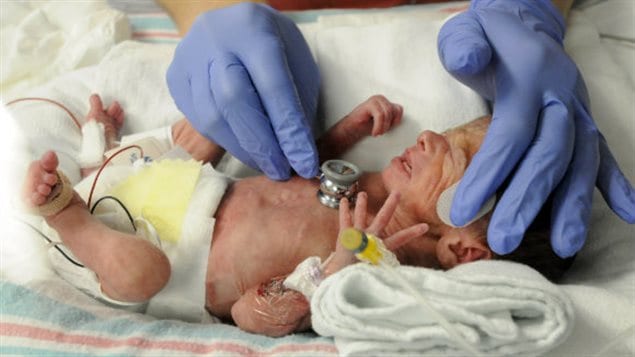 Pain in children is too often not well managed in Canada, according to two new studies. One found great variation between hospitals when it came to deciding whether to medicate and what strength drug to use. The other found that children in hospitals commonly suffer pain, mostly when undergoing routine medical procedures like blood draws, or insertion of intravenous needles.

Until the 1980s it was widely thought that babies didn’t feel pain and often they got no pain medication at all, sometimes even for surgery. That has changed, but experts say there is still not enough being done to mitigate children’s pain.

“What we have learned is that children, particularly young babies and infants are actually more vulnerable to pain experiences than adults,” says Kathryn Birnie, a PhD candidate at the Centre for Pediatric Pain Research at Dalhousie University and IWK Health Centre in eastern Canada. “It can impact how their brains develop, how they respond to pain later in life, and how likely they are to seek medical interventions in the future.”

The centre is a world leader in children’s pain research and draws scientists from several disciplines. For her study, Birnie conducted interviews with children and parents in hospital settings and found pain management to be wanting.

‘We can manage pain better’

“What we learned is that despite all these advances in our knowledge, pain is still a really common experience for hospitalized children…And the reality is that there’s a lot we know can be done to help manage this pain better,” she says.

For example, children can be given topical analgesic creams so that needles hurt less. That could help with the 20 or so vaccines that children routinely get in Canada. Oral pain relievers can be used as well as other techniques like distraction, breastfeeding, sugar water and skin-to-skin contact.

Parents can do a lot to help manage their children’s pain, according to Birnie’s research. “They want to help and there’s lots that they can do, but they may not know how they can go about that or even that they can do that. So we are really focussing on how we can empower parents, with the knowledge that we have from research… to help manage their children’s pain,” says Birnie.

“It’s a really important issue. Optimal pain management is a fundamental human right. And we really need to make sure that children are receiving this as well as anybody else.”

See video called “It doesn’t have to hurt” produced by the Centre for Pediatric Pain Research and IWK Children’s Hospital in the eastern city of Halifax.