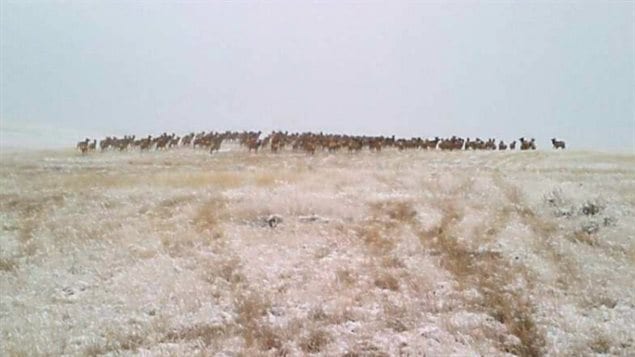 A herd of elk on the wide open practice ranges of CFB Suffield. Neighbouring ranchers say the elk jump fences onto their property eating their cattle grazing area and other crops.
Photo Credit: CFB Suffield

Ranchers in the southern portion of the western province of Alberta say a herd of wild elk on a military base has grown too big and is damaging their grazing land.

A few hundred elk were brought onto the sprawling Canadian Forces Base Suffield  from a National Park in the late 90’s after about 1,200 wild horses were rounded up a few years earlier.

The base wanted grazing animals to keep plant growth on the vast land under control, but ranchers say the herd has grown to several thousand, and they regularly jump the base fence onto their cattle grazing lands or eat the crops.

Both federal and Alberta officials have been working on the issue and having increased hunting permits on CFB property from 200 female elk in 2012, to 300 last year, to 600 this year.

Locals say the elk seem to sense the danger and when hunters are on base property they jump fences onto private and provincial property, and vice versa.

The commander of CFB Suffield, Lt.-Col. Sean Hackett, said the problem is complex because it involves managing wildlife that is under Alberta jurisdiction, but move back and forth from a federal base onto private land subject to provincial law.

In spite of claims by surrounding ranchers that hunting alone won’t solve the problem, Col Hackett says a cull is not being considered.

However, he said a meeting will be organized next month so those concerned can express their thoughts.